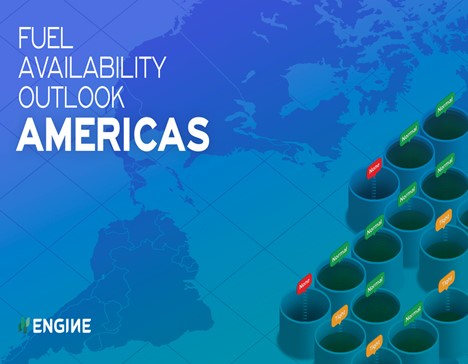 Prompt VLSFO and LSMGO grades are readily available in the Houston area and off the US Gulf Coast. Houston’s VLSFO benchmark fell to nine-month lows earlier this week, before recovering some of these losses.

Bunker availability has remained steady in Houston and New York in recent weeks, with prompt deliveries more readily available compared to other bunker hubs where prompt suppliers are still unpredictable.

All grades remain tight for prompt dates in Long Beach and Los Angeles ports on the US West Coast. Some suppliers in Long Beach have held back prompt VLSFO offers, while another requires at least nine days of lead time.

As the Category 4 Hurricane Ian approached and hit Florida’s coastline this week, bunker operations have been disrupted in Port Tampa Bay and the smaller nearby ports of St. Petersburg and Port Charlotte.

On Thursday, the US National Hurricane Center (NHC) downgraded Hurricane Ian from Category 4 to Category 1 as wind speeds had been reduced after it moved more inland toward Florida. But NHC has warned that a storm surge is expected to continue Thursday and Friday along the coast of northeast Florida, Georgia and South Carolina.

Prompt bunker supplies remain difficult to find in Port Everglades in Miami. Several suppliers are hesitant to confirm delivery dates due to Hurricane Ian. Some buyers are struggling to secure truck deliveries, which are even harder to find now, sources say.

With bunker operations almost at standstill in Florida, vessels have been diverted to other regional ports to bunker. Demand has grown for very prompt bunker deliveries (1-3 days) at ports such as New Orleans, Galveston and Corpus Christi further west in the Gulf of Mexico. These ports have been less impacted by Hurricane Ian.

Some suppliers are offering VLSFO and LSMGO for prompt dates at the New Orleans Outer Anchorage (NOLA).

Availability remains steady across all grades in Mexico’s Manzanillo. Recommended lead times for HSFO, VLSFO and LSMGO are about five days out.

Further north in the Americas, LSMGO supply is tight in Montreal. The earliest delivery date with a supplier is about 8-10 days ahead.

Prompt VLSFO and LSMGO availability is readily available with some suppliers in Panama’s Balboa, while pressure on Cristobal’s smaller number of barges is keeping prompt availability tight there. Meanwhile, one supplier in Cristobal can accommodate some prompt supplies.

VLSFO and LSMGO availability is tight for prompt dates off Trinidad. A supplier is set to receive a resupply cargo in the coming days and requires a lead time of about seven days.

Availability of VLSFO and LSMGO is normal in Colombia’s Santa Marta. The earliest delivery date with a supplier there is about 6-7 days out. Another can offer supply with a shorter lead time.

VLSFO supply has improved in Brazil’s Santos. The earliest lead time with a supplier has halved on the week, to 5-7 days now.

Bunker operations were disrupted in Argentinian ports last weekend, as a tugboat workers union striked over wage disputes. Operations resumed later on Monday after the union called off the strike.

Recommended lead times of VLSFO and LSMGO in Zona Comun are about 6-7 days.

The refinery reportedly produced 7.1 million metric tonnes of low sulphur marine fuel in Q1 2020 and 50,000 mt in March in order to match market demands, it said.

Transoil Laboratory is a transformer and insulating oil testing company based in Manchester, UK.

Newbuildings construct at China Merchants Jinling Shipyard, Yangzhou are designed by Kongsberg and will be scheduled for delivery in spring 2025.