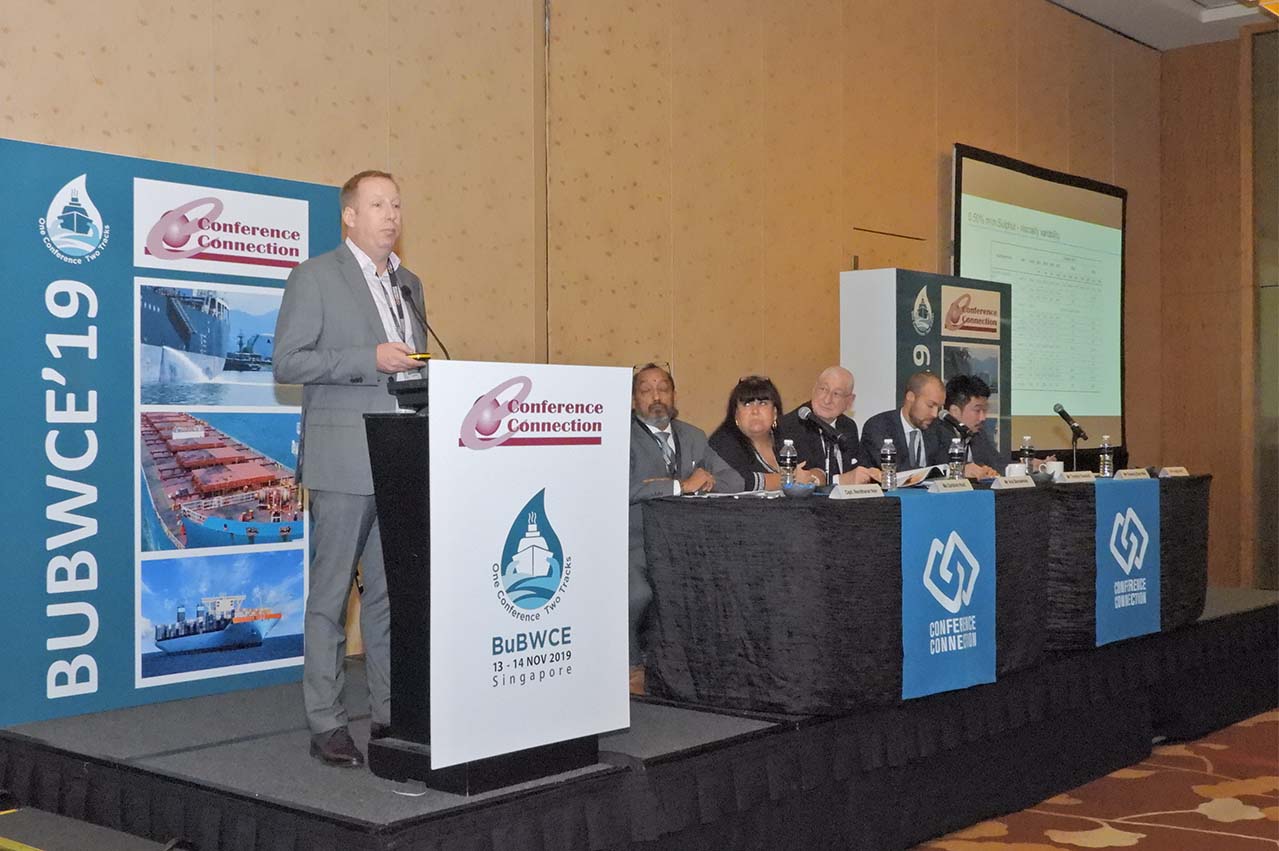 The use of Gas Chromatography-Mass Spectrometry (GC-MS) has now become a mainstay for fuel testing in the bunkering industry due to last year’s phenolic compounds contaminated bunkers, originating from Houston, causing widespread operational and engine machinery problems, he said.

GC-MS offers stakeholders the option to test for the presence of a wide range of chemical compounds to minute levels within marine fuels. For fuel failure investigations it can be useful to ascertain cause and effect when onboard problems arise, however as a predictive tool to gauge whether or not a fuel is fit for purpose “it is a bit more tricky” as the reality of the marine fuel supply chain is that trace amounts of contaminants are bound to enter the fuel pool in one way or another due to cross contamination.

However, there is no need for panic when certain chemicals in fuel has been discovered. Raitt explained, “the presence of chemicals such as DCPD and styrene for example in marine fuels do not always result in a malfunction in engines and its associated components as it highly dependent on the amounts present in the fuel and if in combination with other chemicals in fuels such as for example Indene.”

“In Rotterdam, if you buy bunkers a lot of fuels will contain DCPD and styrene as a function of common cutter stocks used in the ARA region,” he told delegates at the Conference Connection organised event. “The last time I checked the majority of vessels do not experience adverse consequences using these fuels. I do not understand why people are jumping on it.”

Moving forward, Raitt recommends bunker buyers to adopt a more sophisticated approach and include decisions based on knowledge and expertise, besides good pricing, in their marine fuel purchases post IMO 2020.

“Statistically speaking, 95% or more of fuels you buy now are perfectly usable with basic on-board treatment required. Suppliers can provide IMO 2020 compliant fuel but it will be more variable in nature in particular variances in viscosity should be well understood by ship operators. If your ship’s pump cannot handle a certain viscosity – it’s your problem. Ultimately the onus is on suppliers to deliver compliant sulphur content fuel. As to how the general characteristics of the fuel should be for vessel consumption the fuel buyer should define this clearly to the supplier should there be certain limitation for use of the bunkers,” he states.

“Another key issue is two stable fuels doesn’t mean they are compatible. The key is don’t blend fuels on-board and segregation of bunkers is of paramount importance.”

Cat fine off specs nothing ‘too concerning’ when taking ISO 8217:2005 into account, says industry veteran.

With 0.5% marine fuel, HSFO, ULSFO contracts, operators do not just have to accept whatever costs the 2020 changes throw at them, advises Freight Investor Services.