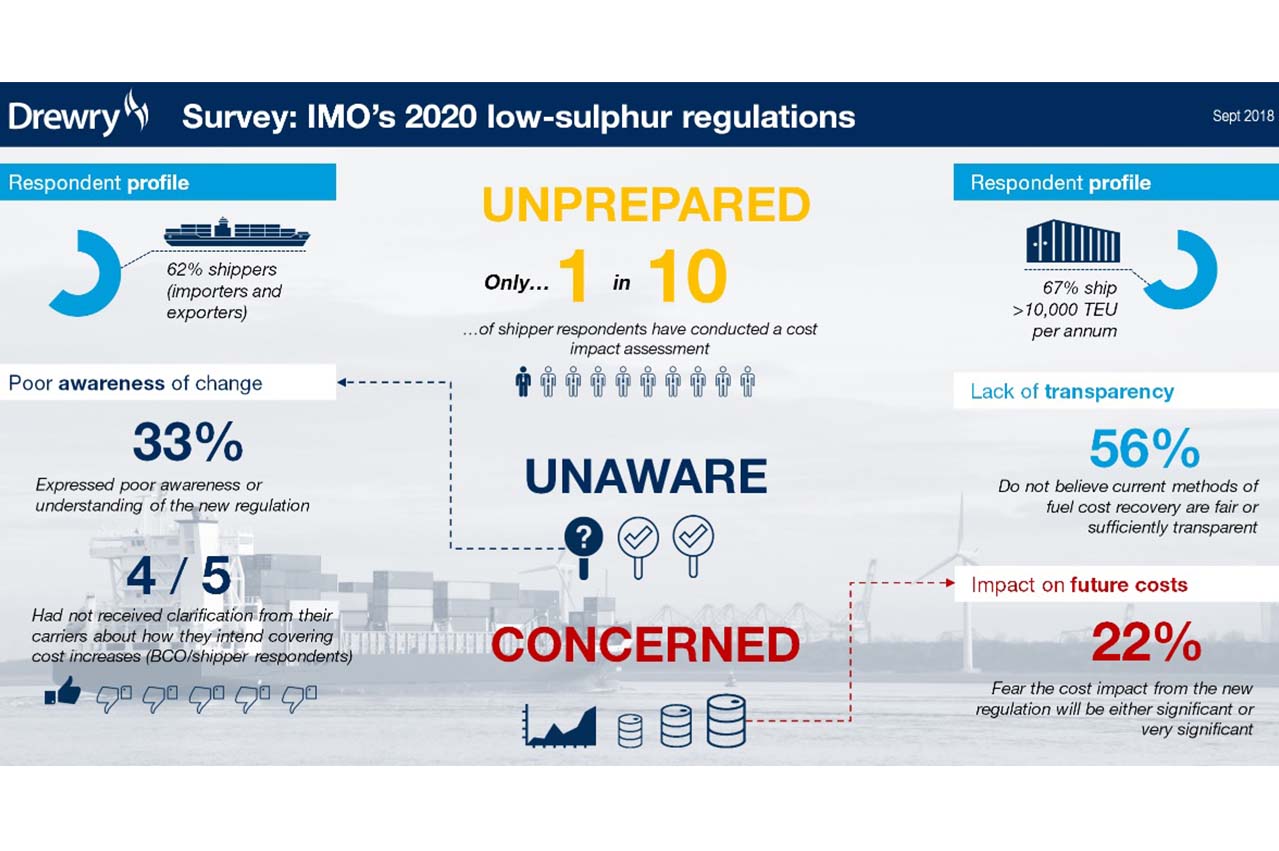 A survey conducted by independent maritime research consultancy has found considerable unease among global shippers/BCOs (Beneficial Cargo Owners) and freight forwarders ahead of the IMO’s 2020 global emissions regulations, due to come into force on 1 January 2020.

Particular uncertainty and concern was expressed by respondents in both the survey and follow-up interviews about carriers’ methods of fuel cost recovery with more than half of all respondents (56%) stating that they did not consider their service providers’ existing approaches as either fair or transparent. Further to this, 4 in every 5 of the shippers/BCOs participating in the survey stated that they had yet to receive clarity from their providers as to how the widely anticipated future fuel cost increases, set to accompany the 2020 regulatory change, would be met.

Despite the significance of the change and the high press and media profile given to the subject in recent months, a surprisingly large proportion (33%) of respondents to the Drewry survey admitted to having poor or very poor awareness and understanding of the new regulation.

In Drewry’s view, the level of uncertainty today as to the total cost impact is so large that nobody is able to provide a confident forecast of the cost of compliance; the only certainty is that the extra cost will run into billions of dollars globally come 2020. Based on independent “futures” prices, low-sulphur marine fuel prices per tonne will be 55% higher than current high-sulphur fuels and Drewry considers that the probable “worst case” scenario is that fuel costs (paid by carriers) and fuel surcharges (paid by shippers) in global container shipping will increase by 55-60% in January 2020.

“At Drewry we are always keen to listen to the concerns of the market and help facilitate dialogue between stakeholders on complex subjects of common interest like the IMO rule,” said Philip Damas, Head of Drewry Supply Chain Advisors.

“The IMO low-sulphur rule change represents a very significant, industry-wide, change event which will likely have far reaching effects on the global shipping industry for many years to come”, continued Damas. “Given the scale of the extra costs triggered by the new regulation and the carriers’ expectations that their pricing and fuel charge mechanism with customers must be restructured, there is a need for carriers to address the transparency concerns expressed by their customers.”

In cooperation with both shipper members of the Drewry Benchmarking Club, and possibly carriers as well, Drewry is working on an IMO low-sulphur rule ‘cost impact tool’ based on robust market data. Fuel surcharges are one of the largest components of container freight costs and, based on Drewry Benchmarking Club data, typically average $150/teu on the major routes from Asia today.

The safety challenges connected with implementation ‘numerous, but not insurmountable’.

Seemingly quick fixes, such as speed reductions, do not incentivize technical progress and switch to new technologies.

Ensure parties pay attention to terms for the purchase and supply of marine fuels to ships after IMO 2020.