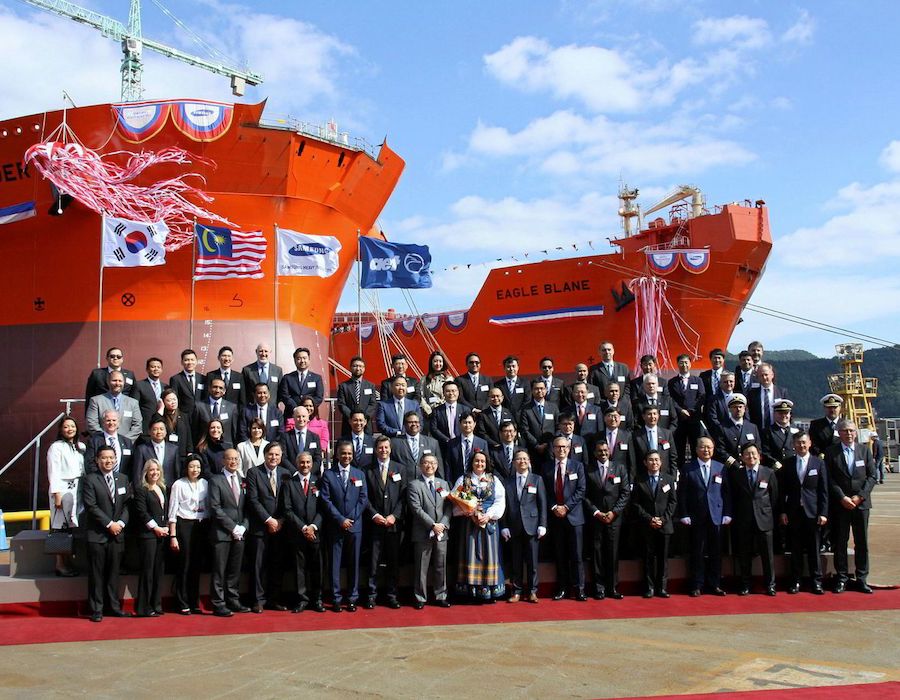 Classification society DNV GL has published an article analysing and outlining how technology can meet environmental targets while boosting the efficiency of shuttle tankers; the article is written by Business Director Tankers, Catrine Vestereng.

AET, one of the leading petroleum tanker owners and operators, has a long tradition of naming its vessels after some of the greatest energy locales, cities or ports in the world. Their latest two dynamic positioning shuttle tankers (DPSTs) will join the “B” ship series and are named after the Eagle Blane and Eagle Balder oil and gas fields on the Norwegian continental shelf.

“These trading areas not only require compliance with the Global Sulphur Cap but also with the new Gothenburg Protocol in force from 2020, which requires volatile organic compound (VOC) emissions to be capped at 131,000 tons per year,” explains John Baptist, Global Director VLCC & Shuttle Tankers, Crude Shipping at AET.

Powered by liquefied natural gas (LNG) as primary fuel, the DPSTs will be able to capture 100% of the harmful VOCs which escape into the air from crude oil cargoes during loading and voyage. The captured VOCs will be used as a supplementary fuel. “These are AET’s first vessels constructed with a VOC recovery system and fuelled by LNG. Being prototype vessels of this type, there were risks. The design and newbuilding teams have worked with all stakeholders to produce a very environment-friendly vessel type,” summarizes John Baptist. “Being part of the VOC reduction initiative makes this project even more exciting.”

Samsung Heavy Industries (SHI) built the shuttle tankers for AET Sea Shuttle AS (AETSS), a joint venture between the Norwegian shipping company ADS Shipping and AET Tankers which is headquartered in Singapore. AETSS is the owner and commercial operator of the vessels. Project management for the newbuilds was provided by MISC Group’s marine services arm Eaglestar and the Norwegian third-party ship management company OSM Maritime. “The shipyard has played an important role during the newbuilding process and maintained an excellent partnership with the classification society, which resulted in high-end technology solutions whilst ensuring regulatory compliance,” Baptist reports. “The collaboration with class in this project was exceptional in terms of the technical review. DNV GL has shown a high degree of technical expertise in defining, analysing and resolving critical design and engineering philosophies to ensure safe operation. For us, our project partners added remarkable value not only to the vessel but also for our company, as it helps us elevate our reputation among the top environment-friendly service providers.” Vidar Dolonen, Regional Manager Korea and Japan at DNV GL – Maritime , said about the project: “With this dual-fuel shuttle tanker project, DNV GL also broke new ground and we collaborated closely with our experts in various disciplines.

The vessels use a more efficient computer-controlled system for dynamic positioning that keeps them stationary above a specified seabed area while loading oil. The combination of LNG fuel, a powerful VOC recovery system and a more efficient dynamic positioning system enables estimated fuel savings of up to 3,000 tonnes per year compared with conventional DPSTs of the same size.

“These vessels are proof that environmental sustainability and commercial viability can coexist and are also testament to the fact that operational performance does not have to be sacrificed in the pursuit of reducing emissions,” Capt. Rajalingam Subramaniam, AET President & CEO and Chairman of AETSS says. “The goal was always to leverage our combined experience of AET, ADS and SHI to develop vessels that really push the boundaries in what is possible in North Sea dynamic positioning operations, and to prove the value of LNG dual-fuel solutions in the energy shipping segment.”

During the naming ceremony in October 2019, Lady Sponsor Ann-Elisabeth Serck-Hanssen, Senior Vice President for Asset Management in Marketing, Midstream and Processing at Equinor, said: “Taking these vessels on a long-term contract will further enhance our ability to provide safe, efficient and cost-competitive energy to our customers, and we are proud to play our part in what is an important step forward in the development of more sustainable energy shipping solutions.”

The two DPSTs will each be propelled by two low-pressure dual-fuel two-stroke engines, which meet IMO Tier III emissions requirements in gas mode without any exhaust gas after-treatment required. Designed for harsh operating conditions, the ships are equipped with latest-generation bow-loading systems (BLS) which offer greater connecting angles, extending the operating opportunities in conditions where shuttle tankers would normally struggle to connect. “The new-generation BLS is capable of connecting the loading hose in wave heights up to Hs = 4.5 m and at an entering angle of 110 degrees,” Stein Are Andersen, Sales Manager Offshore Loading Systems, MacGregor, reports.

Asked about future design and technology developments for shuttle tankers, Baptist believes that green energy will be the top item on the agenda, in particular LNG, VOC and hydrogen as fuels, as well as power generation optimization using variable frequency drives (VFD) batteries. Bow-loading system design has been improving and will continue to evolve to achieve more efficient offshore loading operations. “The demand for shuttle tankers as replacements of ageing tonnage is increasing. In my estimate about 40% of the existing tanker fleet is ready for replacement due to the 20-year age limitation,” Vidar Dolonen points out.