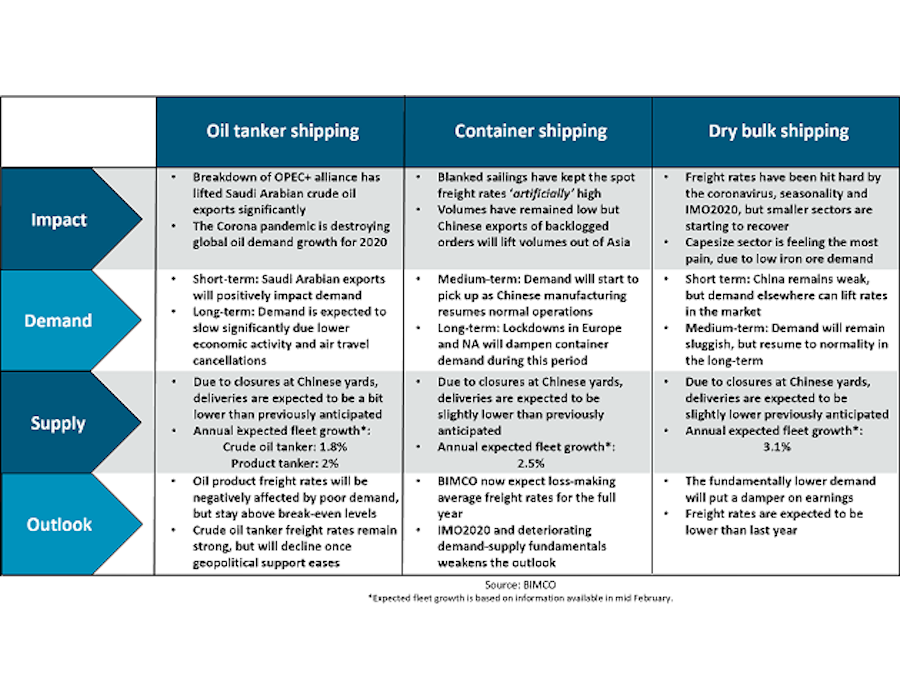 Peter Sand, Chief Shipping Analyst at BIMCO, the largest of the international shipping associations representing shipowners, on Wednesday (18 March) published an analysis on readjusting market expectations in the shipping sector based due to the recent COVID-19 outbreak:

The speed of the virus spread makes it difficult to assess the full consequences. Nevertheless, we see a need to update our 2020 forecast to make some of this massive uncertainty tangible.

What is going on in addition to the coronavirus pandemic?

Geopolitical tensions that made the OPEC+ alliance break down, has subsequently made the crude oil tanker spot freight market erupt. The events that followed the breakdown – and those that are likely to follow, as Saudi Arabia is thoroughly preparing to flood the global oil market – will benefit the crude oil tanker industry specifically while driving fuel costs down more generally, at a time when oil demand generally drops.

In massive contrast to the benefits that the crude oil tanker shipping industry enjoys from the brutal geopolitics of the oil market, there are widespread negative impacts from the coronavirus pandemic.

Moreover, the “Phase One” agreement, of the US-China trade war, is not delivering on its promises. Even before the effects of the coronavirus, the “Phase One” agreement between China and the US failed to boost volumes of the implicated goods in January. This opening is likely to set the tone for the full year. The failure itself is no surprise, but the magnitude of it surely is.

Global economic activity, which slowed down significantly in 2019 will become even lower in 2020. Some nations may even fall into recession. The trade-to-GDP multiplier does not deliver guidance under such extraordinary circumstances which we currently experience.

A call for stimulus

It remains of utmost importance that global political leaders take measures to secure health and safety right now, but also that they prepare for the eventual return to normality – hopefully no later than mid-2021.

Traditional fiscal and monetary stimuli will only partly bring normality back, when the virus is contained. What is needed on top of that are economic stimulus packages which aim at securing the purchasing power of consumers and corporates. Public debt will rise as such measures are costly – but you should worry even more about the future if widespread layoffs and bankruptcies result in a severe global recession.

The service sector of any economy is surely hit the most in the short term. But manufacturing, which matters the most to the shipping industry, is greatly impacted too.

When the dust settles

Slowing globalisation may be even more pronounced than what we have seen in terms of slowdown since the financial crisis of 2008. Increasing protectionist measures may also become more widespread as nations seek to fix exposed vulnerability which the health crisis has made abundantly clear. Global and regional supply chains will be up for a review and while some will alter, some of the changes will benefit shipping demand while others won’t. This crisis has exposed several unwanted vulnerabilities to supply chains as we know them today.

The trade-to-GDP multiplier may yet again provide guidance to the direction of shipping demand stemming from global economic activity. Coming down from an average multiplier of 1 (2002-2008) to an average of 0.85 (2011-2020F), BIMCO expects the multiplier to stay below 1.

With COVID-19 infections escalating, stringent measures have been put in place; short-term visitors from affected areas not allowed to enter or transit through Singapore.

Attacks on tankers deepen tensions between Iran and the US, which have gradually escalated in 2019.