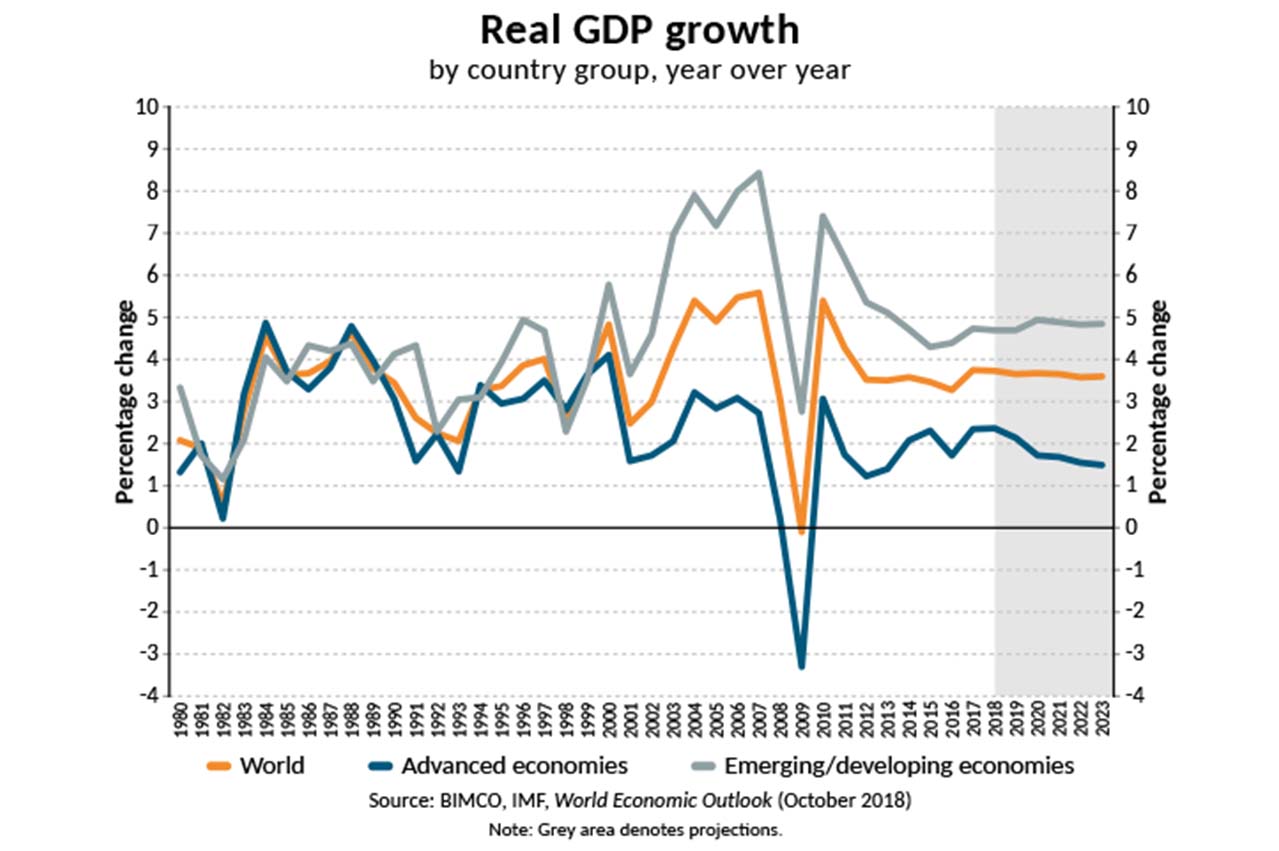 This article contains extracts from BIMCO’s Reflections 2019, which will be available in full on 2 January 2019 on www.bimco.org and will be sent out to all BIMCO members alongside their free member copy of BIMCO’s Holiday Calendar 2019.

Where do we go to find economic growth that spurs shipping demand in the next five years? According to the International Monetary Fund (IMF), we should look towards emerging and developing countries. The IMF also points out that advanced economies’ growth is on a downward trend and has been so since the mid-2000s.

Such a development affects every shipping sector across the globe – in different ways, naturally. Dry bulk demand is supported by such a trend, whereas container shipping will see demand growth rates come under further pressure. Oil tankers may find it somewhat bittersweet, as demand generated in the East may be dented by a contraction in the West.

In the corridors, we find the ghost of the trade war impacting the entire shipping industry and so much more. Will 2019 see an unravelling of it? Of that, we are unsure. But it takes time to get things right once they have gone so wrong.

Many geo-political obstacles are in the way – the trade war between the US and China being just one of them.

Dry Bulk – no fundamental market balance improvement in 2019 What are the main risks to this outlook? First is the shifting interest from imported iron ore towards scrap metal that we have seen over the past 1½ years from Chinese steel mills. This is a massive threat to the Capesize market. 2018 is a turning point in this matter, as Chinese seaborne imports are down year on year for the first 10 months of 2018.

Second, for the Handymax and Panamax sectors, the uncertainty is linked to the development of the trade war between the US and its main trading partners, chiefly China. Agri bulks have taken centre stage in 2018, and US soya bean exports star in a leading role – by being all but absent. Trading lanes change, and volumes are lost. It looks like a turning point for soya beans as well. What remains certain is that China decides the destiny of the market, under heavy influence from the trade war with the US.

Oil tankers facing more headwind 2018 has been a horrific year. Probably the worst ever. Crude-oil tanker operators have been particularly hard hit – the larger the ship, the lower the earnings. A market displaying those characteristics is truly in bad shape. October delivered a sudden reversal of fortunes, but no fundamental market balance changes that fast. Rest assured that 2019 will prove to become a difficult year for the crude-oil shipping sector too – the icing on the cake being US sanctions on Iran. These impact not just the oil market but – to some extent – crude-oil tanker trade lanes.

A four-year, low fleet growth in 2018 cushioned some of the downfall of a weak demand side, but the aftermath of two years with a fleet growth of 5-6% proved too heavy to stem.

BIMCO believes the massive demolition activity seen in 2018 will not be repeated in 2019. We expect earnings to improve from the lows of 2018 and, as a result, owners will lose interest in selling ships for scrap. Fleet growth is expected to exceed 2%. The market improvements will come from increased demand from new refineries coming online in China and increased US exports. Combining the two demand drivers, we end up with a powerful cocktail that will benefit crude-oil tankers strongly. However, don’t bet the farm that this will happen.

When it comes to oil-product tankers, outlook is slightly more positive, but for different reasons. Low fleet growth has teed up the market for improved earnings in 2019 when compared with the lows of 2018. The market was bad, but not as bad as the crude-oil tanker market. One of the potential positive triggers in 2019 is likely to be distribution of IMO 2020-compliant fuels. To what extent this will boost the market depends highly on actual availability and production of fuels from the global refineries.

Container shipping: fleet growth takes centre stage On the whole, 2018 turned out to be a disappointment, but it did have a few shiny moments. It was most impressive to watch inbound-loaded container imports on the US east coast grow by +8% on top of the 10.1% growth experienced in 2017. On the US west coast, volumes did not impress, but spot freight rates nevertheless hit a five-year high in October for the Shanghai to USWC trade lane.

Among the disappointments was the development of fleet growth. After two busy years, demolition interest evaporated completely in 2018 hitting a 10-year low. This caused fleet growth to rise higher than demand. The continued inflow of very large containerships onto the Far East to Europe trade lane meant cascading making a return to the stage.

Looking ahead to 2019, fleet growth takes centre stage when it comes to market fundamentals. If only judged by new-builds, it’s clearly positive, but remember, 700,000 TEU are idle in today’s market. If the lion’s share of that is reactivated – which it will be as soon freight rates just go up slightly – expectations may be reversed. Our hopes for a rise in demand are muted by the ongoing trade war and the GDP growth of the advanced economies.

Volume growth on long-distance trades will be more critical than ever, as fleet growth is focused to fit into them. Intra-Asian trades, where most containers of any other place are moved, will also suffer if the front-haul, transpacific cargo flow stays dented because of tariff walls on either side of the Pacific.

Will containers on rail continue to have growing significance? That will largely depend on a continued Chinese subsidy to support it. It’s not massive, but it certainly takes away much- needed volumes from the ocean.

Industry association has studied the European Commission’s “Fit for 55” package and highlights a number of potential consequences and concerns.