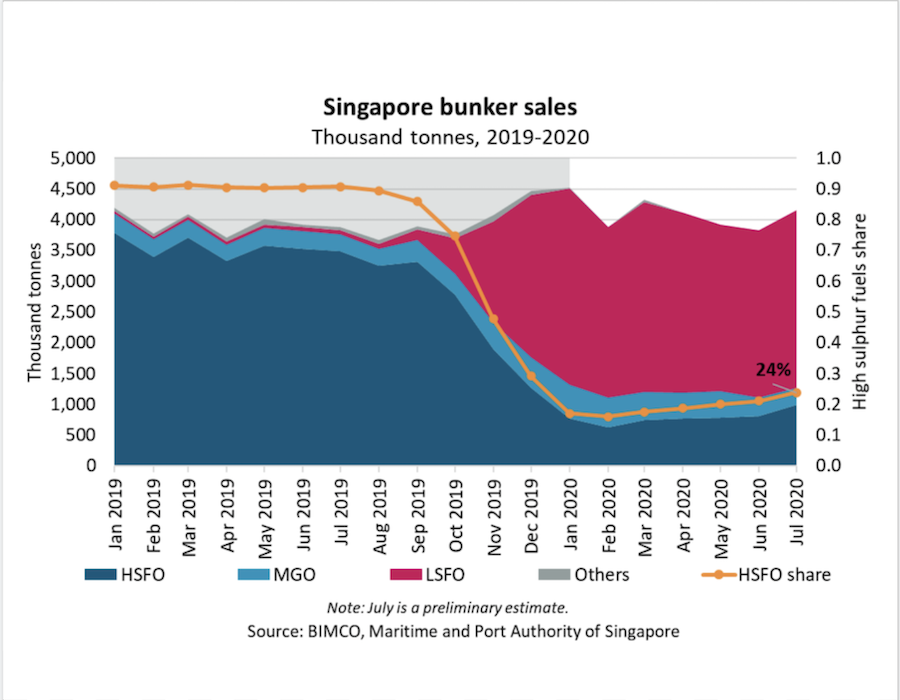 BIMCO, on Wednesday  (19 August) published a report explaining the recent rise in HSFO bunker sales in Singapore and why this reaffirms its predictions that HSFO sales will continue to increase despite the implementation of the IMO 2020 sulphur cap:

Despite overall uncertainty in the markets, and low demand for shipping, total bunker sales in Singapore reached a four-months high in July. The month showed a 7% growth in total bunker sales compared with the same period last year, and 8.5% growth from last month, with total July bunker sales reaching 4,157.7 thousand tonnes.

“Some pundits argued that the IMO 2020 sulphur regulation would be the demise of high-sulphur fuel oil for the global shipping industry. BIMCO argued differently, and the fact that high-sulphur fuel oil sales now amount to 24% of total sales has not taken us by surprise,” says Peter Sand, BIMCO’s Chief Shipping Analyst.

“In fact, we expect that the share taken up by high-sulphur fuel oil sales will continue to rise as this year progresses, due to a larger share of the fleet getting scrubber-fitted,” Sand says.

Low-sulphur fuel oil refuels the lions’ share of the fleet

Implementation of the IMO 2020 global sulphur cap saw a major disruption in the share split between high-and low-sulphur fuel oil, with the latter taking up 84% of the share in February. In recent months, the share of total sales occupied by the low-sulphur fuels has declined to 76% in July. The change mirrors the rise in the number of ships fitted with a scrubber.

Annual general meetings of companies/creditors will be held electronically on 31 August for An Hui Shipping Pte. Ltd. and Nan Yi Maritime Pte. Ltd., according to notices.