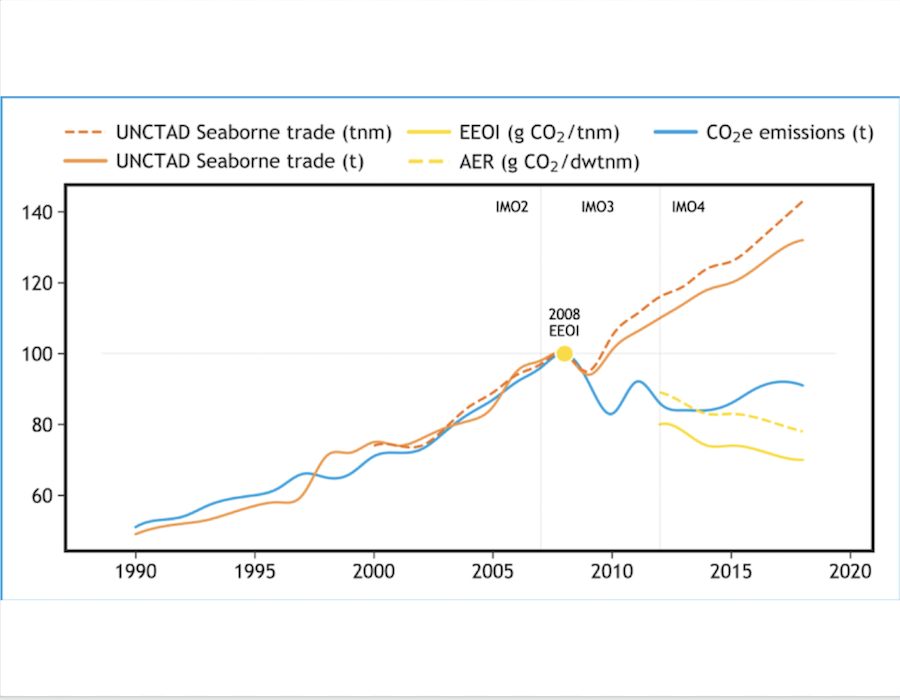 The September issue of BIMCO Bulletin published an article by Deputy Secretary General, Lars Robert Pedersen who outlines why it would be more productive to look at certain ‘snapshots’ in time rather than a continuous period when analysing data for emissions from shipping to gain any meaningful insights, as ‘decoupling’ for world trade and emissions has occurred – meaning that they are no longer directly correlated:

At the launch of the Fourth International Maritime Organization’s Greenhouse Gas Study, eyes rested primarily on the fact that CO2 emissions from the shipping industry rose between 2012 and 2018. The focus on this six-year period diverted attention from what should not have been missed – the year 2009.

When world studies come to conclusions and make predictions about temperature trends, sea levels and so on, they are best made after reviewing a long period rather than an isolated snapshot of time. Doing so avoids temporary fluctuations and gives a clearer picture of overall development.

Why then, do so many conclusions of the Fourth Greenhouse Gas Study (GHG) focus on a period limited to six years?

It is indisputable that emissions from shipping rose between 2012 and 2018. The graph below illustrates it well. We need to know emissions levels from year to year, but what we have to remember is that the two previous GHG Studies also looked at earlier years with some overlap. The 2012 to 2018 period is a continuation of this effort to establish historical annual emissions levels.

Problematic at best, misleading at worst

However, looking at 2012 to 2018 in isolation when coming to conclusions is problematic at best and misleading at worst. Over short periods, the economy fluctuates and emissions fluctuate with it. We have financial crises, ups, downs and, now, a COVID pandemic. World trade, demand, gross domestic products and emissions are all affected by such factors.

Sometimes, it can be insightful to pick and choose a fixed period to understand what happened at a point in time and why. But to draw conclusions about the overall trend in emissions from the shipping industry based on just six years is, in my opinion, misleading.

Studying the graph below, the period from the baseline year of 2008 illustrates that emissions from shipping have indeed fluctuated. As mentioned above, they can change year on year as a result of many factors. In fact, we can be pretty sure that 2020 emissions will show a fall – a direct result of the COVID-19 pandemic’s effect on production activity and world trade.

To conclude that overall emissions are on the rise based on a six-year snapshot is missing the point. The broader picture is a trend of shipping emissions continuously below 2008 levels.

From 1990 to 2008, emissions were steadily rising, with ups and downs along the way, but, in 2009 something interesting happens: the correlation between trade and emissions breaks. The dotted orange line on the graph – seaborne trade per tonne mile – illustrates that trade and emissions were in sync from 2000 and all the way to 2009. Then, they break apart – they decouple.

In climate policy, to decouple economic development from emissions is a pretty big deal. This is exactly what the shipping industry has done, and the mere fact that it is happening is a tremendous achievement.

While this is indeed encouraging news, it is not enough for the shipping industry to meet its ambition of halving emissions from 2008 levels by 2050. Much more needs to be done, but we have a very good starting point for that discussion, and meeting the target is achievable.

For now, rather than focusing on the rise in emissions between 2012 and 2018, we should focus on the fact that the decoupling is a reality in our industry, look ahead and put all our energy into finding solutions to reach the next important milestone.

The industry must be able to build zero-emission ships in this decade to accelerate the decoupling of trade and emissions.

International shipping emissions and trade metrics, indexed in 2008, for the period 1990-2018, according to the voyage-based allocation of international emissions.