BIMCO: 47% of all newbuilt dry bulkers delivered in 2020 fitted with scrubber 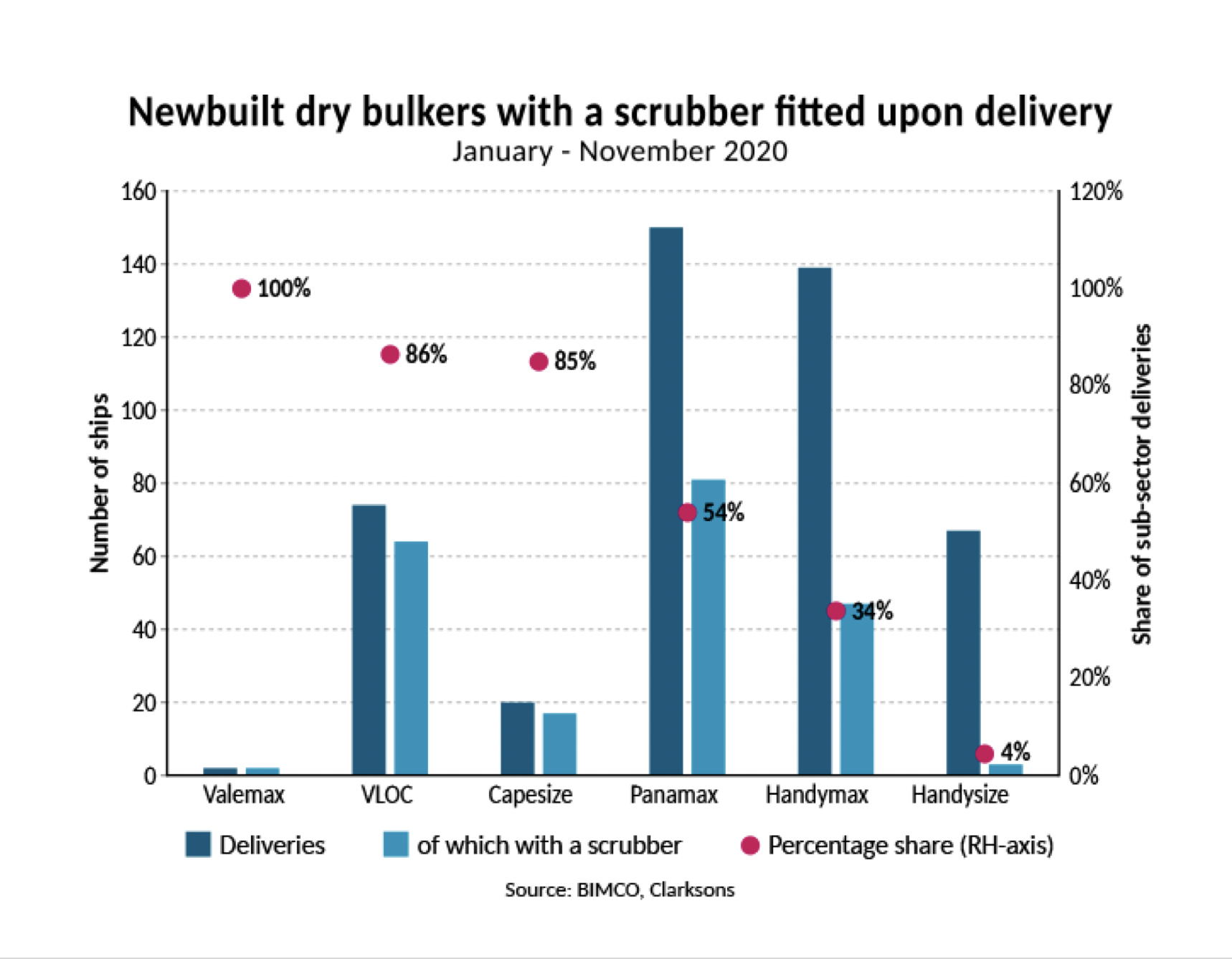 International shipping association BIMCO on Thursday (3 December) published its observations regarding vital statistics found in scrubber fitted vessels versus non-scrubber fitted ships throughout 2020 given the narrow spread between LSFO and VLSFO throughout the year; it was written by Peter Sand, Chief Shipping Analyst at BIMCO.

We have known it all along; the bigger the bunker fuel consumption of the ship, the more likely it is that shipowners will choose an SOx scrubber as the tool to comply with the IMO 2020 sulphur cap.

Whiles only three Handysize bulkers in total have been delivered from the newbuilding yards with a scrubber fitted in 2020, one in three Handymax bulkers were delivered with scrubbers installed.

Most scrubber-fitted bulkers were delivered in the Panamax sub-sector, that saw 81 units out of 150, equal to a share of 54%, confirming the clear-cut tendency among the newbuilt deliveries that we have seen during the first 11 months of 2020.

When considering the share of scrubber-fitted ships within the large sub-sectors, comprising of capesize, Very Large Ore Carriers (VLOC) and Valemax, that share ranges between 85% and 100%. In just 13 cases out of the 96 ships that burn the most fuel, the shipowner opted for using Very Low Sulphur Fuel Oil (VLSFO), instead of making the scrubber investment.

“Clearly, the marine bunker fuel price spread between low sulphur fuels and heavy sulphur fuels has been lower than initially expected. Currently at USD 72 per MT in Singapore, the spread is a far cry from the pre-IMO 2020 average of USD 185 per MT seen between 1 August and 31 December 2019,” says Peter Sand, BIMCO’s Chief Shipping Analyst.

“It is still worthwhile to mention that 2020 year-to-date average spot market earnings for a scrubber-fitted capesize have exceeded that of a non-scrubber fitted capesize by USD 2,818 per day (+27%),” says Sand.

Attached table outlines North’s updated insight on the stands taken by ports that have or will prohibit the use of scrubbers, or have placed conditions on their use.

Scrubber technology firm explains why 2020 will see a second wave in scrubber orders when shippers seek solutions to the ‘headaches’ of compliant fuel.