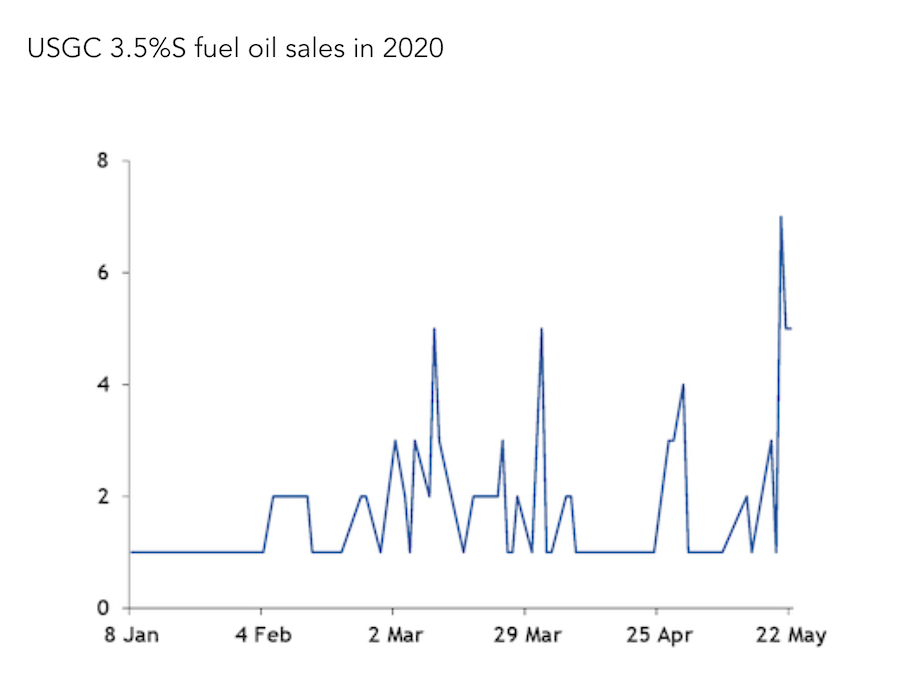 Kayla Meyertons of global energy and commodity price reporting agency Argus Media on Tuesday (26 May) published an article analysing the sudden outburst in HSFO trades at the US Gulf Coast last week as the arrival of June’s fuel imports loom ahead:

An armada of fuel oil cargoes headed to the US Gulf coast next month is prompting a flurry of high-sulphur fuel oil (HSFO) trades in the region after months of subdued trading activity.

As many as 16 45,000 bl barges of HSFO traded in the US Gulf coast last week, marking the highest liquidity seen in the market so far this year. Before last week’s activity, trades averaged five barges per week, with some weeks having as few as one to three trades, according to Argus daily market surveys.

This strong selling interest may be an attempt to free up onshore storage space ahead of a surge in June imports. Up to 25 cargoes totaling 9.75mn bl of HSFO and one 220,000 bl cargo of low-sulphur fuel oil (LSFO) are set to discharge in the US Gulf coast by the end of June, according to oil analytics firm Vortexa.

One counterparty sold 13 of the 16 HSFO barges in last week’s trade, totaling 585,000 bl. The counterparty is due to receive approximately 690,000 bl of HSFO from Russia on the vessel Clio, which is expected to offload in Houston, Texas, on 6 June, according to Vortexa data.

In addition, the Mikela P is expected to arrive in Good Hope, Louisiana, on 11 June with 930,000 bl HSFO, and the Navig8 Precision is expected to reach Houston on 9 June with 675,000 bl HSFO. Other fuel oil cargoes headed for the Gulf coast region by next month include the Minerva Gloria, the Blackcomb Spirit, the NS Antarctic and the MT Sea Beech.

The imports will arrive during a period of high domestic fuel oil inventories. US fuel oil stocks rose to 37.4mn bl the week ending on 15 May, a three-year high, according to the US Energy Information Administration (EIA). US Gulf coast fuel oil stocks settled at 20.7mn bl for 15 May, a 21% increase from year-ago levels. Inventories swelled when the Covid-19 pandemic hampered global trade demand, forcing most refiners and traders to fill onshore tankage or push barrels out to floating storage.

A narrower contango may also have added to selling interest. US Gulf coast 3% sulphur fuel oil front-third swaps averaged a contango of $1.17/bl so far in May, down from April’s average of $2.13/bl. A wide contango in March and April had compelled many to store fuel oil, and the narrowing contango in May was for some a signal to sell.

For the buyers, last week’s purchases may be well-timed for a recovery in marine fuel demand. Reduced lockdown measures in the US led to increased economic activities over the past few weeks, and any increased movement of goods will lead to more vessels worldwide burning fuel. HSFO can be burned on vessels equipped with open-loop scrubbers or used as coker feedstock in a refinery.

Higher fuel oil prices may suppress buying interest in the coming weeks as well. Fuel oil barge prices have risen in recent weeks following crude gains. Gulf coast HSFO has averaged $22.93/bl so far in May, up by 32% from April values but still down by 62% from year-ago levels.

Whether viewed as regulatory compulsion, stakeholder activism or corporate mission, ESG compliance is the new frontier of the maritime and commodities sectors, it says.

‘A fuel standard addressing ships instead of fuel suppliers will be hard to enforce and may not deliver its environmental objectives,’ says ECSA Secretary-General.