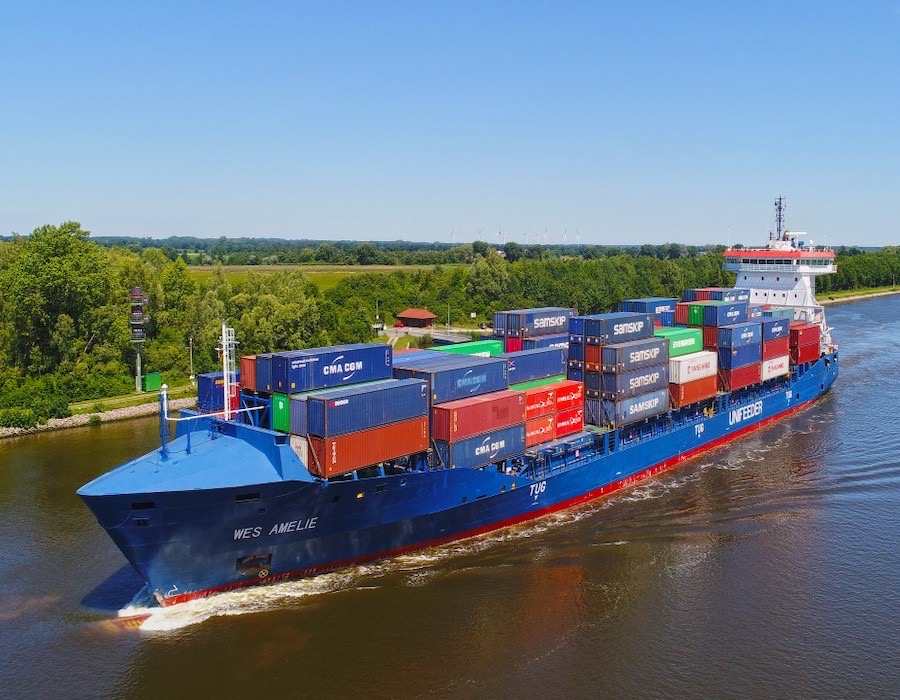 Unifeeder, the operator of the LNG retrofitted Wes Amelie and first adopter of LNG as marine fuel in the European container feeder segment, must be quite satisfied with the bunker costs of the vessel in 2019.

MV Wes Amelie, a 1.000 TEU container feeder vessel converted to LNG operation in 2017, is operated in one of Unifeeder’s widely ramified feeder network in the North and Baltic Sea and frequently calling Rotterdam as its main port. From Rotterdam the vessel is passing the Kiel Canal and serving several ports in the Baltic. After each round voyage, which takes between 12-13 days, the vessel receives an average of 130 tons of LNG per bunkering. Since July last year LNG bunkring can be done ship-to-ship. So, on that particular service the vessel consumes an average of 10 tons per day and that consumption per day applies to the full year.

In 2019 the generated saving in bunker costs, LNG versus MGO, was approximately 2.750 EUR per day, almost one million EUR the year. And that does not include the extra savings generated due to rebated harbor dues. This saving potential makes the vessel quite attractive and explains, why the vessel is in her third consecutive time charter year with Unifeeder.

It’s quite simple, the bigger the price gap between LNG and low sulfur fuels are and the higher the consumption is, the better is the saving. The price for LNG was, on average, on the lower side in 2019. And this flat price scenario obviously remains in 2020. Today, January 12th, “usually” a cold season in the northern hemisphere, the TTF is extremely low with 11,80 EUR per mWh. Twelve days ago, the price gap in Rotterdam between a delivered ton of LNG and a ton of MGO was around 235,00 EUR, on an energy content basis the cost advantage was even apprx. 315,00 EUR.

Competitive prices, that is one of two important elements that the ongoing spread of LNG as marine fuel needs. And the price for LNG definitely is competitive to conventional fuels, even against heavy fuel oil. And the other element, which is the LNG bunker infrastructure, is developing quite dynamically with a number of orders placed.

A view into the order books of the shipbuilders around the globe shows, that LNG powered vessels are increasingly represented. That presently applies more to vessel segments which are predestined for the use of LNG, segments that are predominantly operating intra-regionally. We already see container feeder vessels, chemical tankers, cement carriers, ferries, cruise vessels, dredgers and even authority vessels that are using LNG as fuel. And globally operating vessels are following, the ULCC ‘CMA CGM Jacques Saade’ is quite an impressive example and even bigger bulkers are already using LNG.

At Wessels Marine we see a huge potential for further LNG powered vessels, predominantly in Europe with just a little time lapse of course also in Asia and the Americas. The LNG bunker infrastructure is the determining factor and presently Europe provides the highest coverage of LNG bunker opportunities, but other regions are catching up.

With remaining sustainably attractive on the price side, the necessary extra investment for the LNG propulsion can be amortized within a reasonable period. In Europe LNG as marine fuel has basically been established and with each new bunker vessel in place it becomes more and more attractive. Where scrubbers offer commercial advantages only, LNG adds to the commercial advantage a significant improvement to the environment and, even more important, opens the door to carbon neutral transportation, a goal we all should aim for.

Six memoranda of understanding are to establish industrial facilities and complexes in Sokhna zone to produce green fuel for ship bunkering, amongst other uses.

3,000 m3 capacity LNG bunker tanker will be the first such vessel in Greece and Eastern Mediterranean.

Hapag-Lloyd to use advanced biofuels for transporting DHL shipments

Both hope to pave the way for Book & Claim and insetting mechanisms to make it easier for shippers to use sustainable fuels, said DHL Global Forwarding’s Dominique von Orelli.