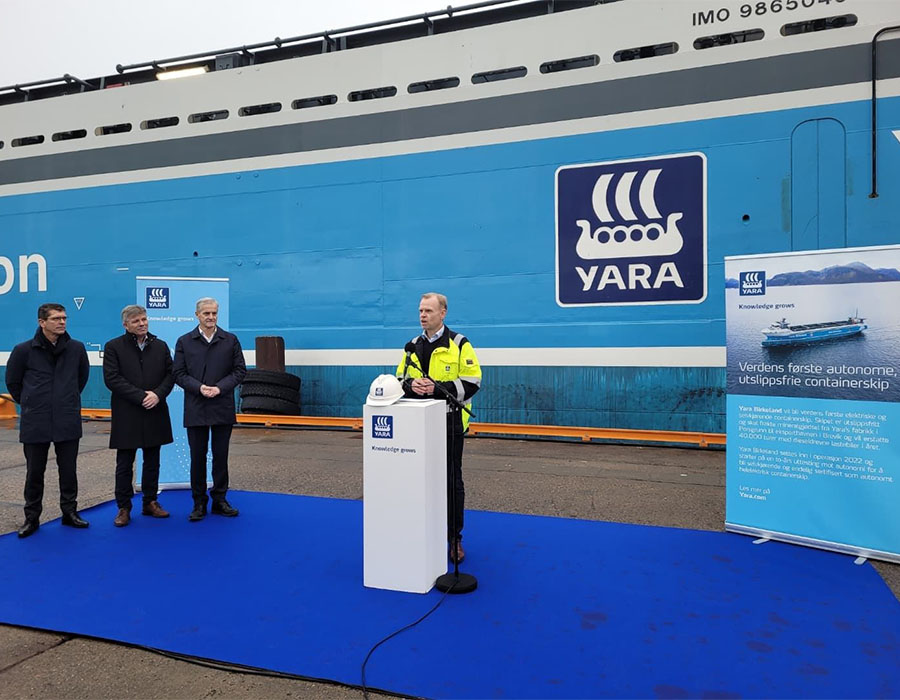 “We are proud to be able to showcase the world’s first fully electric and self-propelled container ship. It will cut 1,000 tonnes of CO2 and replace 40,000 trips by diesel-powered trucks a year,” says Svein Tore Holsether, CEO of Yara.

He welcomed Prime Minister Jonas Gahr Støre and Minister of Fisheries and Ocean Policy Bjørnar Skjæran on Yara Birkeland, after the ship completed its maiden voyage to Oslo, Norway.

Yara Birkeland has been developed in collaboration with the Kongsberg Group (KONGSBERG). The ship was built by VARD with financial support from Enova, and will be in commercial operation from 2022.
“We have been looking forward to this day for a long time. Yara Birkeland will transport mineral fertilizer between Porsgrunn and Brevik and will contribute to significant emission cuts during transport,” says Holsether.

“This is an excellent example of green transition in practice, and we hope this ship will be the start of a new type of emission-free container ships. There are a lot of places in the world with congested roads that will benefit from a high-tech solution like this.

“Now begins a two-year testing period of the technology that will make the ship self-propelled, and finally certified as an autonomous, all-electric container ship.” Yara Birkeland is a collaborative project between several actors, where KONGSBERG is responsible for the development and delivery of all newly developed technology on the ship.

The ship will be operated from Massterlys’ monitoring and operations center in Horten. Massterly is a joint venture between KONGSBERG and Wilhelmsen.

“Norway is a big ocean and maritime nation, and other nations look to Norway for green solutions at sea. Yara Birkeland is the result of the strong knowledge and experience we have in the Norwegian maritime cluster and industry,” adds Geir Håøy, CEO of the Kongsberg Group.

“The project demonstrates how we have developed a world-leading innovation that contributes to the green transition and provides great export opportunities for Norwegian technology and industry.”

Enova, a government enterprise responsible for promotion of renewable energy, has allocated up to NOK 133.5 million to build the world’s first electric and autonomous container ship.

“On the way to a low-emission society, transport emissions must come down to almost zero. To achieve that, we need projects that can transform the market – projects that have the potential to pave the way for others and increase the pace of change in their sector. This is exactly what we believe the world’s first autonomous and all-electric container ship will do,” says Nils Kristian Nakstad, CEO of Enova.

Green shipping is the future

In parallel with the construction of Yara Birkeland, Yara has initiated the development of green ammonia as an emission-free fuel for shipping, through the newly started Yara Clean Ammonia.

“Renewable energy was our starting point in 1905. Now, ammonia can bring us back to our roots. Our large shipping network and existing infrastructure means that ammonia has the potential to become the leading fuel for long-distance shipping globally,” says Magnus Krogh Ankarstrand, CEO of Yara Clean Ammonia.

As the world’s largest producer of fertilizers, Yara relies on ammonia to make fertilizer, and to help feed an ever-growing population. At the same time, current ammonia production represents 2 % of the world’s fossil energy consumption. Corresponding to about 1.2 %of the world’s total greenhouse gas emissions. “As the world’s largest producer of ammonia, Yara has launched an offensive plan of international scale, both to remove current emissions and to establish the production of new, clean ammonia,” says Ankarstrand.

FPS will strengthen the FLAGSHIPS consortium and expand its green hydrogen-fuelled fleet with the “FPS Waal” that will be converted to a zero-emission container vessel.

380cst HSFO backwardation narrowed to over a two-month low of $5.75/t on analyst and trader expectations of higher supply flows to Singapore.