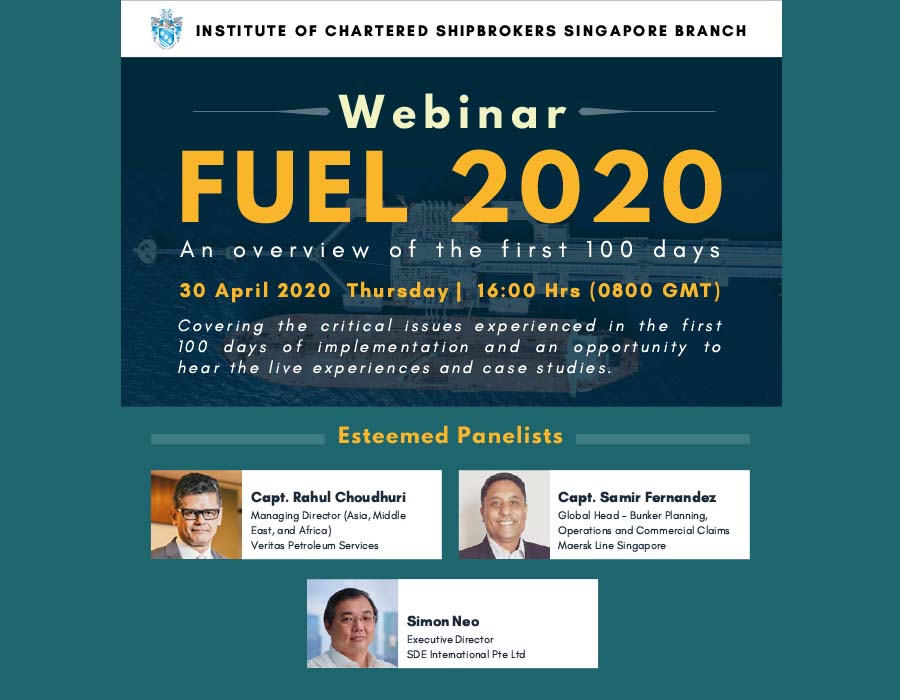 “I do feel going ahead, a potential solution is in the introduction of robust data analytics in marine fuel quality management and its role on how shipping manages marine fuels,” he suggests.

“But, on the quality part, we have seen some pour point issues since December 2019 till January 2020 where it is believed certain cargo traders may have used bunker blends containing waxy residues and components combined with an unsuitable pour point,” he explains.

“This has resulted in some debunkering cases taking place, where I have personally seen two.”

Neo further noted the sulphur content found within marine fuels delivered at Singapore port to be edging close to IMO 2020 limits – between 0.47% to 0.49% – and advised stakeholders to take note.

“The first 100 days were very interesting times due to the coronavirus, the closure of several ports, and the financial troubles faced by Hin Leong,” he says.

“It seems all the problems of the oil and shipping sectors are happening at the same time. This is not very good news for both industries but let’s hope they will be able to move forward when the market reopens.”

“But for us at Maersk it has been two years in the making. The first batch of VLSFO bunkered by a Maersk Line vessel was carried out in March 2019 and this vessel continued to trail different batches right until the switchover date,” he said.

“We learnt from our mistakes and we corrected them. Our colleagues in Fleet Management developed ship implementation plans and tested them on 25 vessels while our colleagues at sea provided feedback on what fuel worked and what did not; including what every vessel had to do when it came to the switchover date.

“IMO 2020 was the perfect example of ‘One Maersk’ – we came together to achieve a seamless switch. With approximately 700 ships there are challenges and one of the biggest things we learnt during preparation is being far more careful when switching between two batches of VLSFOs. Previously, with heavy fuel oil, such issues were minimal.

“The preparation we spent on research and development truly paid off and allowed us to switch to IMO 2020 compliant fuels without any disruption whatsoever.”

The session progressed to Captain Choudhuri enquiring with Neo and Captain Fernandez on respective actions taken by Singapore bunker suppliers and Maersk Line in preventing the delivery and acceptance of off-spec marine fuel.

Neo pointed out certain Singapore bunker suppliers taking an interest in testing their own bunker samples due to IMO 2020.

“A solution implemented by some physical suppliers was to test samples after loading in an effort to detect off-spec or contaminated fuel,” he said.

“This is not a fool proof solution due to the quick barge turnover times in the Singapore market. Occasionally, within a 24-hour period, the fuel will have already been delivered before test results are out so that is the challenge.

“If more suppliers continue to test samples to show quality is being delivered, ship owners will feel safer to take bunkers here in Singapore.”

Captain Fernandez, meanwhile, said Maersk has implemented a “3 lines of defence” to ensure that no oil is consumed without its quality being verified at multiple points across the bunker value chain as part of a company policy.

“Way back in October 2019, we decided any fuel consumed on a Maersk Line vessel has to be tested three times beforehand. The steps consist of test information from the COQ (Certificate of Quality), barge pretesting and post supply testing,” he said.

“It is this stringent system of testing that has allowed us to put about 3,000 stems of VLSO on our vessel without any major quality issues.”

The webinar moved on to cover COVID-2019 and its effect on the Singapore bunkering sector.

An earlier Manifold Times article written in mid-April found bunker surveyors not being allowed to board some bunker tankers due to social distancing policies implemented by their bunker supplier owners/charterers – which contravened the procedures of SS600 and SS648.

Neo noted some bunker suppliers have since introduced a solution to overcome the problem.

“Quite a number of bunker suppliers have now set up a bunker station outside the accommodation area where the bunker surveyor, chief engineer and cargo officer can gather to inspect and witness activities on board the bunker tanker,” he shared.

The panellists ended the session by answering questions from the audience where a member asked about the long term effects of VLSFO, a fuel well documented with stability and wax concerns, being stored on board vessels during a long term layup or storage situation.

The global imbalance between oil supply and demand due to COVID-19 has recently led to the increased use of oil tankers (which contain VLSFO in their bunker tanks) as temporary offshore storage facilities for crude oil.

“We do feel even one month of VLSFO storage can be too long. However, these are very early days and we are going into unknown territory,” said Captain Choudhuri, whose company recently introduced a service that tests and monitors marine fuels under long term storage conditions.

“It is important to know the blend mix before deciding whether the fuel should be stored. More than important is to make sure all recommendations of the fuel analysis report, such as storing the product at the right temperature well above the pour point and correct handling procedures, are followed,” he advised.

“Since this is a new development, the most important is to test and draw samples to verify that the fuel is still stable and the quality hasn’t deteriorated.”

“A lot of the vessels in the past did not encounter issues when using HFO a month after picking up the fuel. Last time, there were no issues as HFO was only one product,” he said.

“Today, we do not know the components going in to reduce sulphur content of the fuel [VLSFO]. I agree with what Captain Samir says, where the stability for bunkers will need to checked and tested especially in layup conditions.”

Due to ban of Qatar Petroleum vessels from using Fujairah as a bunkering location, says Chief Executive.

Enters initial feasibility study with MAN Energy Solutions to defining the scope and limits of the project, the division of work and respective responsibilities.