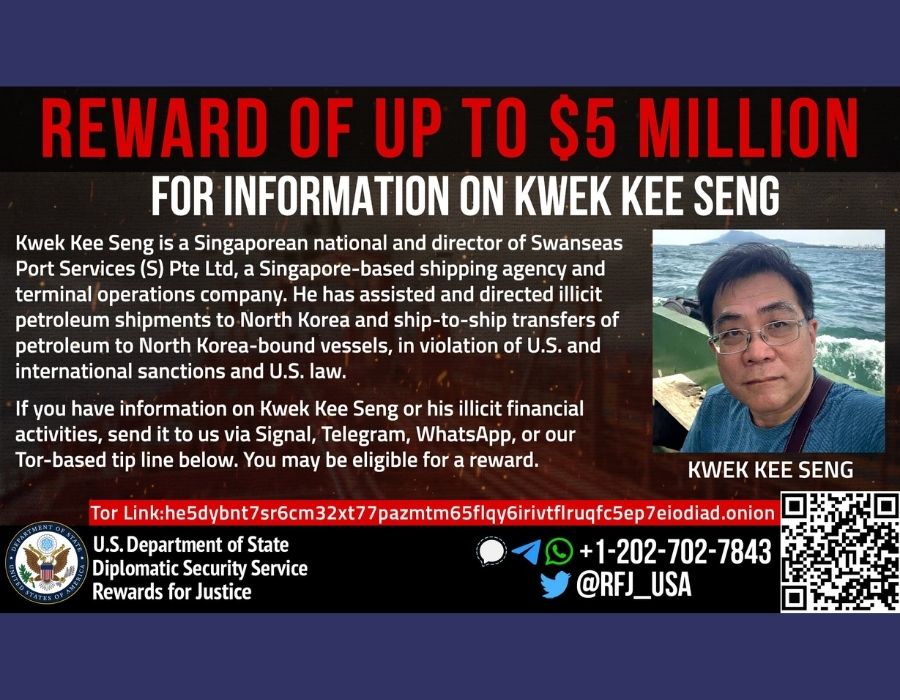 The U.S. Department of State’s Rewards for Justice (RFJ) program, which is administered by the Diplomatic Security Service, on Thursday (3 November) posted a notice, offering a reward of up to USD 5 million for information about Singaporean Kwek Kee Seng.

According to the notice, Kwek, director of the Singapore-based shipping agency and terminal operations company known as Swanseas Port Services (S) Pte Ltd, engaged in an extensive scheme to evade U.S. and U.N. sanctions by covertly transporting fuel to North Korea (Democratic People’s Republic of Korea, DPRK) in violation of U.S. law.

“Kwek Kee Seng has directed the delivery of petroleum products directly to the DPRK as well as ship-to-ship transfers of fuel destined for the DPRK using one of Kwek’s oil tankers, the M/T Courageous,” it said.

“Kwek and his co-conspirators sought to obscure their identities and activities by conducting financial transactions through a series of shell companies. He directed payments in U.S. dollars that were routed from his shell companies based in Panama, Singapore, and elsewhere, and through U.S. banks to pay for oil, the M/T Courageous, services and materials for the vessel, and salaries for crewmembers.  These transactions violated the prohibition of the export of financial services for the benefit of the DPRK.”

On April 23, 2021, a U.S. federal arrest warrant was issued for Kwek in the United States District Court, Southern District of New York, after he was charged with Conspiracy to Violate the International Emergency Economic Powers Act and Conspiracy to Commit International Money Laundering. He remains at large.

On October 7, 2022, the U.S. Department of the Treasury’s Office of Foreign Assets Control designated Kwek and Swanseas Port Services Pte. Ltd. pursuant to E.O. 13810 for activities related to the exportation of petroleum to the DPRK, which directly supports the development of DPRK weapons programs and its military.

In order to support international efforts to disrupt North Korea’s illicit activities, the State Department’s Rewards for Justice (RFJ) program offers rewards of up to USD 5 million for information that leads to the disruption of financial mechanisms of persons engaged in certain activities that support North Korea, including money laundering, exportation of luxury goods to North Korea, specified cyber-activity and actions that support WMD proliferation.

Note: Anyone with information about Kwek Kee Seng can submit a tip here.