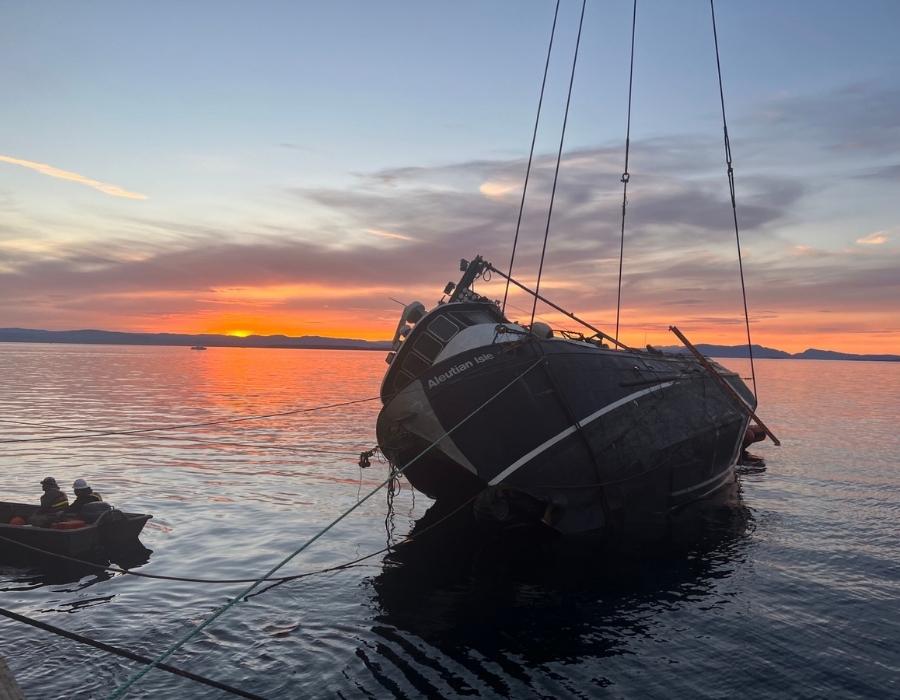 The Aleutian Isle, the fishing vessel involved in a bunker spill incident, was successfully lifted to the surface on 17 September, according to the US Coast Guard on Sunday (18 September).

After Aleutian Isle sank on 13 August in the vicinity of Sunset Point, a sheen was observed spanning more than two miles and was reported to have entered Canadian waters.

After surfacing the ship, crews began the complicated task of dewatering and debunkering fuel. Crews partially dewatered the vessel and removed approximately 775 gallons of oily-water mixture where it currently rests floating with assistance from the barge DB-24.

However, crews were unable to safely access all spaces and completely dewater the vessel. Consequently, the vessel’s weight exceeded the safe workload for the existing recovery plan. The unified command is reevaluating the best path forward, said the US Coast Guard in a statement. 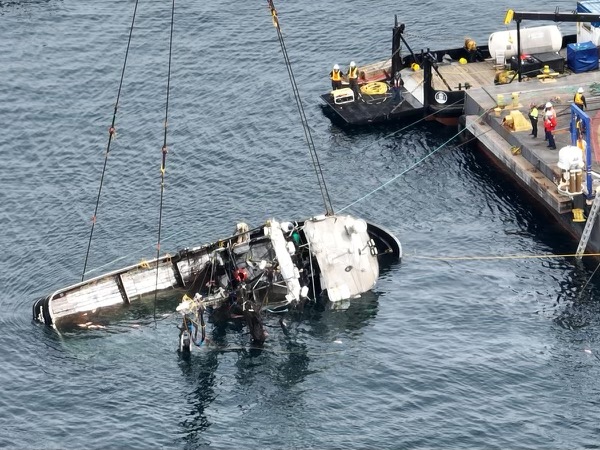 “Raising the vessel to the surface is certainly a success, but the complexity of this operation continues to challenge our team,” said U.S. Coast Guard Cmdr. Kira Moody, incident command.

“Lifting the boat was a critical first step to minimise the ongoing pollution risk. The next step will likely involve relocating the crane barge to a more sheltered location where we can fully secure the boat with far less risk to our divers and crew and better protect the environment from any lingering pollution risk.”

Continuing to lift the vessel in its current position would jeopardise the safety of crews who need access to the starboard side fuel tanks and internal spaces to continue dewatering and remove fuel to lessen the vessel’s weight, he added.

According to the US Coast Guard, the onsite crane can lift the current weight of the boat but the existing configuration of the rigging places too much stress on the vessel’s structure, which could cause it to break and likely release remaining fuel onboard. “Although the lifting operation is postponed, pollution mitigation strategies have been effective. As expected, sheening was visible while the vessel was lifted to the surface, and responders were able to boom sheening that was containable. Estimates to determine the amount of fuel released are still in-progress, but overflight observations keep it within expected amounts,” it said.

Recovery operations were estimated to resume in the next day or two. The unified command is reassessing the developing situation and re-evaluating the best options moving forward.

Air quality monitoring and protective booming will remain in place until recovery operations conclude. Over the course of the response, there have been no levels of concern despite the smell of fuel in some locations.

A safety zone of 1,000 yards remains in place around the operations.

One such creditor is owed around USD 670,000 and obtained a court ruling to seize GP APAC’s Singapore office which is worth eight times that, reports GT Review.

By designing ships' propellers and hulls differently, it can lead to lowered fuel consumption regardless of fuel type, says the Finland-based research group.