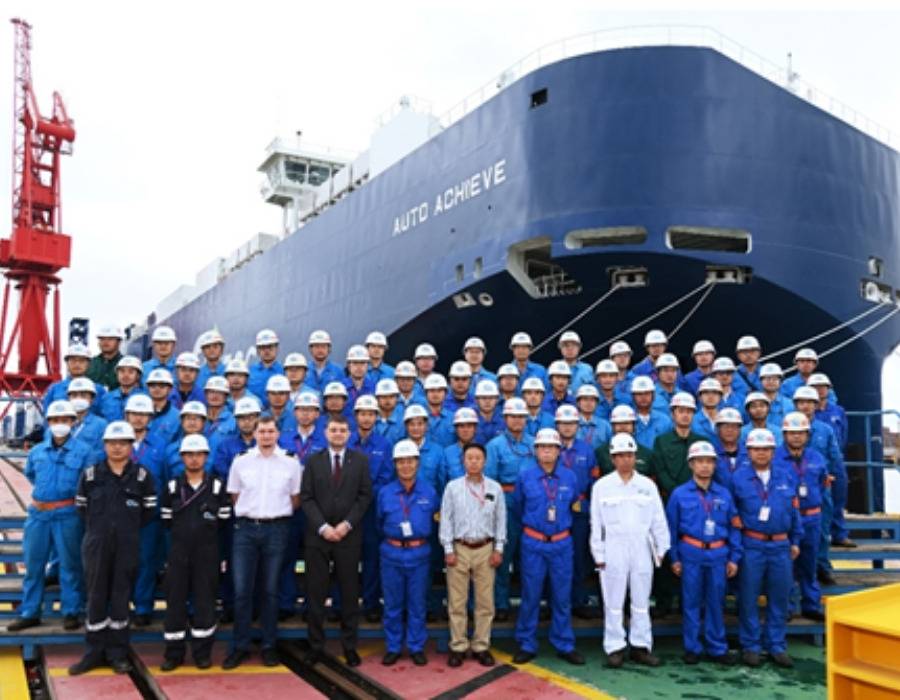 The latest PCTC, to be named Auto Achieve, will further contribute to reduced emissions for the environmentally focused ro-ro carrier in the European shortsea trade where it will join sister vessel Auto Advance that was delivered from the Chinese yard late last year.

“UECC has taken a progressive approach to curbing its environmental footprint with these newbuilds that are the first PCTCs to adopt this innovative technological solution, which is based on stringent design criteria for energy efficiency,” said Glenn Edvardsen, CEO of UECC.

The company will have a total of five eco-friendly vessels – over 50% of its owned fleet of nine PCTCs – when the third and final newbuild in the series is delivered later this year, with 80% of its total lifting capacity meeting or exceeding the IMO target to cut carbon intensity by 40% within 2030.

UECC earlier developed the pioneering dual-fuel LNG vessels Auto Eco and Auto Energy that have been meeting the IMO carbon-intensity target during six years of operation.

“No other shortsea or deepsea operator can demonstrate such a sustainable fleet. UECC has been a first-mover for green operations in the car carrier segment and is now benefiting from this proactive strategy by realising significant fuel efficiency gains and emission reductions,” Edvardsen says.

Multi-fuel engines enable a carbon dioxide emissions reduction of around 25%, SOx and particulate matter by 90% and NOx by 85% from the use of LNG and are also adaptable for low-carbon fuels such as bio-LNG and synthetic fuels as these become available.

The addition of hybrid technology marks another step up in sustainability as battery power can further reduce emissions through peak shaving, in addition to handling partial accommodation load and driving auxiliary equipment, while boosting operating efficiency.

The use of battery power is also beneficial for port calls as it eliminates particulate matter and other harmful emissions that represent a public health risk in coastal cities.

With the expected advent of the EU’s Emissions Trading System for shipping in 2024, UECC’s green fleet will prove a competitive advantage as more pollutive vessels will face higher costs in calling at European ports.

“Our investment in these newbuilds was based on our ethical belief in the need for decarbonisation of shipping to make a difference for the environment, given the industry’s high level of emissions relative to other sectors,” said Edvardsen.

“UECC’s decision has since been vindicated as increasing regulatory and market pressure for green operations have demonstrated the value of this future-oriented investment.”

The Panama Maritime Chamber supported event will look at the legislation and guidelines for the IMO 0.50% sulphur cap, how authorities are dealing with it, and more.