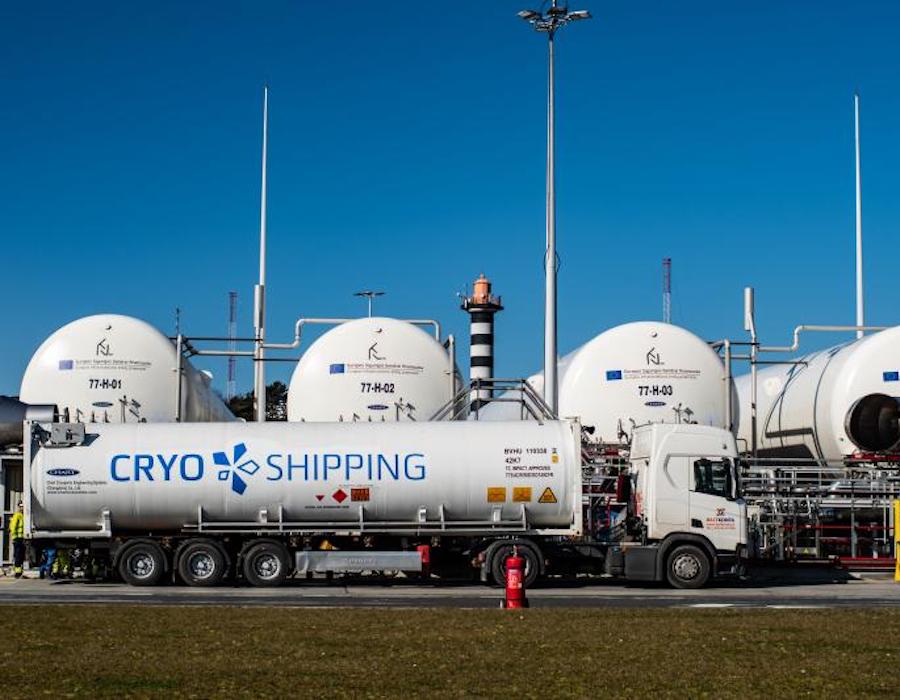 In this operation, MV Greenland, a cement tanker was bunkered with 45 cubic meters of LNG gas at Malku Bay Terminal.

The success of the event was credited to the cooperation of several stakeholders-  Klaipedos Nafta AB, Norwegian-based Cryo Shipping AS, Limkko group, Baltkonta UAB and Ignitis UAB.

In this case, a LNG filled ISO container was lifted onto a Baltkontos tow truck and transported to the Malku Bay terminal.

The first bunkering operation from the ISO container to the cement carrier in Klaipeda Port was carried out by Cryo Shipping AS, a company with experience in shipping and gas and oil, offering safe, customer-oriented and customer-friendly bunkering solutions.

The bunkering operation was conducted in accordance with all good practice requirements and recommendations of the European Maritime Safety Agency.

Following the bunkering of the ship, the ISO container of LNG gas purchased by Cryo Shipping from UAB Ignitis was refilled at a CNG onshore LNG distribution station.

Nicholai H. Olsen, Director of Cryo Shipping AS, pointed out that Klaipeda was chosen for the cement tanker bunkering because of the port’s CNG-LNG distribution station infrastructure.

“We are very grateful for all the help we have received from all the countries involved in this operation. We hope that Klaipeda will become an important LNG bunkering port in the future and Cryo Shipping will support and encourage this goal,” said Olsen.

The head of Cryo Shipping AS said that in future, the company has plans to acquire an LNG bunkering vessel, which would also be bunkering in Klaipeda port.

Darius Šilenskis, Director General of KN, pointed out that the whole process was complicated by the fact that there is no legislation regulating LNG bunkering in Lithuania today.

“The first document regulating LNG bunkering in the port will be the Port Shipping Rules, which are being revised by the entire LNG bunkering community,” said Šilenskis.

“While these were not available, Cryo Shipping AS had to go a long way in obtaining permission for the first LNG bunkering operation in the port of Klaipeda to negotiate a series of documents defining a safe operation and securing the permission of the Harbor Master’s Office in this particular case at Klaipeda Port,” he concluded.

Kęstutis Kairys, Head of Baltkonta UAB, notes that the first bunkering operation in Klaipeda is very good news for market participants and a major step forward in the field of LNG.

“I remember that two years ago we were just considering bunkering a ship from a tank truck. Today, this opportunity has become a reality and I have no doubt that this message will reach many shipowners who will discover Klaipeda as an LNG bunkering port, ”says Kairys.

The LNG bunkering operation that took place in Klaipeda Port this weekend may be the first. But Silensky says the number of LNG-bunkering procedures will increase as the number of LNG-powered ships and the growing number of their orders in the Baltic and North Seas escalates.

According to consulting and classification company DNV GL, there are 177 LNG-powered vessels worldwide and by 2027, another 208 marine vehicles using this fuel will be built. The highest concentration of such vessels is currently recorded in the North and Baltic Seas.

“The emergence of new LNG transport and bunkering vessels increases the competitiveness and availability of the region’s LNG market and facilitates more efficient use of the LNG infrastructure created in Klaipeda,” says D. Šilenskis.

LNG-powered vessels coming to Klaipeda port can be bunkered through three procedures at various port loading terminals from LNG tanker to ship, from terminal to ship in a custom CNG operated LNG distribution station and from ship to ship.

Although Klaipeda currently has no permanent resident LNG bunkering vessel, in the Baltic and North Sea region, LNG transportation and bunkering services are provided by a number of available vessels.

The new LNG-hybrid tug is the first of 12 tugs that Sembcorp Marine plans to design and build to replace the existing diesel-powered ones between now and 2025.