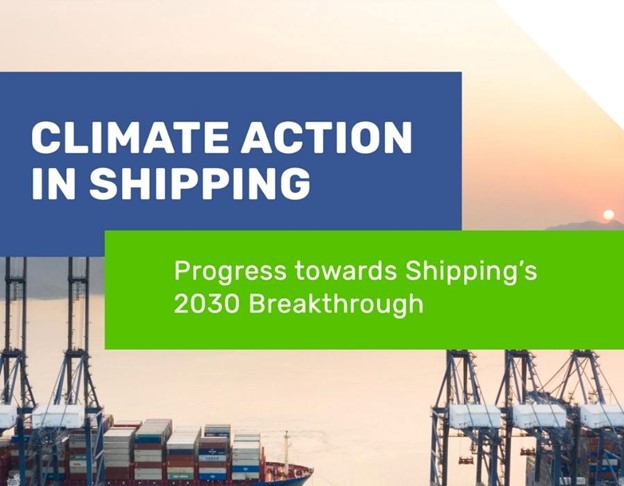 The first-of-its-kind Climate Action in Shipping Report – Progress towards Shipping’s 2030 Breakthrough report was launched on Wednesday (21 September), marking a significant milestone on the road to COP27 and provides an honest stocktake of progress to date, highlighting where coordinated effort and collaboration is needed.

The report finds there has been “significant progress from industry, national governments and positive developments at the IMO”, but converting those commitments into concrete developments is vital for further progress.

The Getting to Zero Coalition – an industry led Coalition of more than 200 members from across the maritime value chain in partnership with the World Economic Forum and the Global Maritime Forum – has contributed to the effort by validating progress against the five levers of the action plan and held a Workshop in Copenhagen in June with Coalition members providing significant input from the industry to the way forward achieving actions.

In terms of progress on technology and supply of SZEF (Scalable Zero Emission Fuels), the report found that shipping is only “partially on track.” While there are more than 200 shipping decarbonisation pilot and demonstration projects in the pipeline and progress has been observed regarding bunkering and safety guidelines internationally, moving from pilots to SZEF production commitments, investments, and infrastructure development is now a key requirement.

Based on UMAS analysis, it is expected that the industry will have to commit to investing around USD 40 billion annually by 2030 for SZEF bunkering and production, and the report points to the need for greater clarity on funding commitments for SZEF production infrastructure.

It adds that current orders for SZEF-ready ships should increase further, whilst a genuine zero carbon freight market is expected to emerge.

On policy, the authors said that it is vital that positive policy signals, such as consensus on pricing GHG emissions, translate into firm agreements at the IMO in 2023, with the coming year offering an important window of opportunity before the revision of the IMO’s Greenhouse Gas Strategy.

Katharine Palmer, Shipping Lead at the UN High level Climate Champions team said: “To achieve the 2030 Breakthrough goal we need near-term project level action describing tangible, collective action required. This report acts as an honest stocktake of progress which needs to continue to be monitored and tracked. In the run-up to COP27, this is an important milestone to signal a true shift to delivery to convert these commitments and pledges to actions and solutions”

Domagoj Baresic, Consultant at UMAS said: “In order for the shipping industry to decarbonise, multiple actions which can increase production and adoption of scalable zero emission fuels in the industry are required now. This report provides evidence for the significant progress which has been made to decarbonise shipping, yet at the same time shows that further significant action is required. The evidence presented shows now is the time to take the necessary actions to ensure that by 2030 the industry is committed to a decarbonisation trajectory.”

The UMAS and UN High level Climate Champions report, supported by the Getting to Zero Coalition, Lloyd’s Register and the Mission Possible Partnership, follows the October 2021 publication of an action plan by UN Climate Change High Level Champions, UMAS and the Global Maritime Forum setting out the specific near-term actions and milestones around which businesses and governments can unite based on the 2030 Breakthroughs from the High-Level Climate Champions.

Note: The full report of ‘Climate Action in Shipping Report – Progress towards Shipping’s 2030 Breakthrough’ can be found here.

The premium of LSMGO over VLSFO in Singapore has averaged $6.58/t so far this month, down from as high as $55/t in July this year, reports Argus Media.

E Hongda, the Vice Chairman, General Manager and Deputy Secretary of Chimbusco, visited customers in Fujian to carry out research on 15 February.

HSBC and UOB increases total lending from $225 million to $285 million in preparation for IMO 2020 credit.