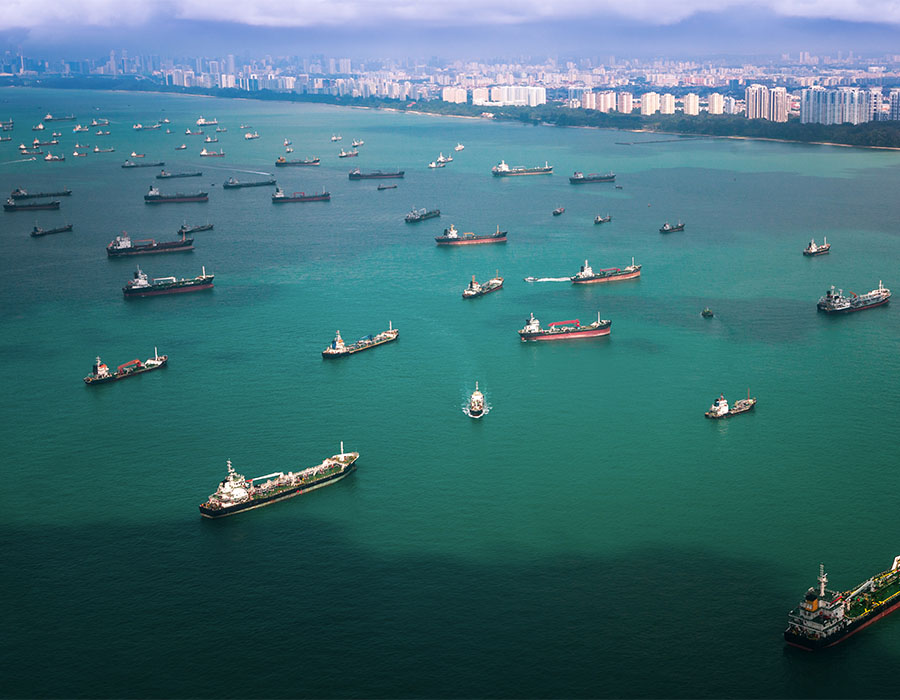 It highlights some of the central questions that need to be answered before ammonia-fuelled ships enter the shipping market, including the supply, sustainability, engine technology and the necessary safety considerations.

Supply: Shipping will have to compete with other industries

Today, around 80 per cent of the global ammonia supply is used as fertilizer. Where will the ammonia for shipping come from? This is an issue that remains to be resolved, and production would have to ramp up significantly to meet the future demands of both shipping and global agriculture.

“In the context of decarbonization it’s important to understand that when we talk about ammonia’s great potential for shipping, we mean green ammonia. The fuel’s sustainability credentials vary depending on how it is sourced,” explains Hendrik Brinks, Principal Researcher for Zero Carbon Fuels at DNV.

The crux is: green ammonia is currently not produced anywhere. This is expected to change over the coming decade. “Several fuel suppliers are already doing a lot of work on the necessary framework for producing green ammonia, including certification, technology and costs,” says Brinks.

While the supply of green ammonia will take time, the development of engine technology is progressing fast. In the AEngine joint development project (JDP), MAN Energy Solutions, Eltronic FuelTech, the Technical University of Denmark and DNV are working together on developing the first dual-fuel ammonia-powered combustion engines. The AEngine project is funded by the Innovation Fund Denmark. With combustion testing scheduled for this spring, MAN’s two-stroke model is expected to go to market in 2024.

“As an engine designer we are agnostic when it comes to the different fuel types,” says Peter H. Kirkeby, Principal Specialist, Dual-Fuel Engines at MAN Energy Solutions. “Ammonia has generated a lot of interest, especially from the deep-sea ship segments, and it has a lot of potential – but developing an engine that is powered by ammonia has been a challenge. One of the biggest hurdles is how to burn ammonia efficiently to extract the maximum amount of power while making sure the engine is still a compact design.”

Unlike diesel oil, ammonia has a very slow flame propagation, which means it burns much more slowly. Its autoignition temperature is also a lot higher, at around 630°C – diesel oil burns at 210°C. This means that sustaining combustion once it gets started is also more difficult with ammonia than with other fuels.

“And, of course, you also need to ensure that the engine allows for the usual performance peaks that come with acceleration, etc. We are planning for a final fuel mix that would contain around 95 per cent ammonia and 5 per cent of a pilot fuel such as marine gas oil. In the future this could even be biofuel,” says Kirkeby.

Harmful emissions could be mitigated by combustion process

Mitigating harmful emissions is another significant challenge, even with green ammonia. While carbon-free, ammonia contains a lot of nitrogen, and burning it is likely to result in both nitrogen oxide (NOX) and nitrous oxide emissions. Kirkeby explains that NOX emissions weren’t so much of an issue for the engine manufacturer. “They are well-regulated and the abatement technology for NOX – selective catalytic reaction – is already used on many ships and should also be suitable for ammonia. Nitrous oxide emissions are the greater challenge. N2O, or laughing gas, is a very aggressive greenhouse gas that is 283 times stronger than CO2. Our approach is to use the combustion process itself to mitigate these emissions.”

This is how it could be done: burning ammonia generates nitrous oxide emissions inside a certain pressure and temperature window during the combustion process. “Through combustion tuning, we can either stay clear of that window or we can go into the temperature and pressure range where it’s decomposed again. In the diesel cycle, which is the one we use, you have very good control over this,” says Kirkeby.

The final challenge has been to adapt the well-established two-stroke engine system to ammonia without changing the fundamentally good things about it. “We have to make it a very simple system that can also handle ammonia – meaning that it is modular enough to allow for easy troubleshooting and for crews to have straightforward maintenance procedures even though the fuel is a toxic substance.”

Looking ahead, the first engines will likely be installed on ammonia tankers. Currently there are about 200 gas tankers that can take ammonia as cargo and typically 40 of them are deployed with ammonia cargo at any point in time. These kinds of vessels could be ideal candidates as they already have the fuel as cargo and crews with experience in handling ammonia. Other segments such as bulk carriers and containerships could follow suit. DNV expects the first ammonia-fuelled vessels to hit the water in the second half of this decade, but large-scale uptake of this technology is not expected until the early 2030s.

The safety of ammonia systems and operational procedures is at the top of the agenda in DNV’s work on this fuel. In the AEngine joint development project, DNV is handling the safety aspects and will be performing risk assessments with regard to hazard identification (HAZID), hazard and operability (HAZOP) and failure mode and effect analysis (FMEA).

DNV class rules for ammonia as ship fuel were published in July 2021, paving the way for technology development. They include provisions for storing, handling and bunkering ammonia on board. Some of the aspects to consider here include the use of toxicity zones and venting masts in specific locations.

The engine technology itself would be fitted with double wall piping, so that the pipe containing ammonia is surrounded by a ventilated space, making it easy to detect leaks. “This is a common standard for all alternative fuels,” explains Christos Chryssakis, Business Development Manager and Alternative Fuels Expert at DNV. Additional solutions such as double block and bleed valves ensure that systems can be separated for maintenance.

“Our class rules for ammonia are based on experience with ammonia as a refrigerant and as cargo. We are constantly updating these rules, as ongoing research offers further insights into the necessary margins to ensure that systems are not only safe but also practical in their handling,” says Chryssakis. “Carrying out risk assessments on the first designs for ammonia-fuelled vessels will be an important next step.”

Looking beyond operations on board ammonia-fuelled vessels, DNV recently completed studies on ammonia bunkering operations in the Ports of Amsterdam and Oslo, examining the potential ramifications of a large ammonia leak in ports. “We looked at worst-case scenarios, including the implications of leaks in the port-side supply infrastructure and on a bunker vessel. The Port of Oslo lies in a residential area – so the stakes are particularly high here,” explains Chryssakis.

“We defined external safety zones and risk-reduction measures, looking at the radius which would be affected by an ammonia leak. For the Port of Oslo, we found that in principle using a bunkering vessel with refrigerated ammonia would come with an acceptable risk level, because the residential area in Oslo would not be affected by a leak. But there is still work to be done to ensure safe handling on board.”

The Global Centre for Maritime Decarbonisation (GCMD) in Singapore also just recently initiated a study that aims to define a robust set of safety guidelines and operational envelopes that will establish the basis of a regulatory sandbox for ammonia bunkering trials at two local sites. DNV will take the lead in that safety study and supports with ammonia demand forecasting, bunkering site recommendations, the development of conceptual designs of bunkering modes like truck to ship or ship to ship, HAZID/HAZOP/QRA studies, as well as drafting of technical and operational guidelines.

“There are many parts to this puzzle and it’s essential that we have them all in place for ammonia to safely enter the marine fuel market,” says Hendrik Brinks. “We will need rigorous safety procedures, the inclusion of ammonia in international regulations as well as engine designs that control harmful emissions and allow for straightforward maintenance protocols. And of course, highly skilled crews that are trained to handle ammonia and green ammonia in sufficient supply. Only then can ammonia reach its full potential as one of the most promising green fuels.”

Decarbonising shipping: We must find new ways to resolve the split incentive

Sector needs to work together on preventing split incentives from being the silent killer of innovation for decarbonisation, writes Founder & CEO of Silverstream Technologies.

‘Our early conversations with potential customers are so far very positive,’ says Head of Industrial Bulk.