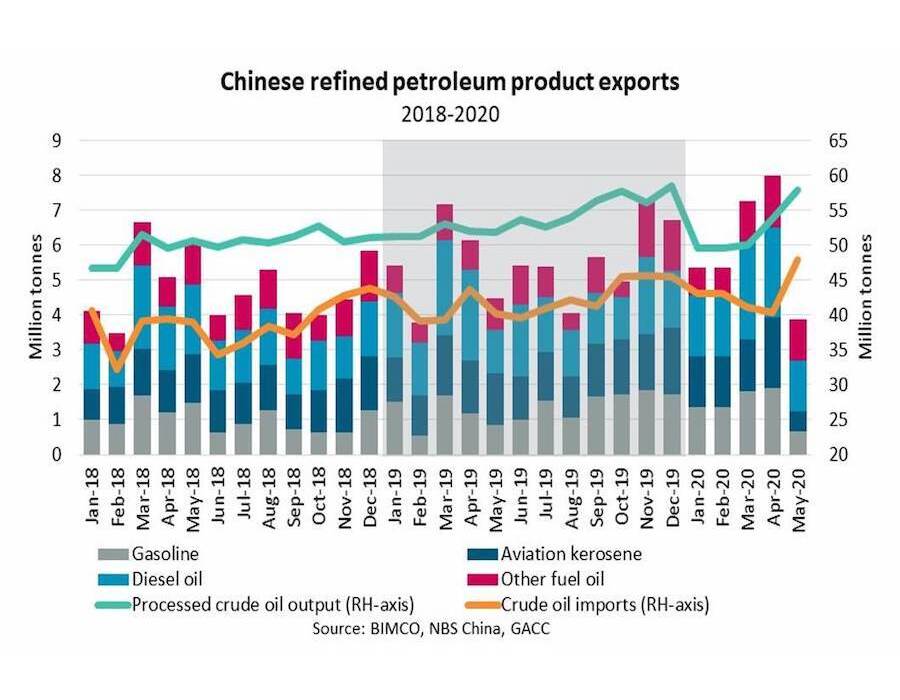 BIMCO, on Friday (26 June) published an update on the factors behind the fall in Chinese petroleum product exports given the extraordinary market conditions in Q1 2020 due to the COVID-19 pandemic, and possible outcomes that could affect China’s output of refined petroleum products including low sulphur bunker fuel.

The sharpest decline was seen in exports of aviation kerosene, also known as jet fuel, which dropped by 1.4m tonnes from 1.9m tonnes in April to 0.6m tonnes in May, a 72% decline. Exports of gasoline and diesel oil also dropped significantly by 64% and 44% respectively.

The oil market has endured volatility on an unprecedented scale in 2020, driven by simultaneous supply and demand shocks. The US Energy Information Administration (EIA) estimates that oil demand in May dropped by 17 million barrels per day compared to 2019, which partly explains the drop in Chinese refined petroleum exports during that month.

Under ordinary circumstances, oil product tankers would feel the pain when Chinese petroleum product exports exhibit such a massive monthly drop. Yet, almost nothing in the oil tanker market in 2020 has followed along the usual market patterns.

The low oil prices had the oil tanker market working overtime, and the pickup in demand for floating storage caused a spike in earnings for crude oil tankers and product tankers.

However, with OPEC+ production cuts in motion since 1 May 2020, and oil prices gradually recovering, the profitability of the oil product tanker market has started to face mounting downward pressure.

With a massive oil supply-demand imbalance in April and May, oil prices suffered. Chinese oil importers seemingly capitalized on the low prices which led to record-high crude oil imports of 47.9m tonnes in May, a 19% month-on-month increase. Unsurprisingly, crude oil processing at Chinese refineries followed along the same trajectory and jumped to 57.9 m tonnes in May, the highest level in the first five months of 2020 and second-highest level on record.

The high crude oil processing in May can partly be attributed to the cheap oil in recent months but is also reflective of economic conditions in China which have started to shore up. Whether the high output in May will translate into a proportional increase in refined petroleum products in June remains to be seen in the upcoming export data. However, anecdotal evidence suggests that one of the large Chinese oil majors has sought to limit seaborne exports of oil products in June.

Singapore: Tripartite Partners Call upon Ships to Sound their Horns on Labour Day

MPA, SMOU, SOS, and SSA are calling upon ships in the Port of Singapore to sound their horns for 15 seconds at 12 noon (Singapore local time) on Labour Day.

Highlights ‘firm foundation for growth’ with GBP 4.5 million funding in place, as company announces promotions of key staff members instrumental in the development of MSAR trials during 2019.