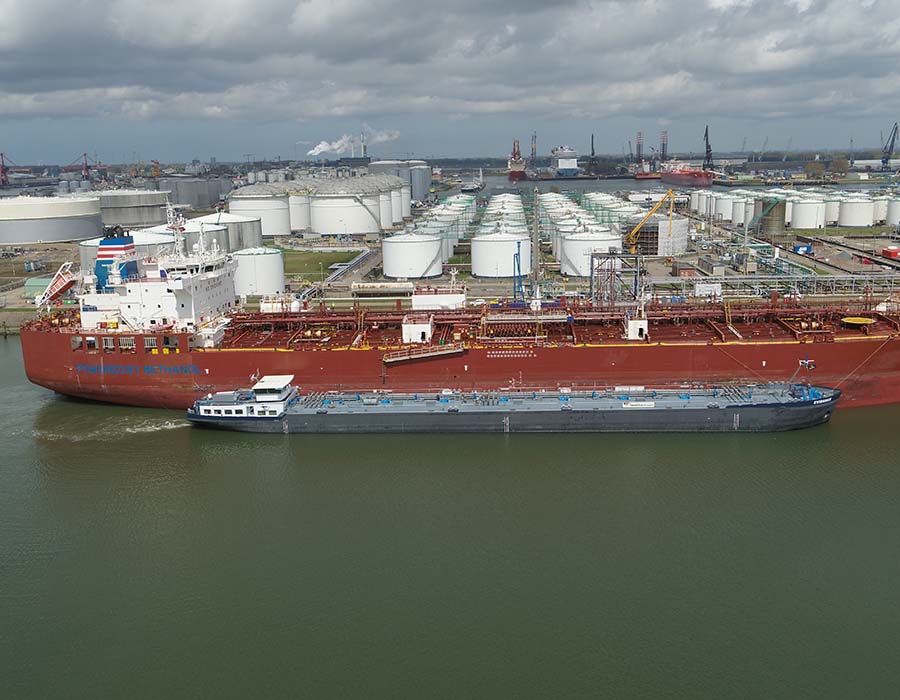 Waterfront Shipping, a wholly-owned subsidiary of Methanex Corporation (Methanex), on Monday (10 May) demonstrated the ease of ‘barge-to-ship’ bunkering as part of the launch of the world’s first barge-to-ship methanol bunkering operation at the Port of Rotterdam.

Waterfront Shipping’s Takaroa Sun—a long-term chartered vessel owned by NYK Bulkship (Asia) Pte. Ltd., and a subsidiary of NYK—which was accorded special mention for Green Ship of the Year, participated in the operation as the inaugural methanol-powered ship to be fuelled by a commercial bunker barge.

The premiere bunkering operation took place at the Vopak Terminal Botlek of Royal Vopak with a bunker barge, “MTS Evidence,” operated by TankMatch. The Port of Rotterdam is the largest seaport in Europe with approximately 30,000 visiting seagoing vessels and 100,000 inland vessels per year.

“When appropriate safety measures are followed, we know that methanol is safe to ship, store, handle and bunker using procedures similar to conventional fuels. Today’s methanol bunkering demonstration is another step in helping the shipping industry with its journey to reduce emissions.”

The bunkering demonstration provided further evidence of methanol as a low emission, safe and simple to handle clean fuel that offers a future-proof pathway to a low-carbon future.

“The Port of Rotterdam fully supports initiatives to reduce pollution and greenhouse gas emissions and promotes sustainability for ships calling here and in other ports,” said Allard Castelein, CEO Port of Rotterdam Authority. “Methanol has proven itself able to meet our very stringent safety standards and can play an important role in meeting the lower emission goals.”

“As shipowners begin to engage in the energy transition, the Vopak terminals have the capabilities and experience to also work with operators of methanol-fuelled vessels and meet their specific requirements,” said Dick Richelle, Commercial Director of Royal Vopak. “Methanol is globally available and has similar storage needs to conventional fuels. This demonstration proves that methanol bunkering is a safe and realistic option as a clean-burning fuel with a sustainable pathway.”

“We are increasingly hearing from vessel operators who want to understand their options for lowering their emissions and want a simple path to IMO compliance,” says Andre Nieman, Chief Executive Officer of TankMatch. “Bunkering with methanol requires a similar level of risk assessment and safety management as other conventional bunker fuels and we found this process simple to manage and execute.”

Methanex is committed to demonstrating ongoing leadership in the use of lower-emission methanol as a marine fuel.

Waterfront Shipping recently ordered an additional eight methanol-fuelled vessels to be delivered between 2021 and 2023—with this latest order, approximately 60% of its 30-ship fleet will be powered by lower emission, methanol dual-fuel technology.

Further information on the methanol bunkering demonstration will be made available to the marine industry in the coming months.

Agreement between trio aims to establish central links across West and East in key LNG-bunker ready ports that include Baltic and North Sea ECA and key Chinese ports.

Guidelines address the industry need for clarity on how to apply and interpret some of the statutory requirements for the filling and loading limits of LNG fuel tanks.