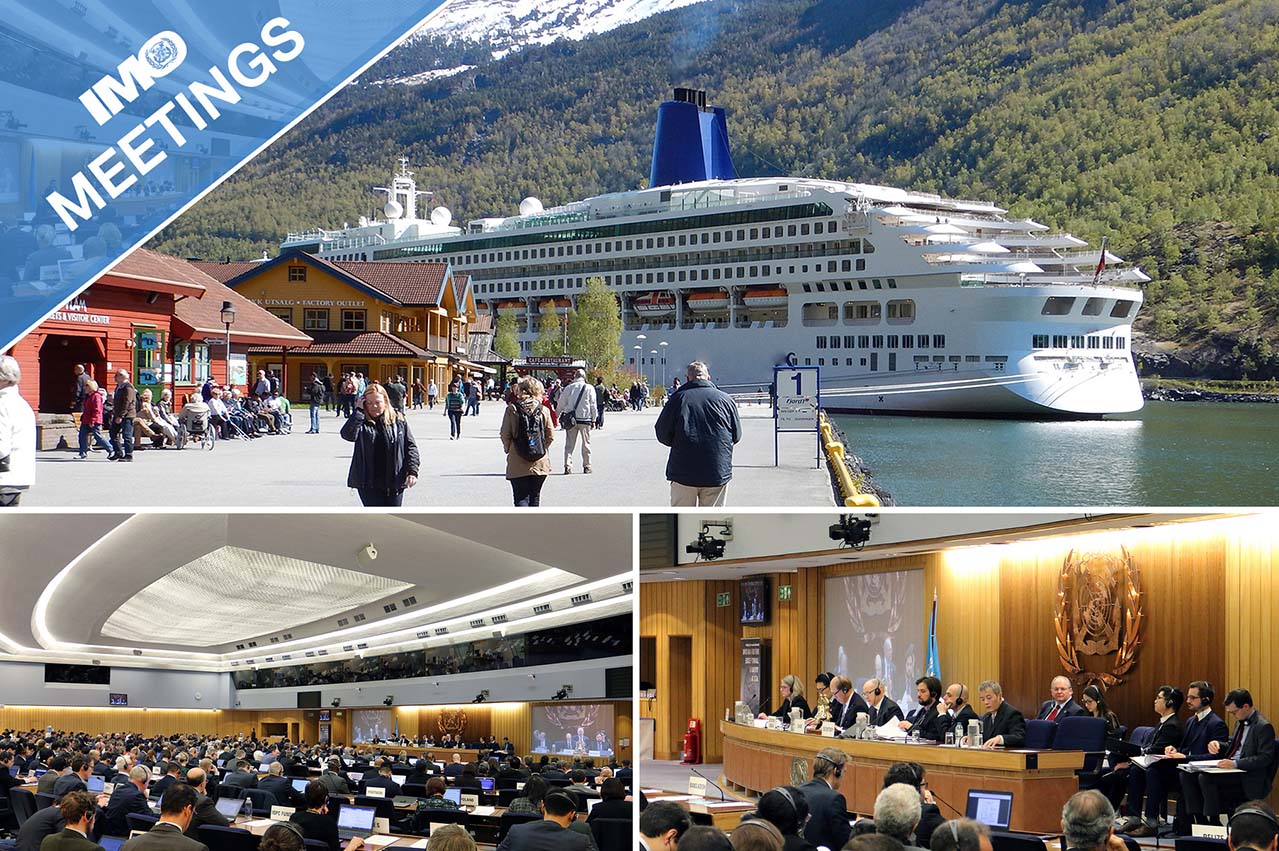 Delegates met to finalise draft Guidelines on consistent implementation of the 0.50% sulphur limit under MARPOL Annex VI, together with other relevant guidelines, forming a comprehensive package of new and updated instruments that will assist industry and Administrations to effectively and uniformly implement the 0.50% sulphur limit, said the IMO.

Details of the draft Guidelines and their respective adoption period are as follows (a meeting summary from the IMO website here):

Draft Guidelines on consistent implementation of the 0.50% sulphur limit

The draft Guidelines on consistent implementation of the 0.50% sulphur limit under MARPOL Annex VI Include sections on the impact on fuel and machinery systems resulting from new fuel blends or fuel types; verification issues and control mechanism and actions, including port State control and samples of fuel oil used on board; a standard reporting format for fuel oil non-availability (fuel oil non-availability report (FONAR); and possible safety implications relating to fuel oils meeting the 0.50% sulphur limit. MEPC 74 (May 2019) is expected to adopt these guidelines.

Draft circular on delivery of compliant fuel oil by suppliers

The Sub-Committee agreed draft amendments to MARPOL Annex VI, for approval by MEPC 74 and subsequent adoption by MEPC 75 (Spring 2020), with an expected entry force date of mid-2021.

Appendix I amendments to the International Air Pollution Prevention (IAPP) certificate – Draft consequential amendments to update the IAPP certificate to add a reference to sampling points and also to note where there is an exemption to the provision for low-flashpoint fuel.

Draft amendments to on board sampling guidance

The Sub-Committee agreed draft 2019 Guidelines for on board sampling for the verification of the sulphur content of the fuel oil used on board ships, updating the previous version. MEPC 74 (May 2019) is expected to approve these guidelines.

The Sub-Committee agreed, in principle, to draft 2019 Guidelines for port State control under MARPOL Annex VI, updating the 2009 guidelines. MEPC 74 (May 2019) is expected to adopt these guidelines.

MEPC 74 (May 2019) is expected to consider these draft interim guidelines further.

Review of the 2015 Guidelines on Exhaust Gas Cleaning Systems

In the meantime, the Sub-Committee agreed to forward a new draft Appendix 6 to the EGCS guidelines, developed by the correspondence group, to MEPC 74 (13-17 May) for review and finalization, with a view to potentially issuing it as an MEPC circular. The proposed draft Appendix 6 provides Guidance on temporary indication of ongoing compliance in the case of the failure of a single monitoring instrument, and recommended actions to take if the EGCS fails to meet the requirements of the Guidelines. It aims to address situations in which there is a malfunction of the EGCS system.

The Sub-Committee encouraged interested Member States and international organizations to undertake further scientific research and to submit results to future sessions to facilitate the work on the revision of the 2015 EGCS Guidelines.

The Sub-Committee requested the IMO Secretariat to explore the possibility of GESAMP carrying out a review of the relevant scientific literature and also overseeing a modelling study of the impacts of discharge washwater from exhaust gas cleaning systems. The Sub-Committee also invited Member States and organizations in consultative status to submit further scientific studies and information.

Controls on the biocide cybutryne in anti-fouling systems agreed

A second compound/active ingredient used in biocides in anti-fouling systems on ships is set to be prohibited under the IMO Convention for the Control of Harmful Anti-fouling Systems on Ships (AFS Convention). The AFS Convention currently has controls on only one active compound – it prohibits the use of biocides using organotin compounds (TBT). The Sub-Committee agreed that new controls on the biocide cybutryne, also known under its industry name Irgarol-1051, should be included in the AFS Convention.

The proposed amendments can be adopted by MEPC 75, and would enter into force under the tacit acceptance procedure, a minimum of 18 months after adoption (date to be decided by the MEPC).

The Sub-Committee invited proposals to PPR 7 on consequential amendments to the Guidelines for brief sampling, survey and certification, and inspection of anti-fouling systems on ships (resolutions MEPC.104(49), MEPC.195(61) and MEPC.208(62)). These should take into account issues raised by delegates during the meeting, including the fact that methods for brief sampling and analysis of anti-fouling systems are currently specific for organotin compounds and might not be suitable for cybutryne.

MEPC may also consider the need for revisions of the Revised guidance on best management practices for removal of anti-fouling coatings from ships, including TBT hull paints (LC-LP.1/Circ.31/Rev.1) and the Inventory of Hazardous Materials under the Hong Kong Convention, in light of the introduction of controls of cybutryne under the AFS Convention.

The Sub-Committee began its work to develop measures to reduce the risks of use and carriage of heavy fuel oil as fuel by ships in Arctic waters. A working definition for heavy fuel oil was noted, which says that “heavy fuel oil means fuel oils having a density at 15ºC higher than 900 kg/m3 or a kinematic viscosity at 50ºC higher than 180 mm2/s”.

A draft methodology for analysing impacts of a ban on heavy fuel oil for the use and carriage as fuel by ships in Arctic waters was agreed. The Sub-Committee invited submissions to PPR 7, especially those by Arctic States, containing impact assessments guided by but not limited to the methodology.

The methodology sets out five steps to assess the impact of a ban. Specific analyses that are detailed include: determination of the study area; assessment of the costs to Arctic indigenous and local communities and industries; assessment of the benefits of an HFO ban to Arctic indigenous and local communities and ecosystems; and consideration of other factors that could either ameliorate adverse impacts of a ban or accommodate specific situations.

Meanwhile, a correspondence group was instructed to develop guidelines on measures to reduce risks of use and carriage of heavy fuel oil as fuel by ships in Arctic waters. The guidance could include sections on navigational measures; ship operations; infrastructure (onshore and offshore) and communications; enhanced preparedness for emergencies of oil spills, early spill detection and response; drills and training; and economic assessment of potential measures.

Addressing the impact on the Arctic of Black Carbon emissions

The Sub-Committee identified a number of potential control measures to reduce the impact on the Arctic of Black Carbon emissions from international shipping.

A simplified compilation of the identified control measures was forwarded to MEPC 74.  The Committee was invited to provide instruction on further work on the reduction of the impact on the Arctic of Black Carbon emissions from international shipping

The Sub-Committee agreed the draft Guide on practical implementation of the pollution prevention and response treaties (OPRC Convention and the OPRC-HNS Protocol).

The Guide is intended to: promote understanding of the overall OPRC Convention and OPRC-HNS Protocol concept; explain the benefits of participation in this international regime; provide a step-wise approach for the planning, preparedness and implementation process at national and regional levels; and identify existing publications and support mechanisms to assist with implementation.

The International Convention on Oil Pollution Preparedness, Response and Co-operation (‘OPRC Convention’) was adopted in 1990 to define appropriate levels of planning and preparation for marine oil pollution. To broaden the scope of the OPRC Convention, the Protocol on Preparedness, Response and Co-operation to Pollution Incidents by Hazardous and Noxious Substances (OPRC-HNS Protocol) was adopted in 2000.

The treaties provide a framework designed to facilitate international co-operation and mutual assistance in preparing for and responding to major oil pollution incidents and require States to plan and prepare by developing national systems for pollution response in their respective countries, and by maintaining adequate capacity and resources to address oil pollution emergencies.

Revised guidelines for provisional assessment of liquid substances in bulk

The Sub-Committee agreed the draft revised MEPC circular on the Guidelines for the provisional assessment of liquid substances transported in bulk. The draft will be submitted to MEPC 74 for approval.

Dr Vis discusses challenges shipowners could face with 0.5pc sulphur fuel and tests they should be running.

Increase in barging cost and credit risk exposure to clients, forecasts CEO and Board Member of bunkering firm.