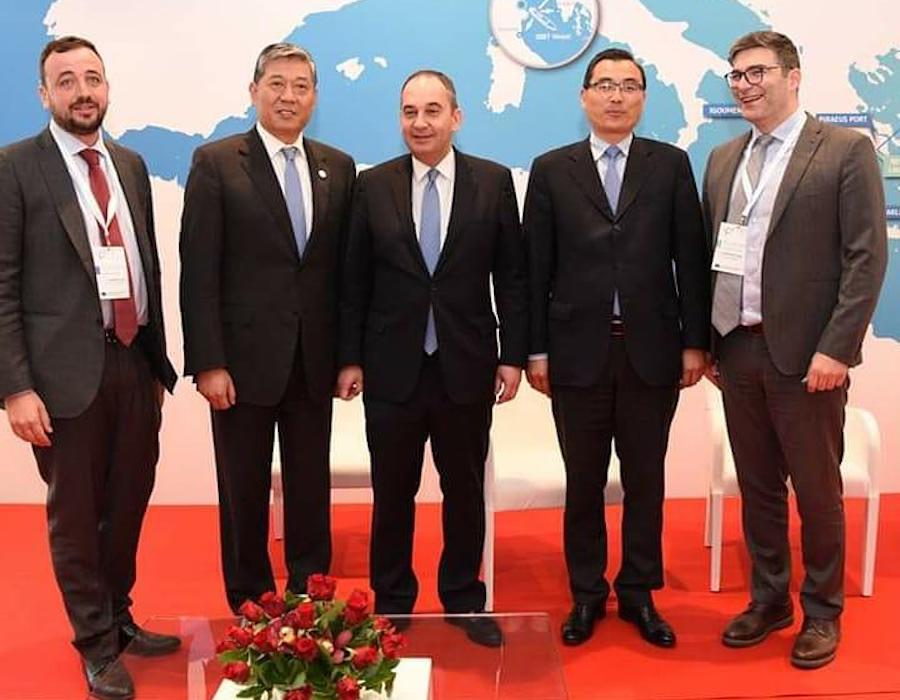 The main highlight of the conference was the potential use of liquefied natural gas (LNG) as fuel for maritime transports in Eastern Mediterranean sea.

The European co-financed Poseidon Med II’s role is to set the course for the creation of a viable and efficient LNG supply chain in the Eastern Mediterranean region, in line with the requirements of the International Maritime Organization (IMO) and the European Green Agreement aimed at limiting sulfur oxides emissions in fuel oil used on board ships from 2020 and the gradual de-carbonization of international shipping by 2050.

“Since the Piraeus Hub area represents the greatest port in the Mediterranean in short sea shipping volume with passenger vessels, car carriers, container liners and terminals, and shipyards we encourage and support actions aiming to reduce emissions,” said Yu Zeng Gang, Board of Directors Chairman at the Piraeus Port Authority S.A., at the conference opening.

“It is an ambitious and significant effort reflecting the industry preparation to meet the environmental targets set by international regulations.”

“The advantages of LNG are well in line with the challenges that global shipping has to face by applying the new rules for environmental protection,” said Ioannis Plakiotakis, Greek Minister of Maritime Affairs & Insular Policy in his welcome address.

In her keynote address, Maria Spyraki Member of European Parliament (MEP), highlighted the important role of gas to make the energy transition to clean energy sustainable, as it provides environmental benefits, security of supply and flexibility in the energy system.

At the same time, she pointed to the risk of existing investment in energy storage and transfer of natural gas to become stranded assets.

She therefore urged for the upgrade of existing infrastructure so it could immediately have the capacity to store and transfer hydrogen and natural gas from renewable sources.

“I would like to assure you that DEPA remains fully committed to the successful completion of Poseidon Med II, always keeping its eyes on the future. And we will continue at the same path, visioning and working for more clean, competitive and sustainable maritime transportation in the Eastern Mediterranean,” said Konstantinos Xifaras, Chief Executive Officer of Public Gas Corporation of Greece (DEPA).

“Key to this effort is the dynamic expansion of LNG as marine fuel, which is the most reliable and at the same time the most cost effective one, compared to conventional fuels.”

“DEPA is already preparing for the next day in shipping, building – as part of the Blue Hubs program, which is the evolution of PMII – a state-of-the-art LNG vessel, with total capacity 3,000 cubic meter, based in Piraeus, to refuel coastal and other vessels not only in the country’s largest port but in other ports as well,” he concludes.

Fernando Kalligas, Head of Chief Executive Office of the Hellenic Gas Transmission System Operator (DESFA) pointed out that it is important the key role of LNG in the sustainable shipping decarbonization with the 2020- 2030 decade being the most important one, stressing the urgency for early action to achieve an effective long-term response to climate change.

LNG pricing, the decarbonisation debate, the infrastructure bottlenecks and the shipowners’ perspectives to LNG as fuel pathways were at the core of the discussion of the first session between industry specialists.

Specific emphasis was given to competitiveness of LNG versus VLSFO, the challenge of LNG availability across routes, the methane slip performance for marine engines and incentives and supporting schemes for shipowners to switch to LNG-fuelled vessels.

“Current conditions signify strong prospects for the LNG as a marine fuel, while the deployment of LNG refueling infrastructure in major ports worldwide propel the LNG forward into the markets, at a moment that pricing levels appear to be significantly competitive”.

Panels also included the Spanish rich experience on LNG bunkering, the significant role of collaboration with local authorities, the training and awareness components for building a positive public perception towards the use of LNG were among the highlights of the session.

“The planned port infrastructure expansion to allow LNG bunkering operations, will secure more benefits for the shipping companies that will lead to more intelligent decision outputs,” he concluded.

The vessels are being built by Guangzhou Shipyard International and will be chartered by Total on long term time charters with fixed earnings upon delivery in 2023.