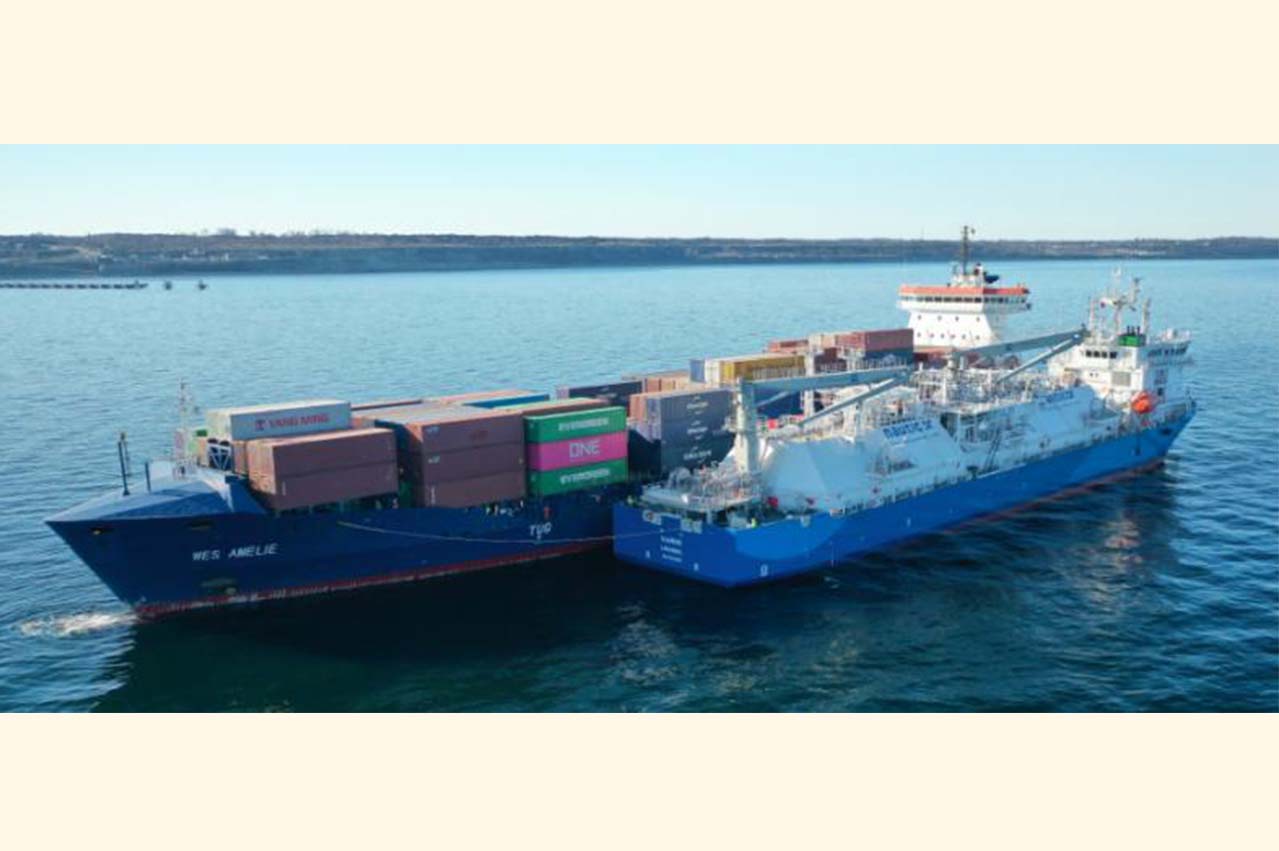 The operation took place in the anchorage area in front of Visby, Sweden.

The transfer of LNG between the two vessels marks an important step in several aspects, with Wes Amelie having received LNG for the first time from a bunker supply vessel and the Baltic Sea in general seeing the first ship-to-ship LNG bunker operation for a vessel of that kind.

“We are proud that in cooperation with Unifeeder and Wessels Reederei we have been able to provide a state-of-the-art ship-to-ship LNG fuelling solution for Wes Amelie,” stated Mahinde Abeynaike, CEO of Nauticor.

“The successful operation proves again that LNG is becoming a fuel for all segments in the shipping sector and that the availability of the molecules is secured in Northwest Europe.

“We are happy to support the efforts of those pioneers who are working on establishing LNG as fuel for containerships by providing highest quality standards and cost-efficient LNG supply solutions.”

The Wes Amelie, owned by Wessels Reederei based in Haren/Ems, was the first of its kind to run on the environmental-friendly fuel, when the vessel was retrofitted in 2017.

Running on a feeder route between Rotterdam and the Baltics, the vessel is operated by Unifeeder, which is providing the largest feeder and shortsea network in Europe.

“We are glad that the first LNG ship-to-ship transfer for the Wes Amelie went well, due to the smooth cooperation between the ship’s crew, the Nauticor experts and our bunker team here at Unifeeder,” said Hans Staal, Head of Bunker Procurement of Unifeeder.

“As one of the first movers in the use of LNG as fuel for container vessels, we have a substantial interest in developing a comprehensive LNG supply infrastructure.

“The development of ship-to-ship supply chains, such as the one offered by Nauticor with Kairos, is an important step towards a more efficient LNG distribution.”

The Managing Director of Wessels confirms the advantages of using LNG as fuel.

“The container feeder segment is predestined for the use of LNG as marine fuel and ship-to-ship LNG bunkering is an elementary component” said Christian Hoepfner.

“Wes Amelie has convincingly shown that the use of LNG substantially benefits the environment along the feeder routes and raises advantages for the operators. Therefore, we are working on a number of similar projects to rapidly expand the fleet of eco-friendly vessels converted to LNG.”

LNGPac-ILTCS has the process equipment mounted in front of the tanks, instead of the usual on top installation.

Port to consider investing in bunkering vessel or permanent LNG infrastructure in the future.