Domestic bunker fuel demand declined in June. With heavy rains in the southern coastal region, the coastal bulk shipping market was sluggish amid weak demand for coal and metal ore. More available freight capacity and less cargoes suggested thin demand. Depressed by a slack coastal transport market, bunker fuel demand declined. The demand for domestic-trade heavy bunker fuel was about 280,000 mt in the month, down by 20,000 mt or 6.67% from the previous month. The demand for light bunker fuel was 95,000 mt in June, down by 10,000 mt from May on slim demand as fishers made purchases mainly based on needs.

China’s bonded bunker fuel imports were 1,553,000 mt in May, a surge of 50.89% month on month and a rise of 10.85% year on year, GAC data showed. Domestic bonded oil distributors actively made purchases of bonded bunker fuel as prices fell to the lowest level in the middle and late April. Most imported fuel oil cargoes they purchased in April arrived in May, which lent support to the imports. 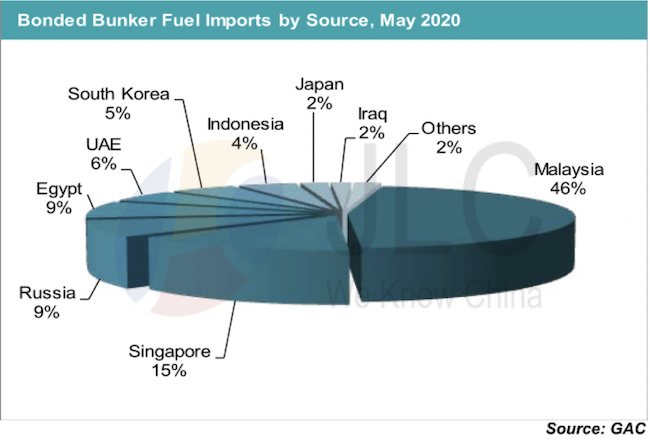 Chinese blended producers supplied a total of around 340,000 mt of heavy bunker fuel in June, a rise of 10,000 mt or 3.03% month on month, JLC data showed. Blended producers had firm selling interests on improving sentiment amid stronger international crude prices, leading to a small increase in supply. However, blended producers in Northeast China were forced to halt supply on a lack of fuel oil invoices when local tax administration tightened inspection. Therefore, domestic trade bunker fuel supply was still below the normal level of last year, despite a month-on-month rise. Light bunker fuel supply was about 100,000 mt, down by 10,000 mt from May. Despite a surge of international crude prices, light bunker fuel supply dropped at the off-peak season amid thin trades. Chemoil Mondex SAM, a company owned by FC Group based in Monaco will now operate under the name ‘Fratelli Cosulich Monaco SAM’.

Fuel comparison sheet provides insight into the costs for LNG as a marine fuel compared to existing bunker fuels to help companies account for future budgeting.