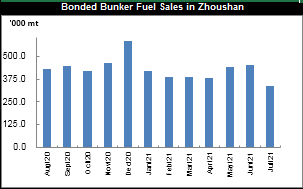 China’s bonded bunker fuel sales dropped slightly to 1.54 mln mt in July, JLC data showed. The local government at Zhoushan prohibited the bonded bunkering operation at night amid the big events of CPC, which directly drove down the bunkering sales. The bunkering volume at some ports was limited by typhoon and heavy rain in late July. What’s more, the resurgence of Covid-19 cases at some regions resulted in stricter control measures. Chimbusco and Sinopec sold about 630,000 mt and 650,000 mt of bonded bunker fuel, respectively. Bonded bunker fuel sales were about 80,000 mt for SinoBunker and 20,000 mt for China ChangJiang Bunker (Sinopec). New enterprises in the China (Zhejiang) Pilot Free Trade Zone sold 158,000 mt.

China’s bonded bunker fuel exports in June 2021 were 1.76 million mt, up by 7.97% month on month, according to GAC data. The bunkering demand at southern ports declined amid the resurgence of Covid-19 and the supply from refiners was stable. China exported 1.66 million mt of heavy bunker fuel and 101,000 mt of light bunker fuel in June. 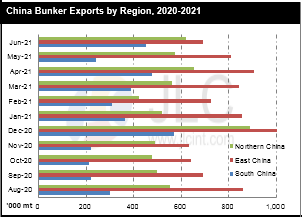 Domestic bunker fuel demand inched down in July. The demand from the bulk market and the shipping sector was low due to the influence of the centenary celebration of the CPC and typhoon despite the support of increasing international crude prices. End users’ consumption of domestic-trade heavy bunker fuel was about 350,000 mt in the month, down by 20,000 mt from the previous month. The typhoon in East China as well as resurgence of Covid-19 cases had a negative influence on the shipping market. The demand for light bunker fuel was 120,000 mt in July, down by 10,000 mt from the previous month.

China’s bonded bunker fuel imports slumped in June. For one thing, domestic LSFO output rose significantly, given the better profits. For another, the import resources had no price advantage.

Specifically, the largest import source for China was still Malaysia with 466,600 mt of bunker fuel. Imports from Singapore and South Korea were 99,800 mt and 51,600 mt respectively. 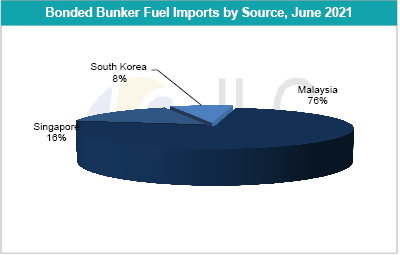 Chinese blending producers supplied a total of around 360,000 mt of heavy bunker fuel in July, down by 10,000 mt or 2.7% from June, JLC data showed. Low-sulfur residue oil in North and East China reduced in July due to the transportation restrictions during the centenary celebration of the CPC. Shale oil supply was stable. Light coal tar and coal-based diesel prices remained high under the strong demand in deep-processing field. Heavy bunker fuel supply inched down amid the high feedstock prices and waned purchase interest of blenders. Domestic light oil supply was about 140,000 mt in July, down by 10,000 mt from the previous month. 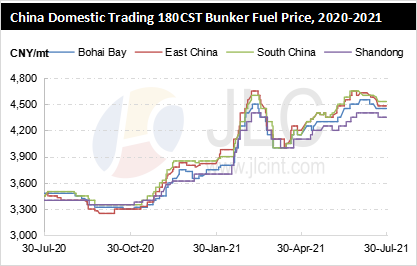 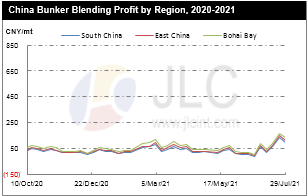 Argus Media: Bunker demand to fall by 8% in 2Q- IEA

IEA forecasts demand from all vessel types will drop by 5% this year, with 6% and 3% year-on-year falls in the third and fourth quarters.

Attending creditors may send any questions or other substantial and relevant matters they wish to raise at the meeting by way of email by 19 May.