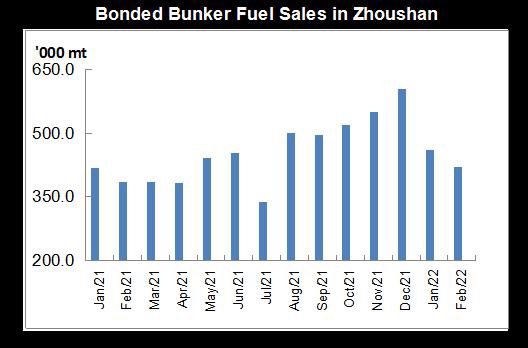 China’s bonded bunker fuel sales tumbled in February amid weakened shipping demand around the Winter Olympics and the Spring Festival. Moreover, the spiking prices of the bonded bunker fuel driven by geopolitical crisis also discouraged the downstream buyers, leading them to refuel only on rigid demand.

(There is no update on import and export data for January yet, as the General Administration of Customs of the PRC is expected to combine January and February data instead of providing data for a single month. The combined data for January-February are expected to be released in late March, and we will update the import and export data in the March version report that will be provided in early April.) Domestic bunker fuel demand continued to fall in February on the unattractive prices led by the crude market.

Also, the replenishment of most buyers has come to an end early in the month, and refiners were mostly delivering the previous-signed contracts as they were on leave for the Spring Festival. Therefore, market trading was thin with a restrained amount of new orders.The demand for domestic-trade heavy bunker fuel was about 320,000 mt in February, down 10,000 mt or 3.03% month on month. The demand for light bunker fuel was 130,000 mt in month, flat with the last month.

(There is no update on bunker fuel oil import data for January yet, as the General Administration of Customs of the PRC is expected to combine January and February data instead of providing data for a single month. We will update this part in the March version report that will be provided in early April.) Chinese blending producers supplied a total of around 320,000 mt of heavy bunker fuel in February 2022, a drop of 20,000 mt or 5.88% from last month, JLC’s data showed. In north China, refiners kept low operating rates during the Beijing Winter Olympics. The high prices of blended oil, spurred by the crude market, also limited blenders’ interest. Refiners in east China supplied only a small amount of bunker fuel in the month, and that in South China still had to conduct cross-region blendstock purchase. Also, affected by environmental inspections, the prices of light coal tar surged amid short supply, resulting in a low blended volume. Besides, the shrinking demand around the Spring Festival lowered the supply. However, light oil supply edged up on considerable coking margins and high oil product prices, along with a larger deep-processing demand for low sulfur residual oil. Domestic light oil supply was about 140,000 mt in February, up by 10,000 mt from the previous month, JLC’s data shows. Barge will be multi product capable and have multiple and segregated pumping, piping, and product heating redundancies for more efficient bunkering operations.