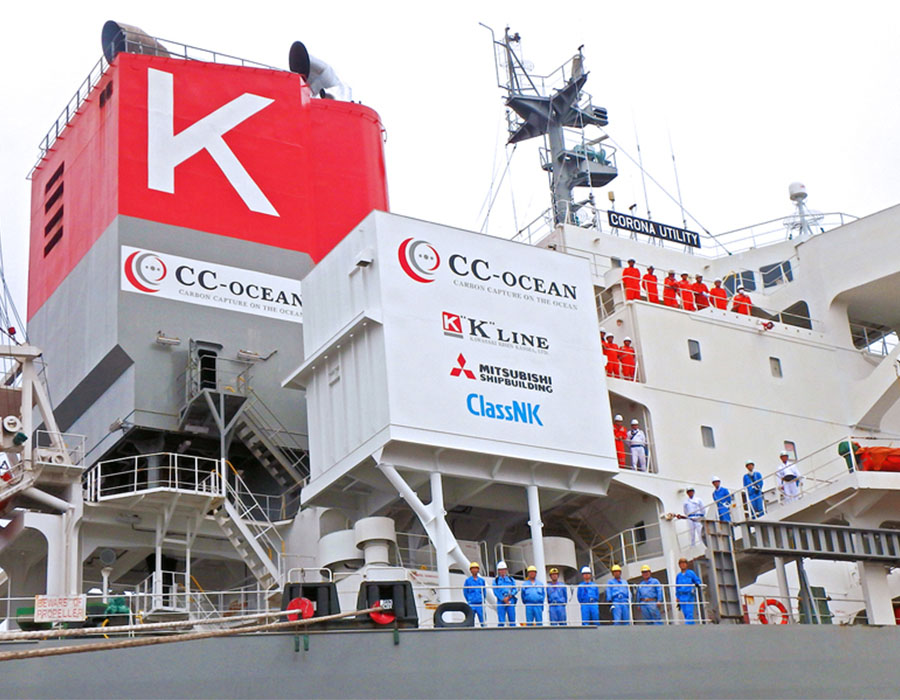 Mitsubishi Shipbuilding Co., Ltd. on Thursday (5 August) said it has been working with Kawasaki Kisen Kaisha, Ltd. (“K” Line) and Nippon Kaiji Kyokai (ClassNK), to conduct test operations and measurements for a small scale demonstration plant of the “Marine-based CO2 Capture System”, in order to verify the equipment’s use.

The equipment has now been installed on board the Corona Utility, a coal carrier for Tohoku Electric Power Co., Inc. operated by “K” Line, at MHI’s Honmoku Plant at the Yokohama Dockyard & Machinery Works.

This project is being conducted with support from the Maritime Bureau of Japan’s Ministry of Land, Infrastructure, Transport and Tourism (MLIT), as part of its assistance project for research and development of technological advancements in marine resource development.

The demonstration involves converting the design of an existing CO2 capture system for onshore power plants to a marine environment, and installing it on board an actual ship in service.

This project, called “Carbon Capture on the Ocean” (CC-Ocean), is intended to achieve CO2 capture at sea, a world first, according to Mitsubishi Shipbuilding.

Specialist Mitsubishi Shipbuilding engineers will travel on the ship during its voyage, providing commissioning of the compact CO2 capture demonstration plant, and conducting performance evaluation assessments while at sea, as well as analysis of the separated and recovered CO2.

By the end of fiscal 2021, MHI and “K” Line will conduct verification tests with the ship crew operating the demo plant, and evaluate its safety and operability, with the aim of practical application of the system as a marine-based, compact CO2 recovery system.

“This is the world’s first demonstration test to be conducted during actual ocean navigation,” claims the company.

“The knowledge gained will be used for future development of technologies and systems to capture CO2 from the exhaust gases of marine equipment and ships.

“Further, the captured CO2 can be recycled for use as raw material in synthetic fuel, providing a significant contribution to reductions in greenhouse gas (GHG) emissions.”

Dr. Nikos Späth, Head of Communications APAC, Maritime at DNV, tracks the humble beginnings of the world’s largest shipbuilder and discovers the conglomerate’s future plans on occasion of its 50th anniversary.