Integr8: It is worth looking beyond the bunker market for price direction 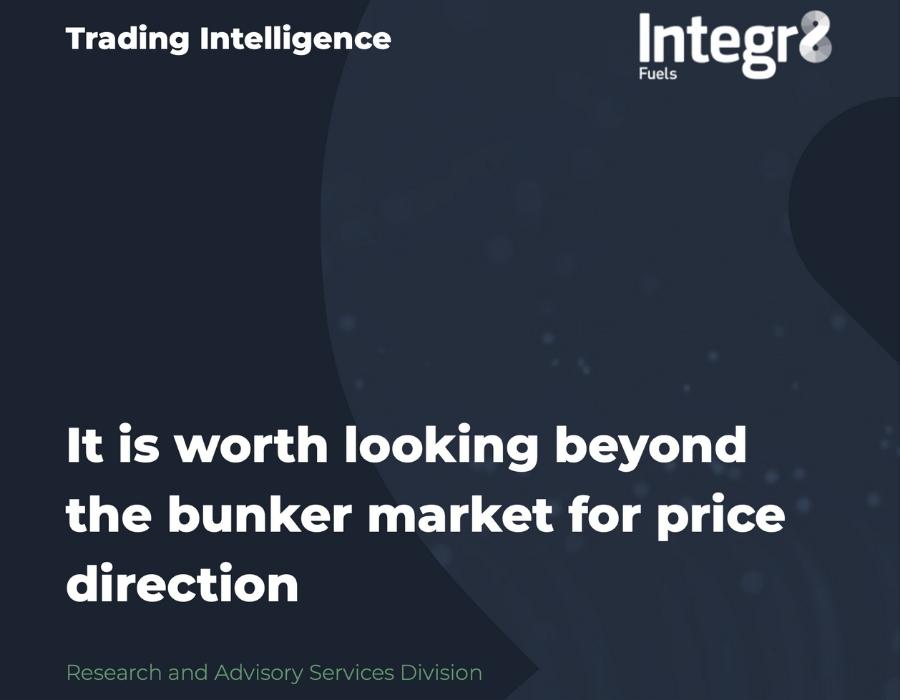 VLSFO prices have continued to slide, but the outlook is very murky.

VLSFO prices in Singapore are down even further to around $750/mt and also back in line with prices elsewhere, such as in Rotterdam. But when you look for a steer on the price outlook, the picture becomes pretty murky. 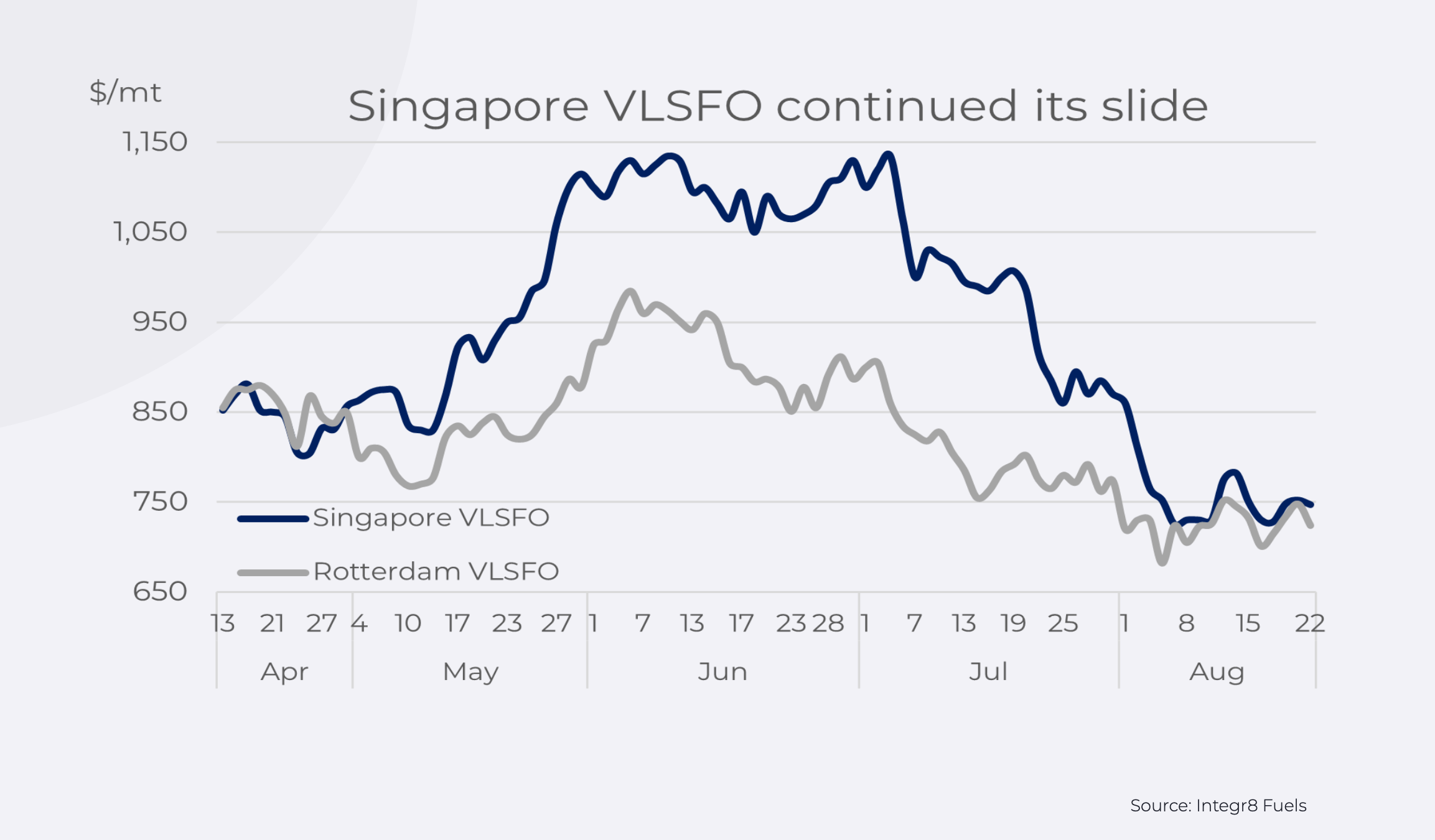 Everyone is looking at sky-high natural gas prices

This is one of those occasions when it is worth looking at the much bigger picture beyond bunkers and even beyond the oil industry, and at the moment there is a huge focus on natural gas from governments, industry and consumers.

To put this in context, current Brent crude oil prices are around 45% higher than 18 months ago; Singapore VLSFO is slightly higher, at 50% more, but the benchmark European natural gas price (TTF) is 1,500% more! We have seen what we believe as huge volatility in bunker prices, but this is nothing compared to what is happening in natural gas markets. 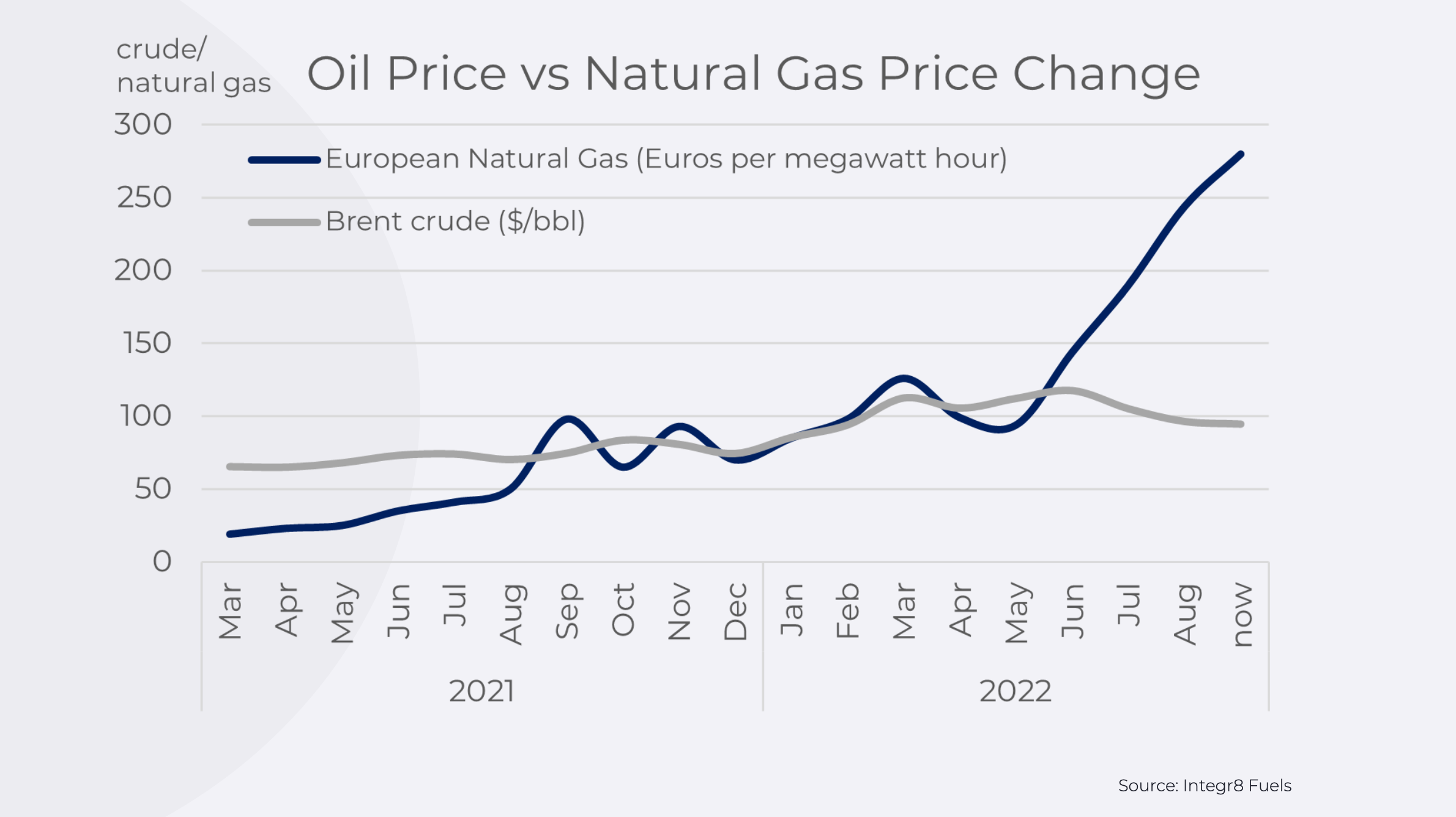 This is one of the political fallouts from the Russian invasion of Ukraine, and has created a nervousness around many commodity markets and prices, but especially natural gas. Russia supplies around 40% of Europe’s gas needs and so Europe has a direct vulnerability. In late July Russia said it would limit natural gas supplies to Europe, which led to a price surge and then just a few days ago Russia announced an unscheduled 3-day shutdown of the main gas pipeline from Russia into Europe (Nord Stream 1) and European natural gas prices went up a further 20%.

But this isn’t just a European issue; with Europe taking increasing volumes of US LNG supplies, this leaves less for other international markets, and so the supply and price impact is global.

Across the board, energy costs are significantly higher and a major contributor to inflationary pressures, but natural gas is something else and it is no surprise that this is having a devastating impact on government policy, industrial costs and consumer concerns and responses.

The economic threat from these high energy prices is well documented, with all the major economic forecasters tending to raise their projections for inflation and interest rates and revise down their projections for growth. At the same time, they are saying there are still major risks to the downside. The latest projections from the IMF show the declining position and the most extreme pressures on the advanced economies of Europe and the US. 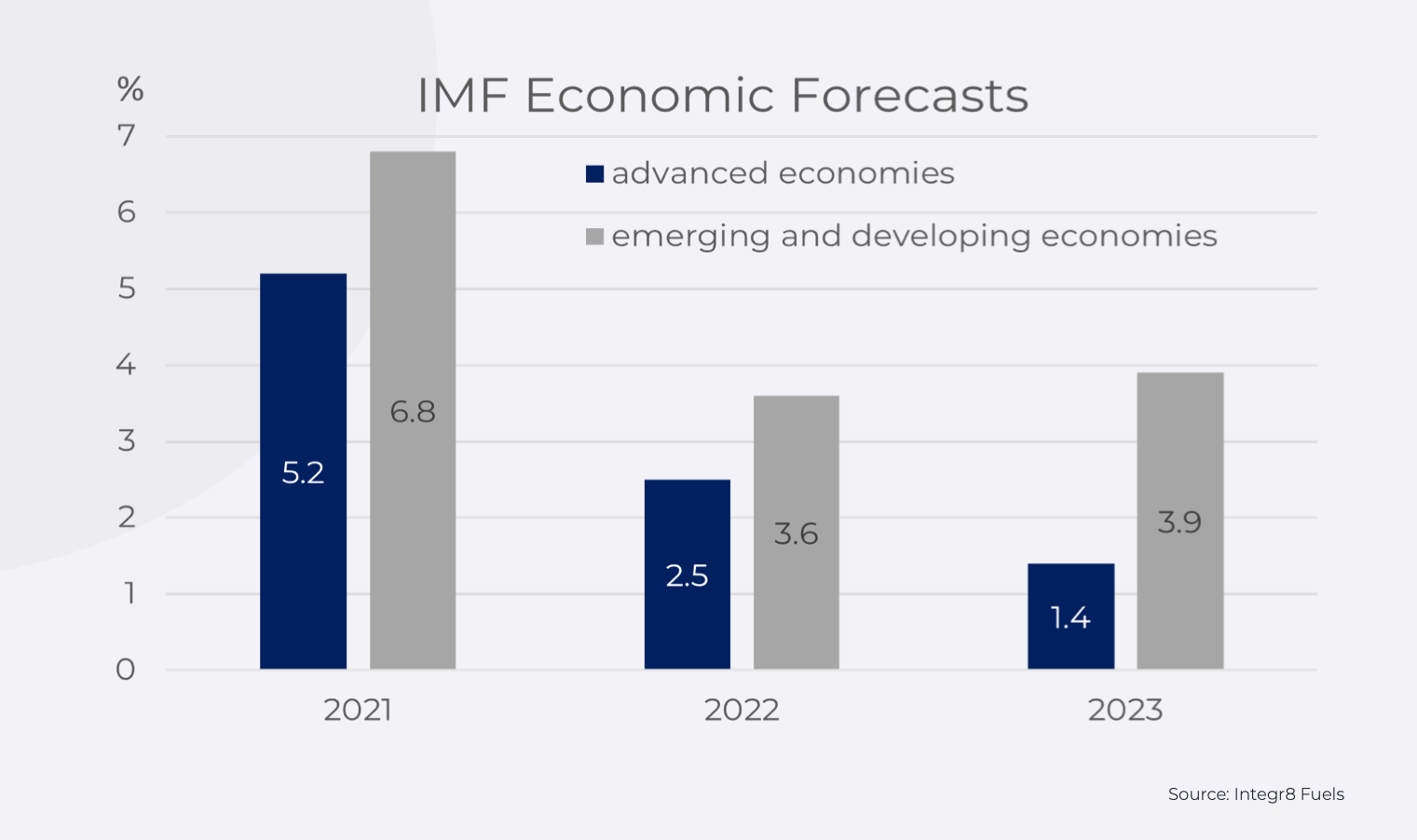 There is already a major effect, with crude and oil product prices down and Singapore VLSFO prices dropping by $250/ mt over the past month.

On the one hand these pressures would typically lead to weaker global oil demand and potentially even lower bunker prices. However, this may not be the case.

OPEC has re-affirmed its position that it is not going to hike oil production, with the new secretary-general (from Kuwait) making public statements that current high prices are because of external influences and that OPEC is already “doing its part”.

The latest EIA forecast for US crude production shows output going up by 0.9 million b/d over the next 12 months, but this is a gradual and relatively modest rise in the global context. There are also questions about the ability to source labour and equipment in the shale oil sector to support this rise. So, there is no quick fix from higher US production.

The one possibility for a production hike is if there is a successful conclusion to the US/Iranian nuclear deal and a lifting of Iranian sanctions. Oil prices will fall on the news and we could see a subsequent increase in crude output of around 1 million b/d over 6 months or so. There is often talk of an agreement on the horizon, but this is one where we just have to wait and see.

Therefore, without an Iranian deal, it is unlikely that we will see a sudden surge in crude production, which would lead to a further drop in oil and bunker prices, at least on a short-term basis.

We may think oil demand will be weaker, but no!

The other aspect that could reduce oil and bunker prices is weaker growth in oil demand. The bottom line for most consumers in current circumstances is to attempt to limit consumption. In the oil industry all the economic pointers would suggest consumer responses to use less oil, and signs are already there about people driving less because of the hike in gasoline prices. BUT despite this, the IEA has just raised its forecast growth in global oil demand by 0.4 million b/d for this year. This is because with natural gas prices at such high levels, industries are looking to switch from natural gas to oil where possible.

Although nowadays there is not a huge ability for commercial, industrial or power companies to switch from natural gas to oil, at the margin this does have an impact, and in winter the developments are likely to be even more pronounced.

Some European industries are already moving towards heating oil as a replacement for natural gas and in the northern hemisphere winter we can expect higher demand for fuel oil into the power generation sector, especially in some Asian countries. Current forward curves would indicate these conditions continuing through to end 2023 (although forward curves can change quickly).

On the back of exceptionally high natural gas prices and the switching process, the IEA has raised its forecast demand for fuel oil this year by 150,000 b/d and gas/diesel oil by 160,000 b/d since their March outlook. At the same time, they have raised their outlook for jet demand on increased air travel and downgraded their views on gasoline demand in response to higher prices. 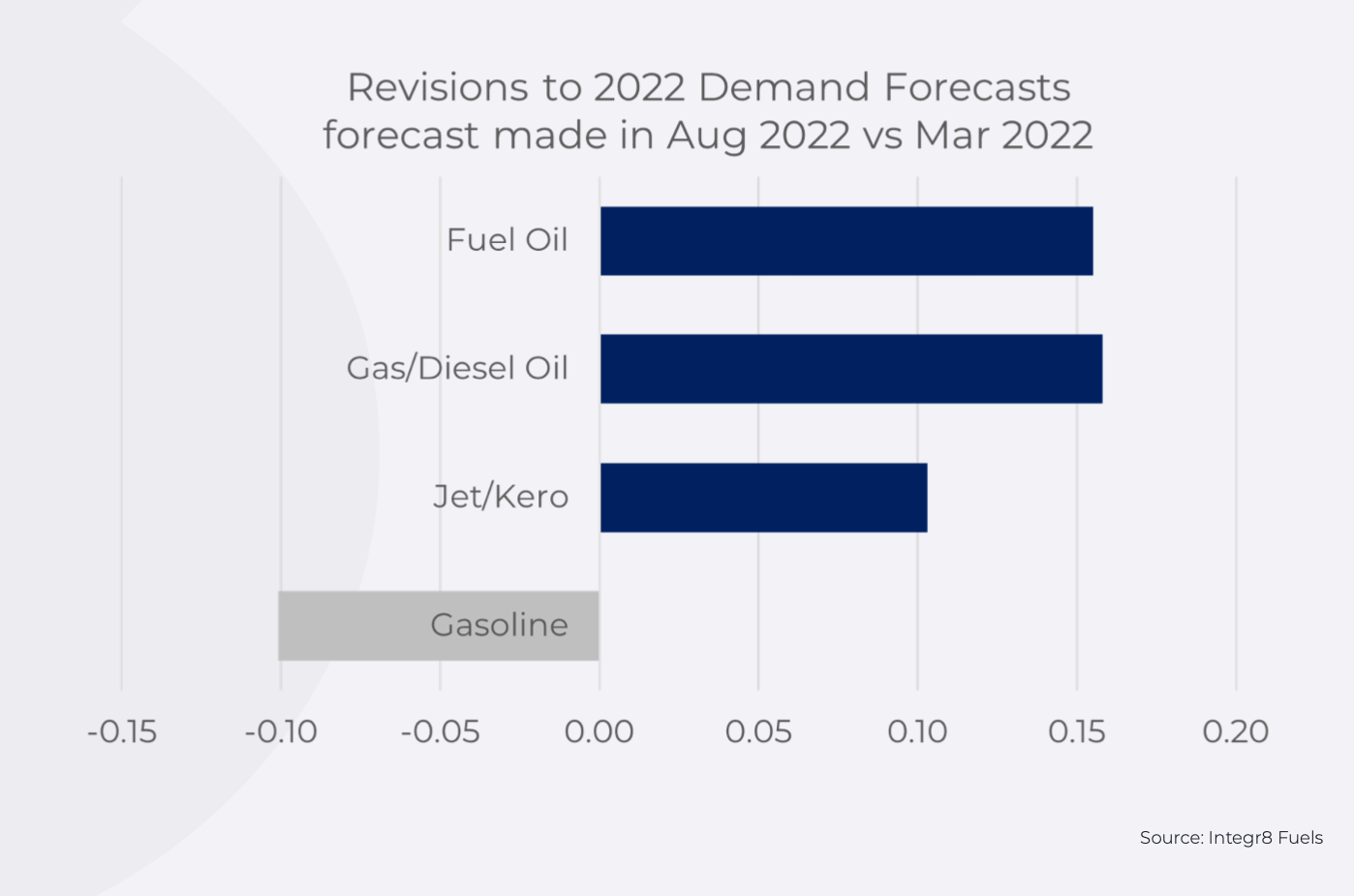 Therefore, in the near term there appears to be conflicting issues surrounding oil and bunker price direction, with ‘conventional’ demand forecasts under downwards threat, but demand from switching from natural gas to oil potentially outweighing this and lifting oil demand forecasts.

In conclusion, a lot of the headline news may suggest bunker prices falling, but when you scratch below the surface it may not be so obvious.

Given all of this, Russian natural gas exports to Europe could be something to watch as a price indicator for bunkers.

DSME and POSCO have jointly developed the technology for 10 years from pretreatment to welding in order to use high manganese steel as an LNG fuel tank.

The two tankers are expected to be able to carry around 30,000 lb each of marine fuel and will be built at the Hashihara shipyard of Shin Kurushima Dockyard.