Integr8 Fuels: Why are VLSFO prices so high, especially in Singapore? 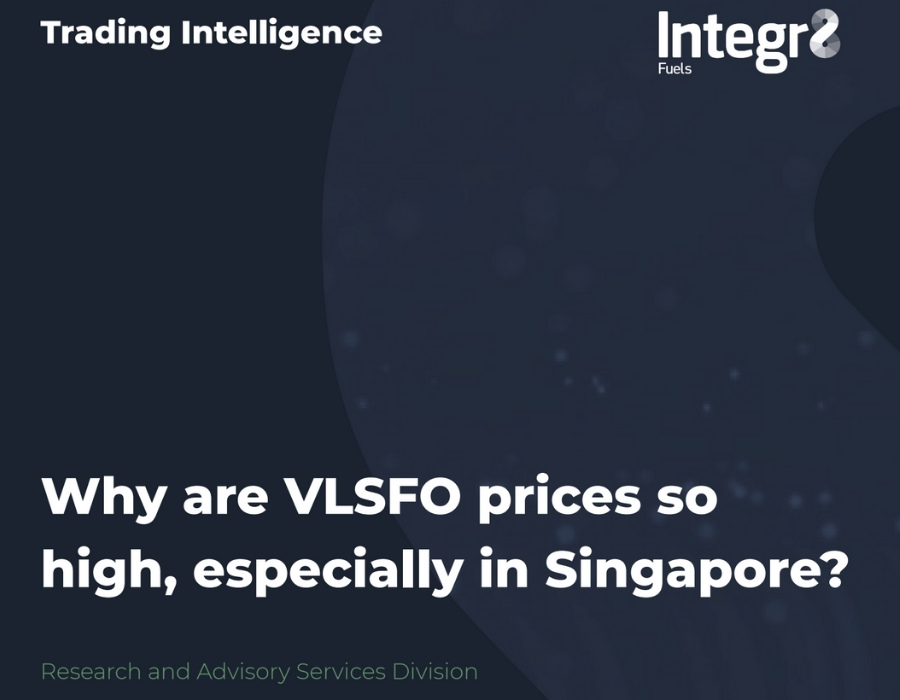 Last month we wrote about the fears of recession versus the tightness in product markets and that tightness in products was definitely ‘winning’. Another month on and it’s oil products that are again driving VLSFO prices even higher! Recession is often mentioned, with obvious higher energy and food costs, central banks hiking interest rates and economic forecasts being downgraded, but the lack of supply and low levels of stocks for key oil products has the overwhelming focus for most oil industry players at the moment. 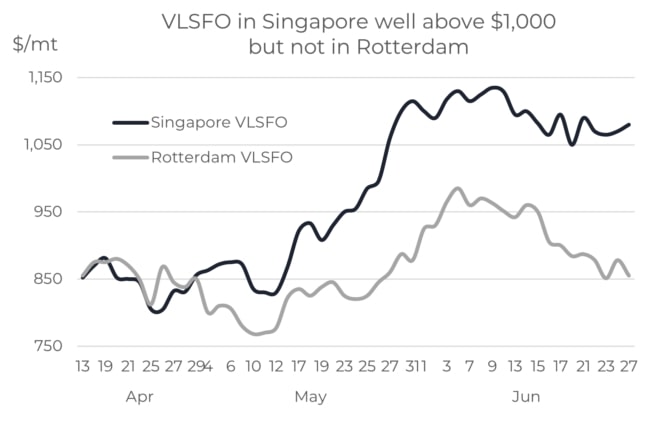 In our report a month ago we highlighted the extreme highs in refinery margins, with an indicative global measure up from a ‘norm’ of around $5/bbl to $30/bbl in April/May. These margins had started to ease at the end of last month, but since then they have rebounded, and are back close to $30/bbl. The indicator has been one to watch, and once again reflects the current severe tightness in oil products. 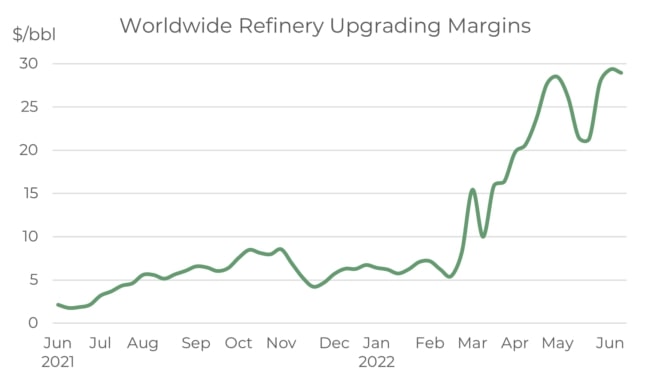 For us in bunkers, it is worth noting which products are driving prices and margins so high, especially as VLSFO is typically a blended product and/or a decision within the refinery process. Understanding this will give us a signal for what products to watch as an early indicator for VLSFO prices potentially rising further, or to start falling.

Focused on which products are driving VLSFO higher

The graph below illustrates the crack spreads between FOB product prices in Singapore and the price of Dubai crude, and how this has changed from late February to late June this year. Firstly, the current spreads on gasoil/diesel, jet-kero and gasoline are huge at around $500/mt. The gain in the gasoil/diesel crack has been the greatest, going from $125/mt in late February to close to $500/mt more recently (almost a four-fold increase). Gains in the jet-kero crack have been similar, and where as the increase for gasoline has been less, the spread is still $500/mt and around double the level of 4 months ago. 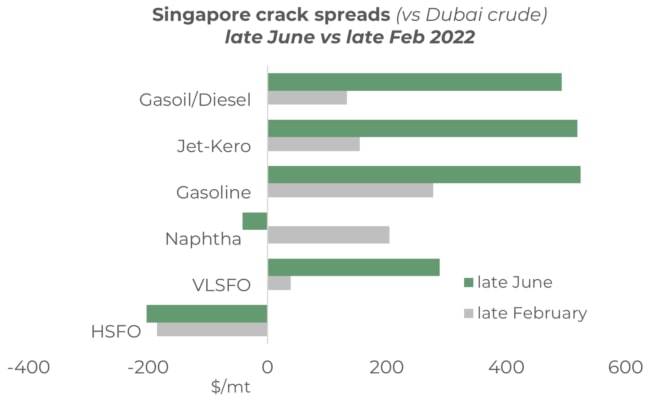 It is tightness in these ‘transport’ fuels that is driving the crack spreads and refinery margins to record highs. Interestingly, the Singapore naphtha crack has reversed and is now negative versus a $200/mt positive contribution 4 months ago, although this has been influenced by a strike in South Korea which forced the shutdown of naphtha crackers; the strike has ended and operations are reportedly returning to normal.

For us, looking at VLSFO pricing, it is the nature of the product and the inter-relationships with high priced transport fuels that is driving VLSFO prices so high, especially in Singapore. The position in the east is stronger than in the west, with exceptionally low diesel and gasoline exports out of India and China resulting in highly restricted supplies east of Suez. However, this is not to under-estimate the tightness in Rotterdam, where prices and margins are still very high!

In complete contrast, HSFO prices are down

Developments in the market for HSFO are a complete contrast to the high-priced influences on VLSFO. HSFO crack spreads are typically negative as it is now essentially a by-product in the refining system. Since February there has been a slight further negative move in the crack spread, down to around minus $200/mt. In Asia, reports of Russian material moving this far and recent refinery problems in Malaysia have both meant surplus HSFO being sold into the market, and this has helped weaken prices.

Overall, in recent weeks HSFO prices have eased in Singapore and Rotterdam, with both markets now more-or-less in line, and at just below $600/mt. 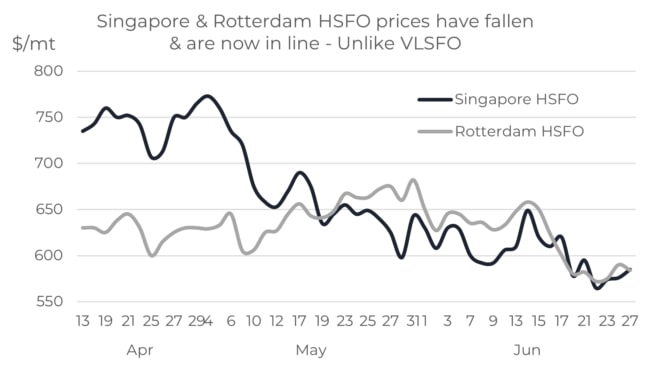 The more extreme price movements in Singapore have led to a much wider VLSFO/HSFO price differential. Just two months ago this spread was at $100/mt; now it is $500/mt. Although Rotterdam VLSFO prices have not hit the same highs as in Singapore, the VLSFO/HSFO spread is still at $300/mt. 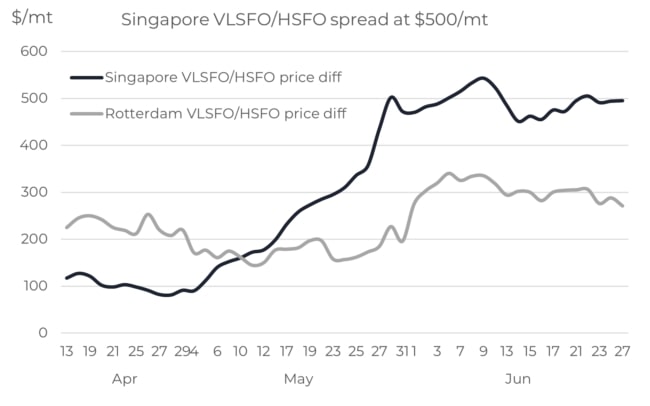 These are differentials that owners of ships with scrubbers didn’t even dream about two months ago; now the spreads are at or above expectations made when initial scrubber investments were made. This will be extremely important for owners of VLCCs with scrubbers, where current market conditions are dire. A non-scrubber VLCC is currently earning around minus $5,000/day on the spot market, where as a scrubber-fitted one is earning close to $20,000/day; not very high, but at least covering more than fixed operating costs.

The talk of recession will again continue, but for now tightness in products is more than compensating for economic fears. The IEA reported a drop in global refining capacity last year, something that hasn’t happened since the early 1990s, and there are no quick fixes to constraints in the refining industry. Significantly, net gains in capacity this year and next year are only expected to reach a combined 2.6 million b/d. Also, although we have not mentioned crude oil markets (nor the war in Ukraine) in this report, the ExxonMobil CEO recently spoke out about 3-5 years of “fairly tight markets” because of lack of investment since the covid impact.

We have seen that things can change very quickly and at the extreme it’s the doomsday scenario of an economic and stock market collapse that perhaps some people fear.

However, in terms of what is happening now, economic threats are leading to downwards revisions to future oil demand, but demand is still forecast to increase, just not by as much as before. Therefore, it seems we are looking at sustained pressures on a currently constrained system. So, for now, the key pointers to watch for price direction are still refining margins (they tell us a lot about the market), with also a keen focus on any increase in product exports from China and India (they are negligible at the moment).’

Prime’s Bunkers will continue its operation under the name of Sing Fuels Pte. Ltd. (Hellas); Founder Irene Notias will continue to lead the business.

Port of Singapore records strong maritime growth in past decade

A total of 63 cases, included those detained in OP Jangkar Haram, have been detained under the Merchant Shipping Ordinance 1952 by Johor in 2021.