Integr8 Fuels: VLSFO then, now and next 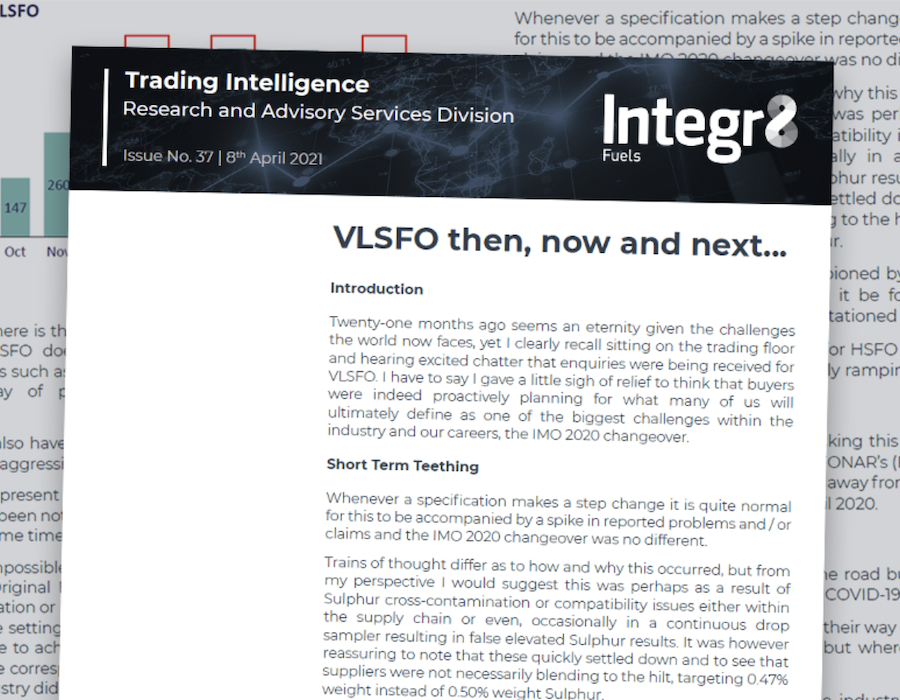 Chris Turner, Manager – Bunker Quality and Claims at Integr8 Fuels, the bunker trading and brokerage arm of Navig8, on Thursday (8 April) published a summary on how the energy and shipping industry navigated the low sulphur fuel transition, and what future directions will take given the upcoming carbon reduction targets:

Twenty-one months ago seems an eternity given the challenges the world now faces yet I clearly recall sitting on a trading floor and hearing excited chatter that enquiries were being received for VLSFO. I have to say I gave a little sigh of relief to think that buyers were indeed proactively planning for what many of us will ultimately define as one of the biggest challenges within the industry and our careers, the IMO 2020 changeover.

Whenever a specification makes a step change it is quite normal for this to be accompanied by a spike in reported problems and / or claims and the IMO 2020 changeover was no different.

Trains of thought differ as to how and why this occurred, but from my perspective I would suggest this was perhaps as a result of Sulphur cross-contamination or compatibility issues either within the supply chain or even, occasionally in a continuous drop sampler resulting in false elevated Sulphur results. It was however reassuring to note that these quickly settled down and to see that suppliers were not necessarily blending to the hilt, targeting 0.47% weight instead of 0.50% weight Sulphur.

The lack of availability was also championed by many an industry voice as a major challenge, whether it be for HSFO or VLSFO depending on which camp you were stationed in.

Thankfully again neither availabilities for HSFO or VLSFO were too badly affected with VLSFO ports rapidly ramping up to more than 400 globally. 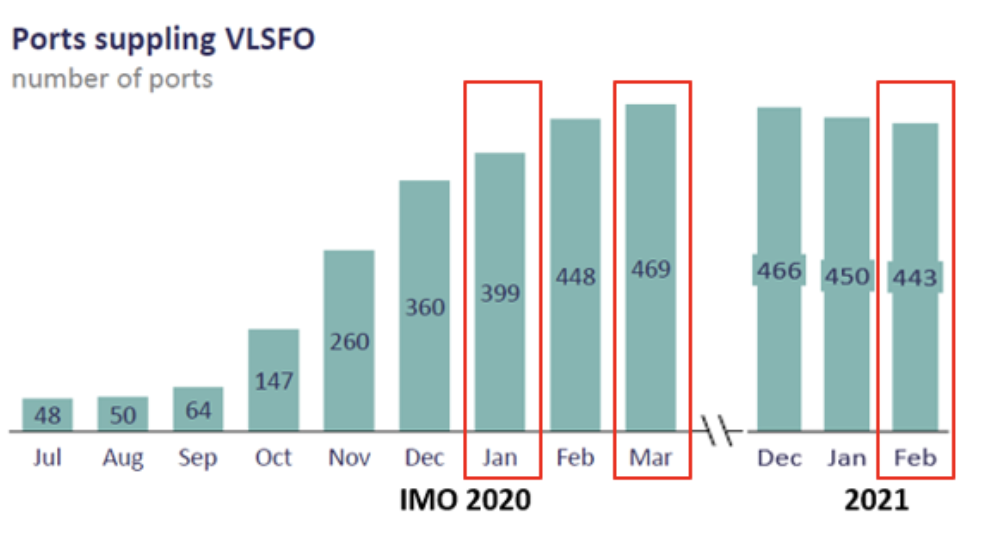 As for unavailability, the simplest way of tracking this was via the IMO website and specifically the number of FONAR’s (Fuel Oil Non Availability Reports ) lodged which quickly fell away from around 50 in January 2020 to less than a handful by April 2020.

Bumps in the road

In most years we routinely face bumps in the road but in 2020 a proverbial sinkhole appeared in the shape of COVID-19.

Bad news on the Television eventually made their way into our day to day, challenging not only how we work but where we would work.

Again I can only praise the resilience of the industry in general when looking back on some of the unexpected consequences of COVID-19.

One of the first alerts raised was the possibility of vessels storing fuels for far longer than anticipated, resulting in degradation . Thankfully this did not result in too many issues from our perspective but the storage temperatures of the “goldilocks” fuels (as they have been so eloquently recently christened) remains important to carefully manage – Like the porridge in the story, not too hot, not too cold but just right.

Another consequence was the lack of demand for road fuels challenging the bunker space with VGO flowing into the marine pool rather than the catalytic cracker and as a result spiking paraffinicity and Pour Point.

As the price crack narrowed between VLSFO and MGO the residual pool unsurprisingly became a new home for distillates, this tracked by significantly lower viscosities across Q1 and Q2 of 2020, although these have since recovered.

As for Quality, Claims have been sporadic to this point mainly revolving around Stability, Sulphur non-compliance or Water content, but in early May ARA was significantly affected by TSP issues

Any Alleged difficulties onboard also generally revolved around change-over or handling practices which from experience on occasion did not move with the changing goalposts as a result of the new fuels.

Where are we now?

The sheer variance of VLSFOs from port to port continues to challenge all stakeholders across the industry, especially In addition to the well-known and documented stability challenges where questions remain as to the long-term stability of VLSFO. Unfortunately this has not been helped by inconsistent cold flow advice being provided to end users which may result in further fuel degradation.

It is true VLSFOs are waxier but we must balance the temperatures of storage and purification to the animal itself and not just the waxes as we may inadvertently tip the fuel over the edge from the point of thermal stability with it falling apart as a result.

That said, the knowledge of Wax Appearance Temperature (WAT) and Wax Dissolution Temperature (WDT) are useful to know but I remain concerned too much bias is given towards them from some quarters.

After all WAT is simply the point at which, when cooling the first wax crystals detected and WDT the point waxes are last detected when heating the fuel.

Low Viscosity combined with the higher storage temperatures needed due to the waxy fuels may result in fuels becoming non-homogenous across the supply chain.

These conditions create the possibility of creating a settling tank scenario, allowing particles/water/metals etc to settle out due to the bigger density differential from VLSFO to Water 0.945 Kg/Ltr v 1.00 kg/Ltr compared to 0.99kg/Ltr v 1.00 Kg/Ltr for HSFO which could result in some very poor fuels making their way to a vessel, if for example a shore tank is on low suction – where such contaminants will concentrate.

A Silver lining however here is that from a claim’s perspective the runnier and lighter VLSFO does allow for the more efficient removal of contaminants such as elevated Aluminium and Silicon which may be a way of preventing costly and litigious Debunkering’s.

From time to time we also have our heads turned technically by what appears to be very aggressive blending.

These fuels tend to be present in more outlying ports than the blending hubs but have been noted to have Viscosity as low as 5 cSt and Pour Point at the same time being 30 Deg C.

Such fuels create an impossible position for the Chief Engineer when trying to meet Original Equipment Manufacturers (OEM) requirements for Purification or Injection (which require 20cSt and 12cSt respectfully) as the settings onboard needed to achieve the viscosities are impossible to achieve given the fuel would already resemble a candle at the corresponding temperatures required. It is arguable that the industry did not see this coming.

Where are we heading?

The industry continues to cry out for transparency across the supply chain rather than the historic opaque world of smoke and mirrors. Interestingly COVID-19 may have provided a catalyst for the industry to work more remotely and with that move with the times technically.

One such development is the use of electronic BDNs or documentation and this, combined with traceable and regulated measurements (such as in Singapore) may ultimately negate many of the safety issues associated with access and egress to vessels and barges and may also ultimately provide for efficiency savings too.

This would of course not be an overnight fix, the industry has some way to go to compete with the level of traceability that the aviation industry has for example, but I do not think we are too far away from a ‘blockchain’ type scenario where the end-to-end traceability removes many of the historic BDN inaccuracies or malpractice concerns.

Pricing and commercial factors will continue to challenge the bunker space and blend recipes as a result. Given the growing crack between MGO and VLSFO It would not be entirely unexpected to see Sulphur climbing towards the 0.50% limit with infractions creeping up nor would it be unexpected to see water content increasing.

Thankfully, we are yet to see wholesale evidence of obscure cutters making their way into the market, similar to the Houston problem – we can but hope lessons were learned in 2018.

As for the direction of travel for ISO 8217 Specifications, as already mentioned no one predicted a fuel could be sold as a 380cst RMG with a viscosity of 5cst yet it has come to pass.

Commercially there is nothing to stop this but ultimately operationally such fuels can create huge challenges. Therefore minimum viscosity specs would be a sensible addition with table 2. Of ISO 8217.

We also cannot forget that operational setups have changed significantly with fuels no longer being purified at high temperatures (98 deg c) – due to lower viscosities, and this creates the argument that the TSP test (which uses 100 deg C) is not mirroring what we are actually doing onboard.

Ultimately however until such time that we as an industry move to a single latest specification we will never rid ourselves of the challenges that historically remain, within the almost 16 year old ISO 8217:2005 for example. Indeed driving change on this level from Refinery to the Hull of the ship, in doing so spanning bunker contracts and charter parties alike is the only way to finally resolve this situation.

And last but not least, We cannot forget the drive for the industry to reduce Carbon Emissions, one of which Is Bio-fuels and with these in mind I want to raise awareness of the likely increase of biofuels in certain tonnages going forwards.

This may be particularly relevant for the older tonnage as they pave the way to meet Carbon Reduction targets without expensive retrofits (ammonia/methanol etc) and ultimately prolong the lifespan of the ship.

This will however again need wholesale changes, including specifications and tact in the industry in general given some of the recent GCMS alerts raised are for exactly the components we will inevitably be blending.

Until the next time, stay safe.