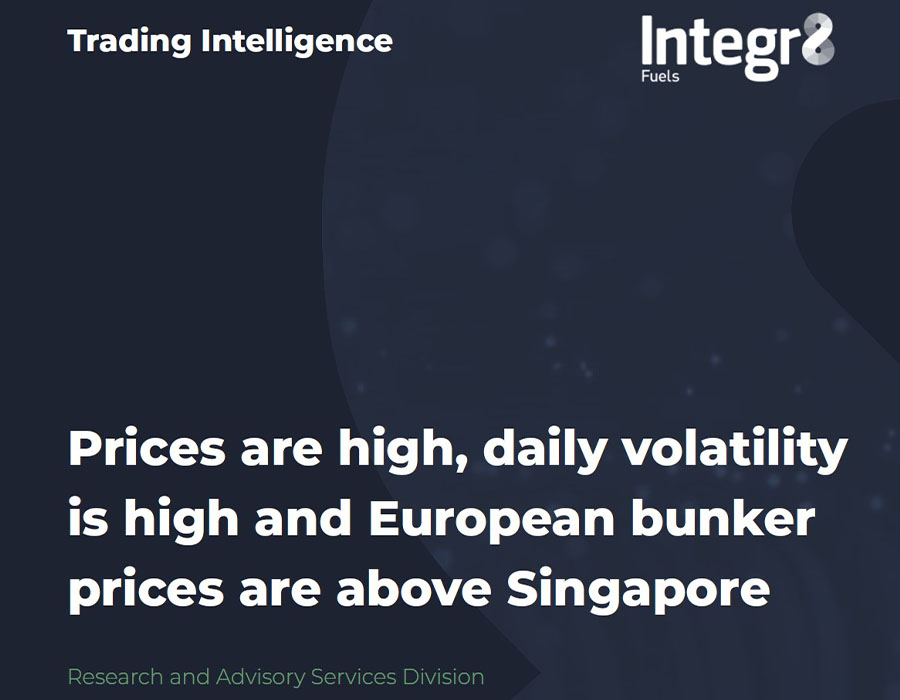 Just four weeks ago we wrote about Singapore VLSFO prices being at an all-time high of $765/mt. Since then, Singapore prices have hit $1,027/mt and Rotterdam prices have been even higher at $1,109/mt. The reasons are obvious and bunker prices clearly continue to move around developments and expectations surrounding the war in Ukraine.

We can only look at the microcosm of our own markets within what are the more extreme, far-reaching and horrific events in Ukraine, but bunkers are a global market, with crude prices tending to underpin our sector.

Since hitting more than $1,000/mt on March 9th, VLSFO prices have eased back on the prospects of weaker Chinese oil demand because of the recent surge in covid cases and major city lockdowns. The potential for higher oil supply and the release of strategic stocks from other countries has also taken some sting out of the market. However, the war in Ukraine continues and we are still facing huge challenges operating in such a volatile and uncertain market. Not only have buyers and sellers in the bunker market been faced with this huge rise in prices since the Russian invasion, but the volatility within each day’s trading has been enormous. The graph below illustrates the price range and volatility in Brent front month futures each day since the beginning of February. 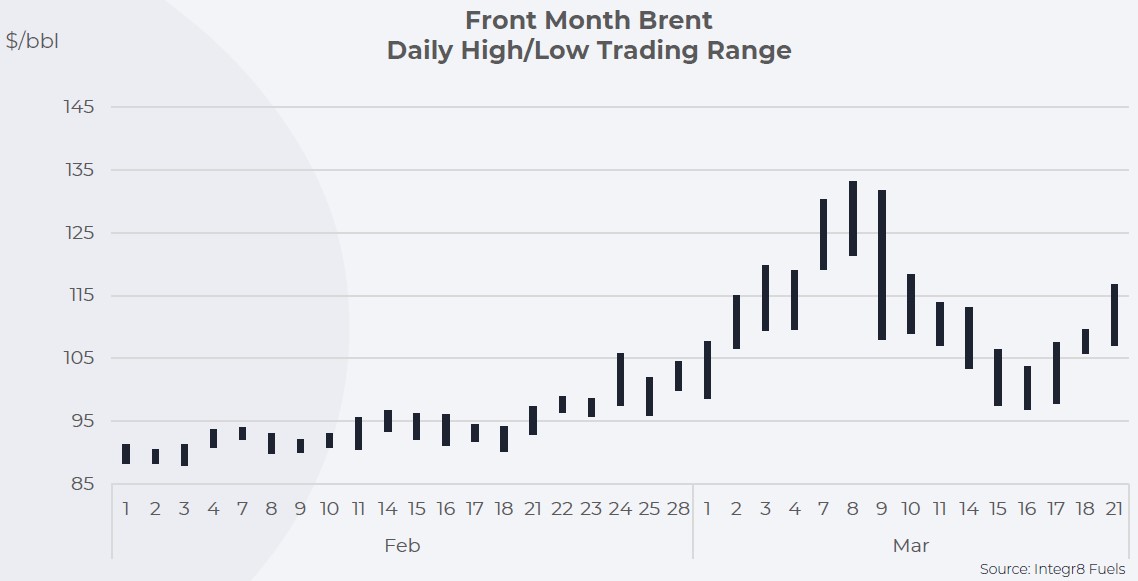 Before the invasion, Brent futures were trading in the high $80s and the daily high/low spread was around $2/bbl. This was equivalent to a daily price volatility of around $13/mt on bunkers. Volatility has been a quantum leap higher since the invasion, with the average daily high/low range in the Brent market reaching $9/bbl, which is equivalent to a daily movement of close to $60/mt on bunkers! This is still the case and a real challenge – At its peak, Brent varied over a $20/bbl range in just one day (March 9th) and this was equivalent to some $150/mt in the bunker sector.

These developments have forced a shift in buying and selling bunkers, where prices may only be quoted on firm enquiries, validities on price quotes may only last a few minutes and all with much tighter credit terms in such a high price world.

Rotterdam bunker prices are now at, or above Singapore

Regional variations in price do take place and clearly the closer proximity of Western Europe to Ukraine and Russia has led to the unusual position of Rotterdam bunkers moving above Singapore quotes.

This position of Rotterdam at or above Singapore prices is new and could continue, based on heavy restrictions on Russian crude exports to Europe. This is likely to come either through current circumstances where companies are unwilling to take or deal in Russian cargoes or through more formal sanctions. Either way, Europe is the most vulnerable market to the loss in Russian oil supplies and this has pushed prices in Europe even higher than in other international markets.

Historically, VLSFO prices in Singapore have typically been $20-30/mt above Rotterdam. Towards the end of last year crude oil prices increased and VLSFO strengthened even further relative to crude, and this pushed the Singapore premium to Rotterdam out to $60/mt. The events in Ukraine have unwound all of this, with Singapore and Rotterdam VLSFO prices now in line. 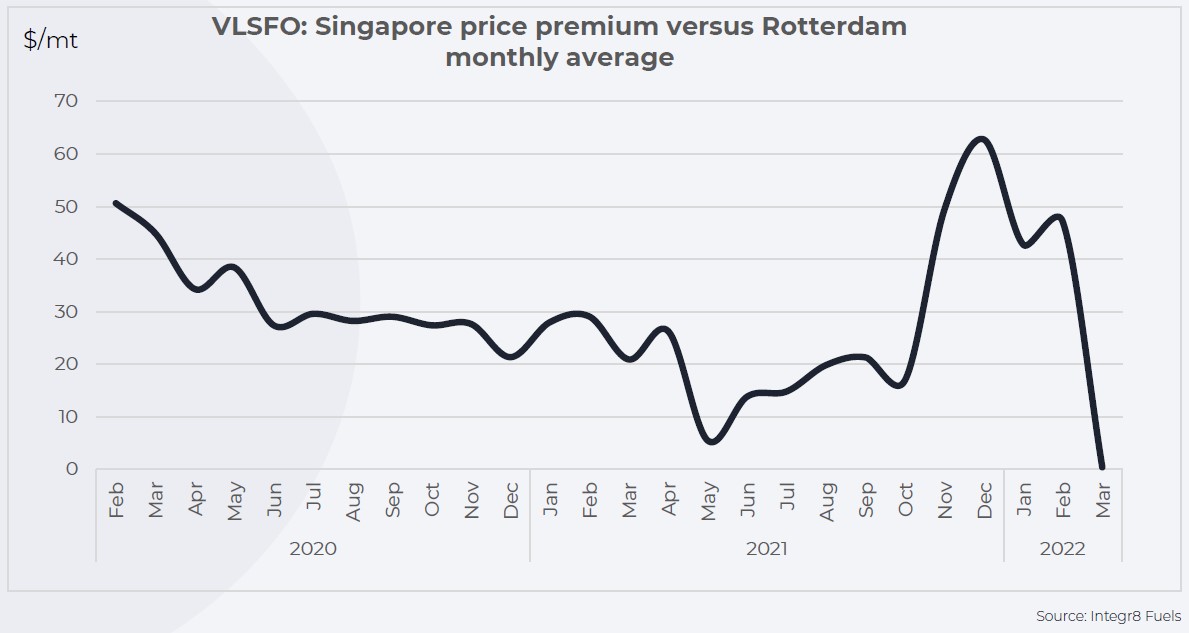 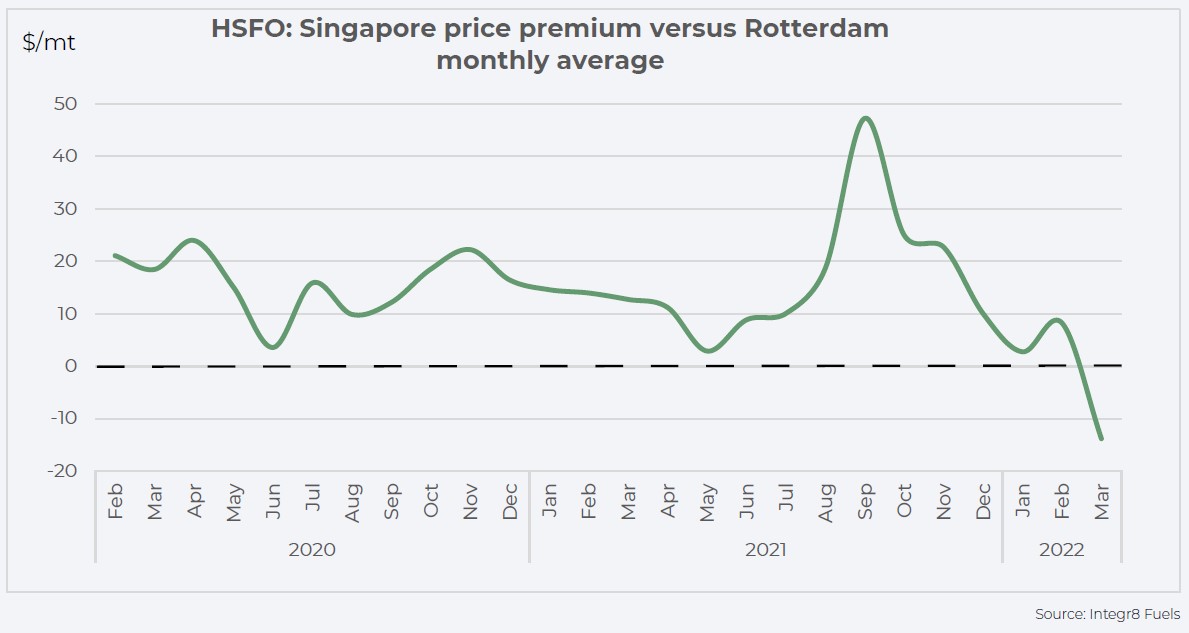 All bunker markets are threatened, Europe is the most exposed

These shifts in prices and price relationships are explained by the Russian invasion. At the end of last year Russia exported around 5 million b/d of crude and 2 million b/d of products, with two-thirds of these volumes going to Europe.

In the 5 million b/d Russian crude export market, around 3 million b/d went to Europe (via the Baltic Sea, Black Sea and Druzbha pipeline). The high dependence goes both ways, with the 3 million b/d of Russian crude going in to Europe accounting for one-third of all crude imports into the continent, stressing the current tightness in the European market. In comparison, Russian crude to the US only accounts for around 5% of their total imports, and Russian trade to Asia has been far less affected.

The same story is apparent for oil products, with the majority of Russian exports going to Europe, and Europe relying on Russia for almost 40% of all its total product import requirements. 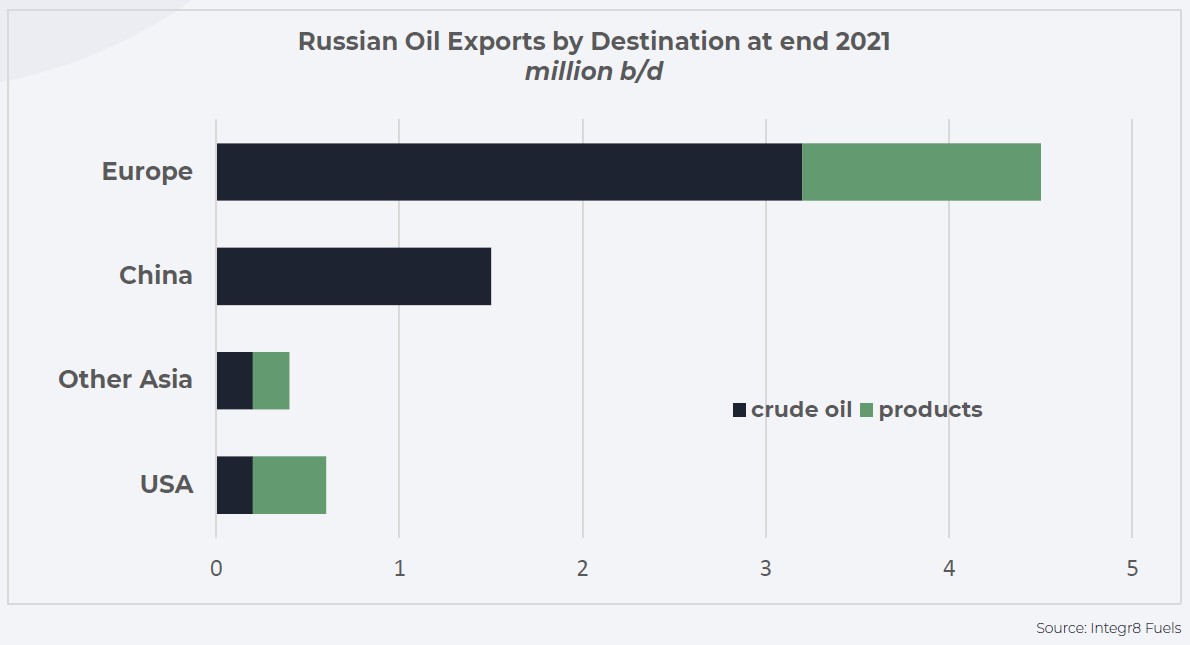 In fact, the Russian diesel/gasoil export market is also having a major impact on the Rotterdam market, with more Russian volumes going on shorter haul trades to Germany and Poland, with lower volumes getting further west into France, the UK and Rotterdam. In addition, the European refining system cannot easily make up for the shortfall in Russian diesel/gasoil either in upgrading capacity or the limited ability to use alternative crude supplies. The situation is likely to be exacerbated in the short term as European refiners go into their seasonal spring maintenance programs; even if some refiners can delay maintenance, this will not solve the European gasoil tightness.

Hence, Europe’s heavy reliance on Russian crude and products has had a major and disproportionate impact on relative bunker prices in Rotterdam, with price rises even greater than the steep increases seen in other international markets.

It is very difficult to see a quick return to previous levels of Russian oil trade to Europe, and so this shift between European and Singapore bunker prices could be a continuing feature for now.

At the moment Russia is having to heavily discount its selling prices to get oil volumes sold and the chances are these volumes will end up in Asia. In the longer-term it will be the trading relationship between Russia and Europe, and any resulting shift in trading patterns that will determine if there is a structural change in the Rotterdam/Singapore price relationship. Global trade is a balancing factor and we will have to see what happens to European fuel oil flows to Asia and/or Middle East product exports and if these are pulled from eastern destinations to western destinations.

Other things are happening however, will take a ‘back seat’…

There are other factors influencing prices at the moment, including:

For now, the focus has to be on the situation in Ukraine and its outcome, and where international relations with Russia end up.

The Texas and South America oil company is building a crude oil refinery complex in the Permian Basin.

The CMA CGM Antoine De Saint Exupery a strong symbol of the group’s dynamism and development, it says.

Listing is to create a public platform for which Banle shares can be traded via an established exchange, which is expected to increase its investor base, said SIL.

The Asian Freight, Logistics and Supply Chain (AFLAS) Awards is organised by Asia Cargo News, and winners were determined by votes cast by its readers.

With the IMO 2020 regulations requiring 0.5% emissions from marine vessels, ENOC said it sees further growth for its high-end lubricants in the Spanish region.