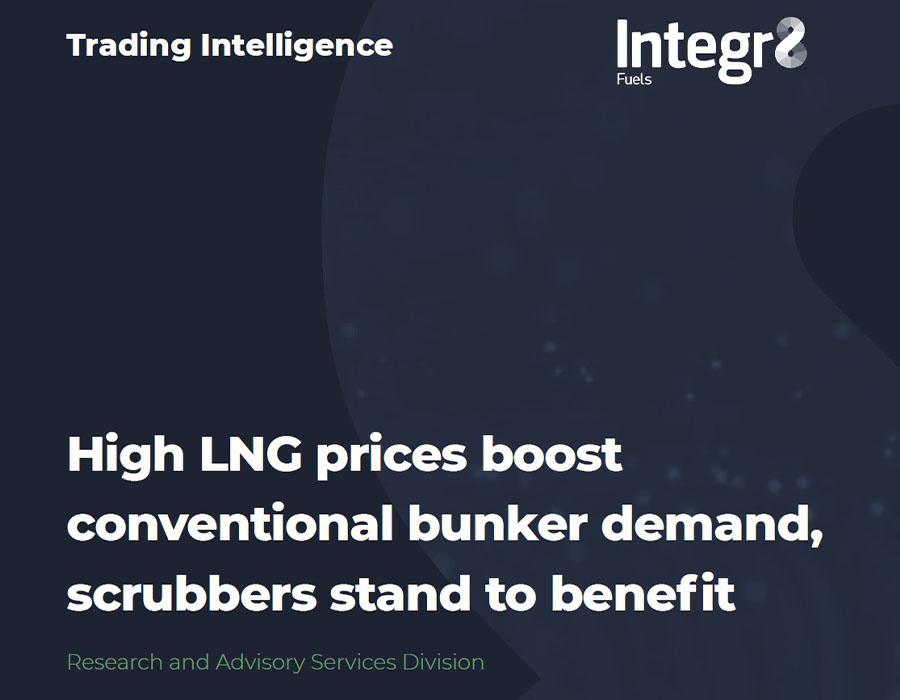 This article also reviews the various reasoning behind the widening price spread between low and high sulphur bunker fuels and how this has benefitted scrubber equipped tonnage.

Less than two years ago countries across the world were closing their borders and locking down cities to stop the spread of Covid-19. Very few analysts could foresee crude oil going from below $20/bbl back then to almost touching the $100/bbl mark currently and gas prices staging an even more impressive comeback, from below $2/mmbtu in May 2020 for spot LNG in Northeast Asia to almost $50/mmbtu at the end of December 2021. While gas prices have retreated from their recent peaks, they remain very high historically. This is pushing owners of LNG carriers to burn cheaper conventional fuels adding to the growth in oil products demand. One “side effect” of such growth is more high sulphur fuel oil availability which widens the price spread between low and high sulphur marine fuels thus benefitting the scrubber tonnage.

With high gas prices, LNG carriers are increasingly burning cheaper VLSFO and LSMGO and Integr8 Fuels have seen a growing number of such enquiries in recent months. Figure 1 (below) compares an index compiled by Integr8 Fuels showing an increase in the volume of conventional bunker fuels bought by LNG carriers with how this increase coincided with the rise in LNG prices. There was however a spike in buying interest around the start of 2020 despite low LNG prices, which can potentially be attributed to the IMO2020 switch given the supply and price uncertainties at the time. The nature of LNG shipping is that gas tends to boil off at a certain rate during the voyage, so the majority of LNG carriers are built capable of burning this boil-off gas as bunkers, rather than releasing it into the atmosphere, along with conventional fuels. Historically, most of the time LNG prices, adjusted for the energy content, stayed below conventional bunker fuel prices with the LNG carrier bunker fuel mix skewing sharply towards boil-off gas and only supplemented by conventional fuels depending on a number of commercial and operational factors. Figure 2 shows how LNG lost its price competitiveness to MGO (and thus to a greater extent VLSFO) resulting in LNG vessel operators minimising the use of boil-off (which has now more value as cargo) and increasing purchases of VLSFO and LSMGO. 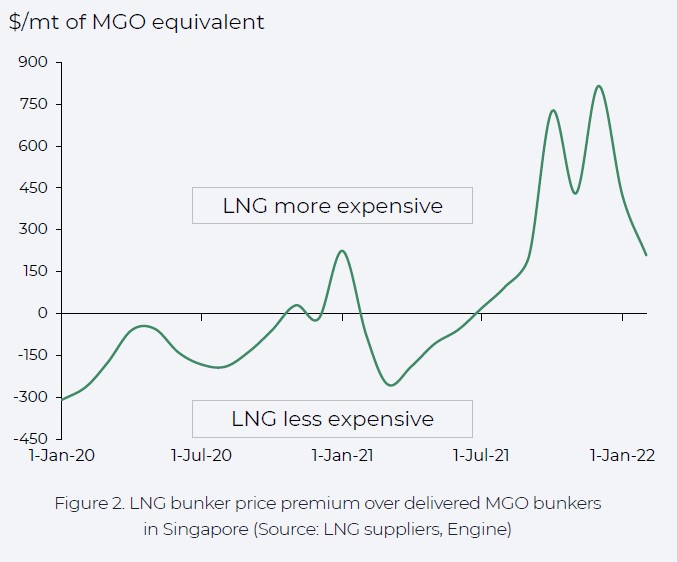 On an MGO equivalent, LNG bunker prices in Singapore were up to $200/mt more expensive than MGO at the end of January. This price spread was as wide as $800/mt back in December before narrowing more recently. Elsewhere in the world LNG bunkers are even more expensive with Rotterdam and West Mediterranean quotes seen at a $50/mt and $450/mt premium to Singapore respectively.

While gas prices are likely to ease off going into Q2 they are still expected to remain at much elevated levels historically. This means that the likelihood of a prolonged period of LNG carriers running on conventional fuels remains relatively high.

While the switch takes some demand off from LNG, it contributes to VLSFO and LSMGO demand. With the global LNG fleet of around 620 vessels and having taken out the vessels that can only burn conventional fuels, we applied fuel consumption, gasoil to fuel oil buying ratios, LNG to conventional fuels switch estimates and the differences in the energy content to come up with an approximation of how much extra oil products demand this switch can add (Figure 3).

Hypothetically and if sustained for a year, the LNG to conventional fuels switch could potentially add an extra 60,000 b/d to gasoil demand (through LSMGO) and 120,000 b/d to fuel oil demand (through VLSFO). In reality, gasoil demand additions should be somewhat higher and fuel oil lower as VLSFO in itself is a hybrid fuel. While the extra demand from the LNG to conventional fuels switch is likely to be just over 6% of the growth expected in 2022 for gasoil, it is much higher in the case of fuel oil.

Figure 4 (below) shows Singapore delivered LSMGO, VLSFO and HSFO prices relative to Brent crude oil. While the LSMGO to Brent spread increased to the levels last seen before Covid-19, the HSFO spread decreased to the lowest in four years, excluding the short period of time during the IMO2020 when it was slightly lower still. Higher gasoil demand results in a wider gasoil spread to Brent pushing refineries to increase production. While it is often possible to slightly adjust refinery configuration to yield more gasoil, the increase in its output often comes with processing more crude oil. This in turn results in a higher fuel oil output which weighs on HSFO prices.

With the wider Hi5 spread, scrubber vessels stand to benefit. For example, scrubber fitted VLCCs have been earning almost double their non-scrubber fitted counterparts. This has helped prevent their owners from straying too far from breakeven levels.

Figure 5 (below) shows that in the 4 weeks of January 2022 VLCCs with scrubbers had an earnings advantage of between $5,000/day and $6,000/day with only a handful of weeks back in early 2020 when a winder Hi5 spread resulted in larger scrubber premiums. 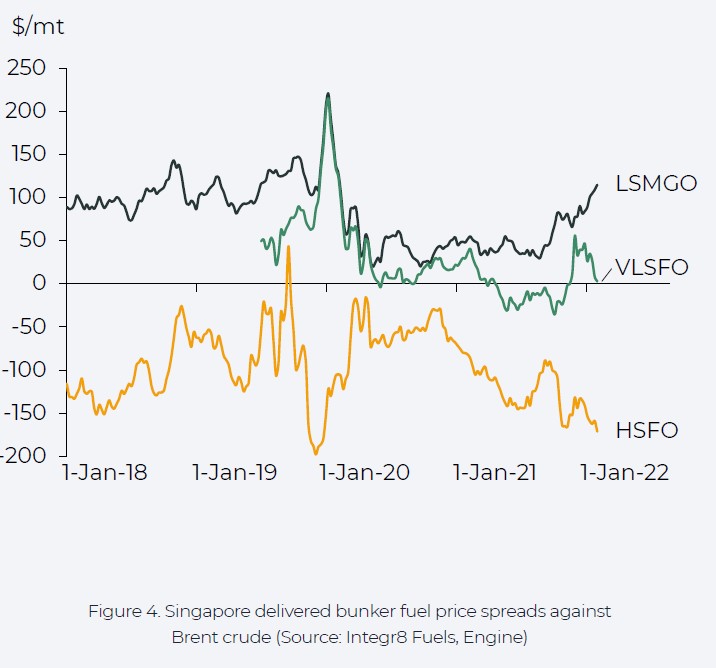 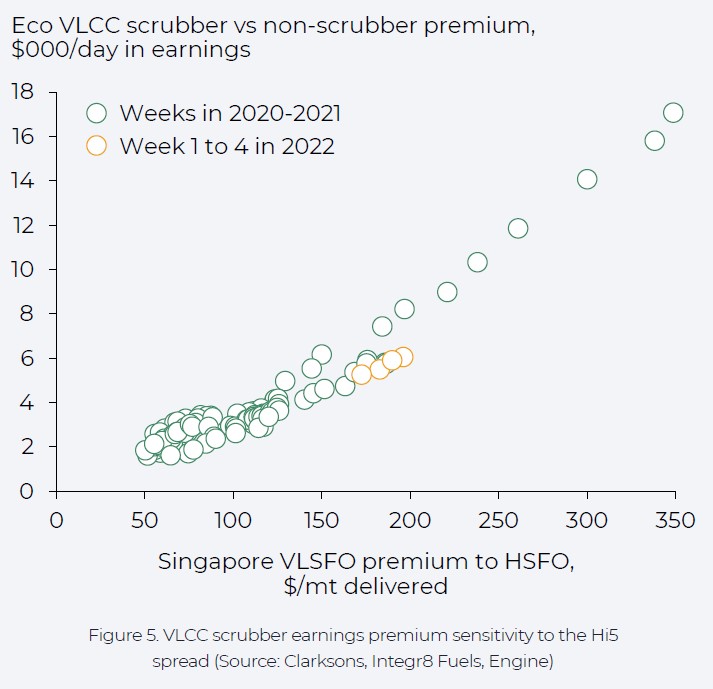 Where do we go from here?

While previously the global gas market had a stronger connection with oil, this link has been weaker recently. There are a number of factors that may affect both markets and the competitiveness of conventional fuels compared with LNG going forward. On one hand, unseasonably low gas inventories and the uncertainty surrounding the commissioning of a gas supply pipe from Russia to Germany provide support to gas prices. On the other hand, the expectation that OPEC and non-OPEC countries will continue increasing oil production may bring oil prices lower. If this is the case, we may continue to see interest from owners of LNG fleets to buy more conventional fuels than they normally do, particularly as the winter heating season in the Northern hemisphere is not just over yet.

Baleària invested USD 110 million in the vessel; it is equipped to monitor actual fuel consumption, engine efficiency and adjust navigation to optimise comfort.

At present, no crew and passengers are allowed to disembark in Singapore, crew change is not permitted, and all suspected COVID-19 cases will be tested.

Inatech built ‘ShiptechLite’ for small-to mid-size shipping companies weathering Covid-19 related disruptions but lacks the tools and resources to do so efficiently.