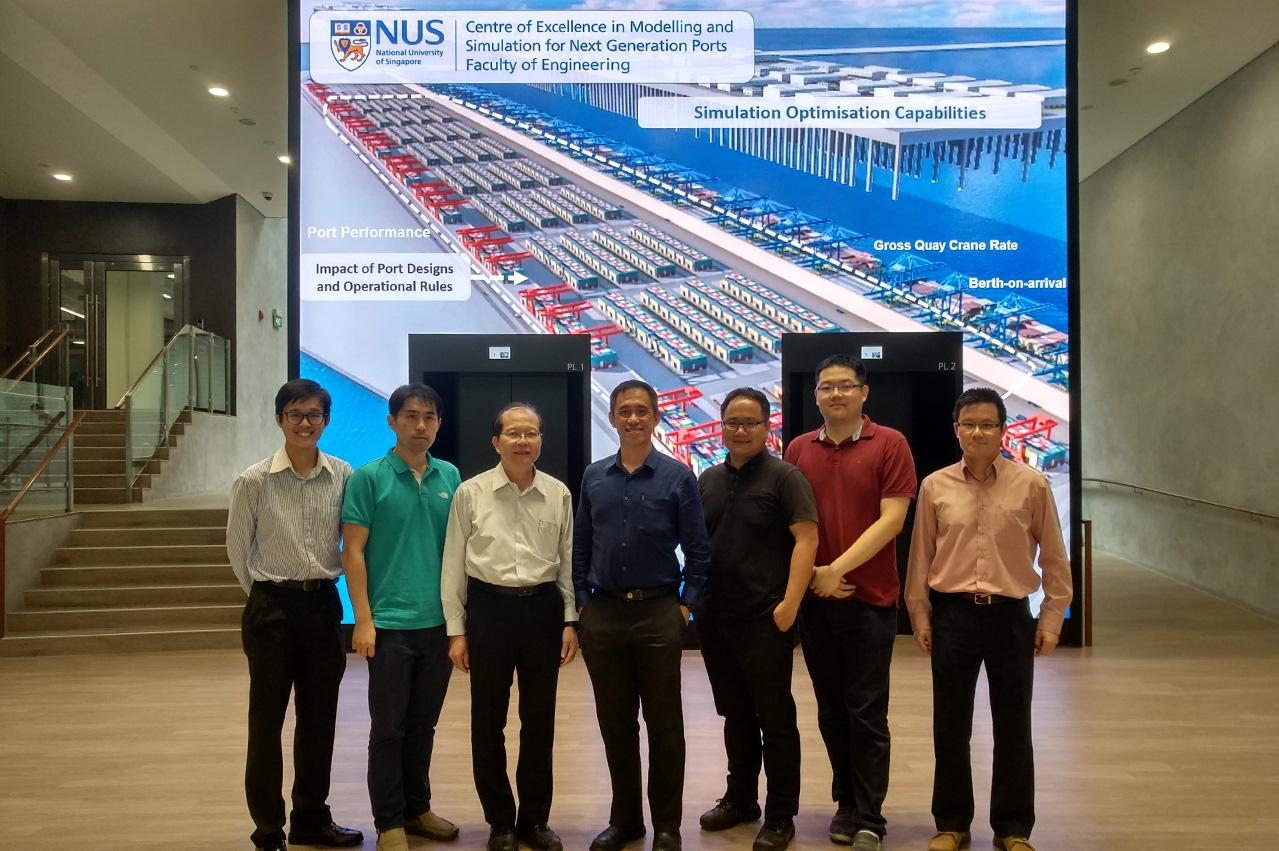 Today (Friday) marks the signing of an agreement between the National University of Singapore (NUS) and Singapore Maritime Institute (SMI) to establish the Centre of Excellence in Modelling and Simulation for Next Generation Port (C4NGP), a new SGD $18 million ($13.21 million) research centre located at NUS for enhancing the global competitiveness of Singapore’s maritime and port industries.

The Tuas mega port is a major milestone in Singapore’s next generation container terminal project that is scheduled to open progressively from 2021 for completion in 2040; it combines all city terminals at Tanjong Pagar, Pasir Panjang, Keppel and Brani into a mega maritime complex.

Professor Lee believes these simulations will offer PSA International, Jurong Port and other stakeholder companies of the Tuas mega port project a glimpse to forecast the efficiency of operational events even before construction.

“Imagine a crystal ball which allows you to see events unfolding,” he says while adding “it is like a scientific tool which commercial users can consult to make an educated guess before committing huge money.”

“Singapore’s Tuas mega port is going to be the biggest in the world and nothing of this scale has ever been done before. The challenge is not only building it, but also making sure the design of the whole port itself promotes effective operations.

“The volume of 65 million TEUs is going to introduce huge traffic in the terminal that will be complicated to handle; if you do not control the operational decisions and handling sequences wisely the capacity of the port will fall far below the projected capacity.

“Singapore, being a transhipment port, also means an incoming containership will likely contain boxes which has to be further processed and transhipped over 200 destinations, and with each finger at the Tuas port being a few kilometres long all AGVs will need to operate and transport their containers like clockwork to meet transfers on time.

“The massive amount of automation by AGVs means much work has to be done to fine tune the system’s artificial intelligence; a smart algorithm also needs to be developed to control how many AGVs simultaneously operates as we will see congestion with too many and a backlog if too few units operating.

“The simulations provided by our ‘digital twin’ project of the Tuas mega port will be able to help stakeholders make decisions on the mentioned and more.”

“There is none other like this in the world; the rest are simply simulation models, whereas NUS’ ‘digital twin’ model integrates advanced analytics and optimisations for arriving at conclusions to help stakeholders make commercial decisions,” highlights Professor Lee.

“Ours even allow adjustment of five hierarchical levels of detail, depending on user requirement, taking into account all the way down to the equipment component level.

“It is essentially a virtual sandbox image of the physical operations.

“In the long run, what we aim is to fully integrate the physical and digital aspects of the port operations at Tuas mega port by getting real time data from the physical world for feedback to the digital world so that both systems have mutual learning capabilities.”

C4NGP is part of the Sea Transport Industry Transformation Map (ITM) developed by the Maritime and Port Authority of Singapore (MPA) in partnership with the industry, unions and other government agencies to grow the sector’s value-add by SGD $4.5 billion and create more than 5,000 jobs by 2025.

As part of efforts to enhance productivity and innovation, Singapore is investing in new port capabilities that capitalise on emerging technologies to allow Tuas mega port to harnesses data analytics to optimise operations such as just-in-time vessel arrivals and the Maritime Single Window for quicker port clearance.

The AGVs have been introduced under a MPA-PSA Port Technology Research and Development Programme (PTRDP) to jointly step up R&D and capability developments in the areas of digitalisation, connected community systems as well as automation and robotics.

A fleet of 30 AGVs have been deployed in a trial with automated yard cranes and quay cranes in the Pasir Panjang Terminal.  Deployment of such automated systems are expected to be scaled up in the Tuas mega port.

The China Navigation Company looking at an initial investment of around $2.5 million for vessel.

By the end of 2021, a record of more than 240 million metric tonnes of marine fuel would have flowed through MFMs installed onboard Singapore bunker tankers; Manifold Times finds out why this is so.