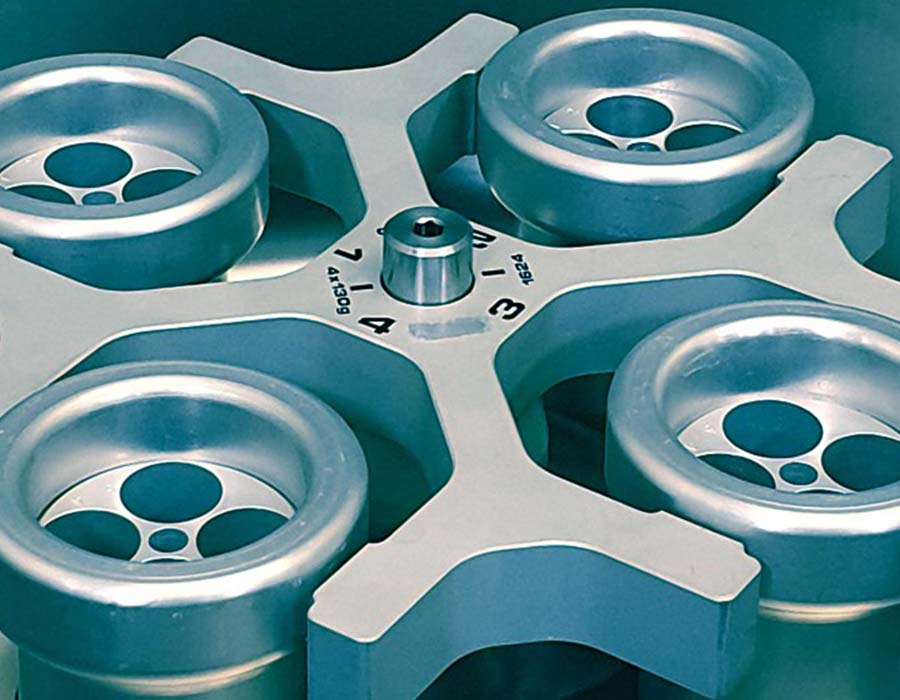 The stability issues being reported regarding the use of very low sulphur marine fuels are often related to the fuels’ shelf life, which makes it increasingly important to assess fuel quality over extended periods. Rob Ashton, Infineum Marine Fuel Additive Business Development Manager, explains how selecting the most appropriate combination of tests to evaluate stability and compatibility over time is increasingly important in order to offer the most complete protection for ship operators:

Since the introduction of the IMO 2020 sulphur cuts, the stability of very low sulphur fuel oils (VLSFO) at point of sale has largely been on specification. However, uncertainty around the shelf life of these fuels, which can be less than three months, means this remains one of the key areas of concern for VLSFO use. This has led Infineum to invest in the assessment of the various tests that are available to help operators to ensure the fuel they have on board is suitable for use.

In a previous Insight article Sediment concerns in marine fuels, we evaluated the Separability Number test (ASTM D7061), which measures the Reserve Stability Number and is being widely used to assess fuel oil stability and compatibility. Following a thorough study of this test we concluded that it is unsuitable for determining stability and compatibility of VLSFO over the fuels’ shelf life. While we understand the rationale for employing this test, in our view, the Separability Number test methodology eliminates the natural solvency of the fuel from the equation by saturating the fuel medium with polar aromatic solvent (toluene) at between 1:3 and 1:20 ratio. This means that the test analyses some characteristics of the asphaltene species contained within the fuel, but does not assess the stability of the fuel itself, which is the most critical factor for the new VLSFOs.

This is owing to the fact that most additives targeting asphaltene management show benefits in the Separability Number test at very low treat rates. There are some commercial additives that can trigger large improvement responses in this test but are unable to demonstrate any robust level of performance in other key test methodologies (e.g. Potential Total Sediment (TSP) and S ASTM D7157 value), even at elevated treat rates. It is questionable whether the low treat rates offered for the Separability Number test are giving any tangible benefit in ensuring VLSFOs are suitable for use on board ship.

Infineum has been evaluating various test methods to support the industry with a view to finding a new test method, which would better indicate the suitability of VLSFOs. Among the tests that have been evaluated is the Spin Test, which has been developed by Alfa Laval, a leading provider of fuel oil purifier equipment for the marine industry.

Other Spin Test methods, used for determining sediments and water and fuel oils are also available (e.g. ASTM D1796). However, these test methods generally require fuel dilution, which, once again, can impact the effect of the fuel’s natural solvency on results. One of the key attractions of the Alfa Laval test methodology is that fuel is unadulterated and is only subject to the forces likely to be experienced in ships’ purifier systems. Stokes law* is the underlying principle here.

The Alfa Laval test is carried out by heating the fuel to a defined temperature, dictated by the required viscosity of the fuel, spinning in a heated centrifuge at a fixed rpm for a fixed time period (read more). Once the test is complete, the centrifuge tubes are removed from the centrifuge and inverted so that the fuel oil drains out leaving the compacted sediment in the base of the tube. The fuel oil operability is evaluated by determining the quantity of sediment that has come out of solution from the fuel sample and settled within the centrifuge tube. The rating system is shown below:

A severe VLSFO was selected for testing, which was off-specification for Total Sediments Potential at 0.14 mass %, versus the maximum specifications in ISO 8217 of 0.1 mass %. The Spin Test yielded a value of 1.5% sludge volume. For this particular case, the result aligns with TSP, meaning that this fuel could cause onboard issues in the purifier system and its use should be avoided.

To assess the ability of the test to discriminate the effects of additive use, a sample of the fuel was treated with Infineum asphaltene management technology. A second sample was treated with another commercially available additive at the same treat rate, which was significantly above the supplier’s recommended treat rate.

On visual inspection, the Infineum technology delivered a clear benefit, demonstrating how effective the additive is at dispersing the asphaltenes. The Spin Test result of 0.1% sludge volume confirmed these initial observations. TSP was also carried out and a reduction from 0.14 mass % to 0.01 mass % was recorded, confirming that the fuel additised with Infineum technology would be suitable for use on board.

The competitor additive offered no TSP improvement and was unable to move the fuel into a safe operating window according to the Spin Test. This result reinforces the importance of verifying additive performance in a suitable test to ensure that an actual real-world operability benefit is bestowed by the additive in the fuel oil. A study was also undertaken to relate Spin Test performance back to a ship trial that had been carried out on a Suez Max tanker with a two-stroke engine – see case study. To recap, the fuel supplier had produced on-spec VLSFO (<0.1 mass % total sediment), which deteriorated rapidly on board ship to the point where the fuel was unusable (>0.23 mass % TSP) and had to be de-bunkered. An identical VLSFO blend was made with Infineum additive technology to give a TSP <0.04 mass %.

Samples of the components used to make the ship trial fuel had been retained and although they were 18 months older (and hence more severe in nature), it was decided to evaluate this test case in an extended Spin Test programme. Initially, TSP and Separability Number (RSN) testing were carried out over an eight-week period to assess the fuel’s performance.

At the start of the test, the VLSFO without additive was borderline off spec at 0.11 mass %, vs. <0.10 mass % in the original ship trial, but it rapidly deteriorated to 0.19 mass % after the four-week period. This level was maintained over the eight-week test period, compared with the deterioration in TSP to 0.23 mass % during use in the original ship trial blend. By comparison, the Separability Number test yielded a high stability reserve (RSN <<1) indicating that it would remain suitable for use over the whole test period, which it clearly did not. 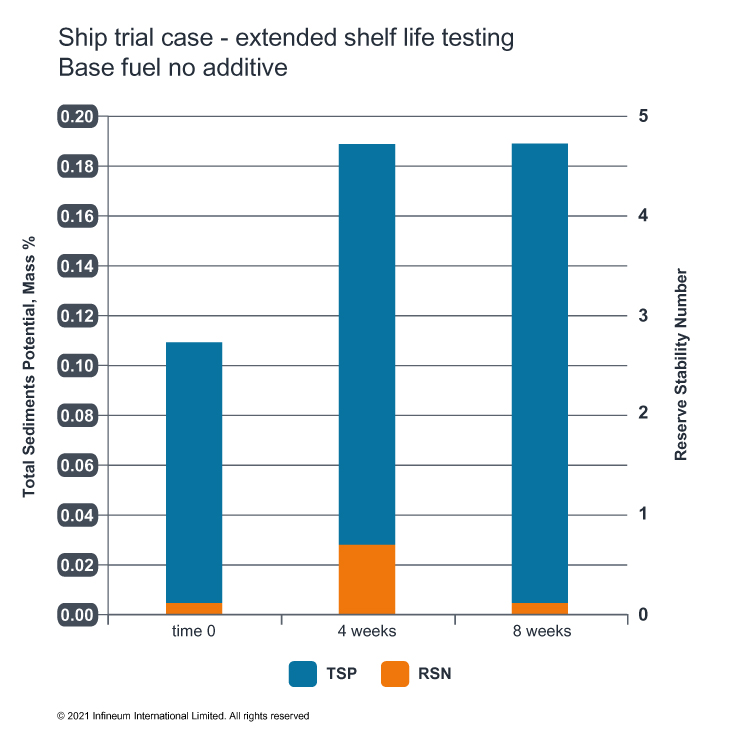 When the VLSFO was treated with Infineum technology, it greatly improved the TSP at the start of the test down to a level of 0.04 mass % which mirrored the original ship trial result. 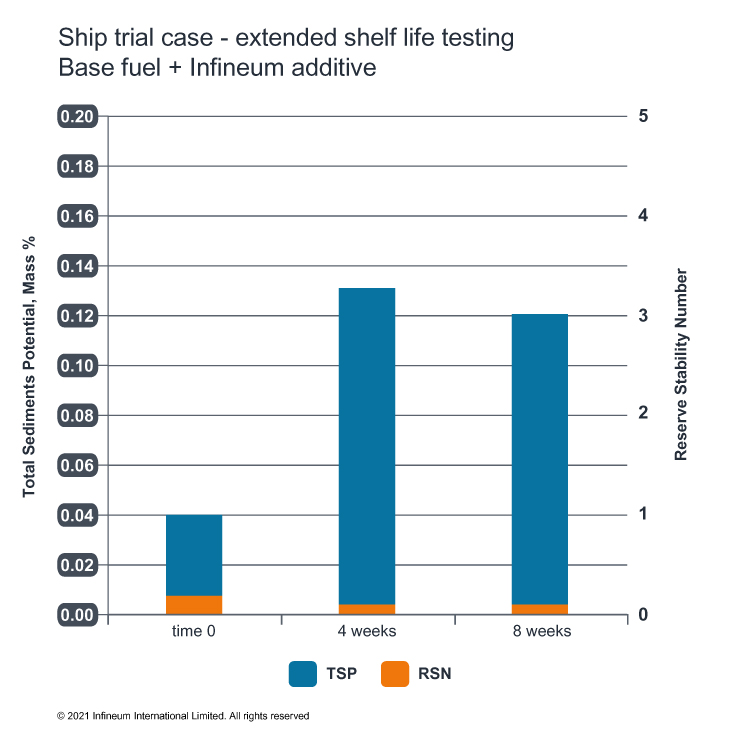 After four weeks, the treated VLSFO drifted off spec for TSP (0.13 mass %) albeit to a lower level than observed in the unadditised samples. It then maintained that slightly off-spec level over the eight-week period, whereas in the original field trial TSP was maintained at 0.04 mass % throughout the 15-week ship trial. Again, Separability Number returned a high stability reserve (RSN <<1) despite the fuel being off spec for TSP.

The TSP/RSN protocol above was repeated with the Spin Test, this time over a 10-week period. 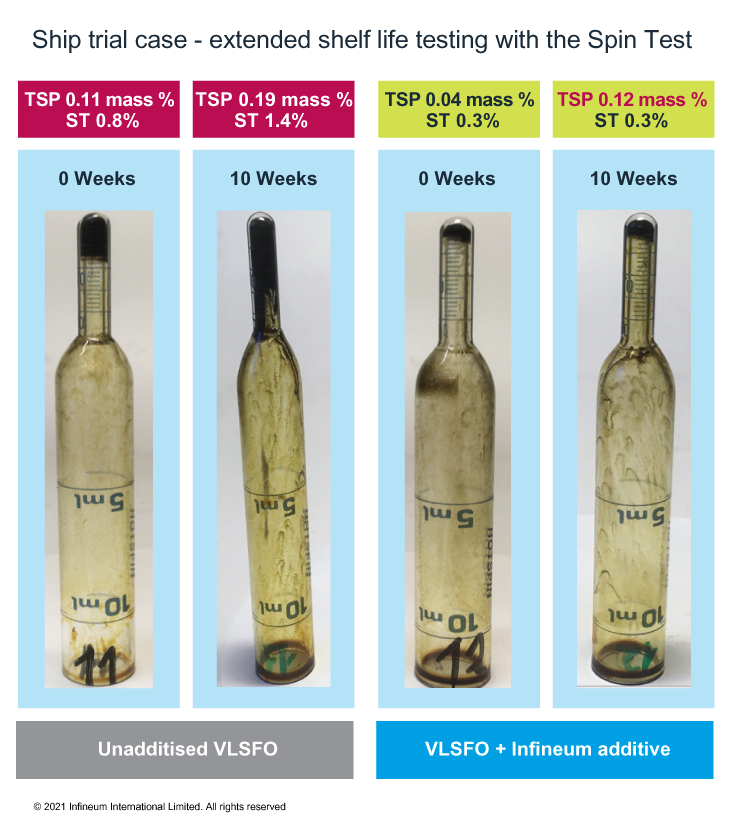 According to Spin Test data, the base fuel was deemed unfit for use at the start of the test (0.8% sediment) with further deterioration over the 10-week time period to 1.4% sediment. This is aligned with the TSP results.

Infineum additive technology maintained the fuel below the unfit for purpose level according to the sludge level in the Spin Test (0.3%) over the whole time period despite being borderline off spec for TSP (0.12 mass %) after the 10-week period.

This test programme builds on Infineum’s previous field experience, demonstrating that the Spin Test gives further supporting information, in addition to the Total Sediments test, that enables ship operators to assess the suitability for use of VLSFOs over an extended timeframe. It could be said that the TSP test is a low shear test environment for the fuel, similar to that experienced in storage conditions on board. However, the Spin Test is a higher shear environment (centrifugal force) mimicking purifier operation, which assesses whether sediment will precipitate from a residual fuel while passing through the fuel purifier. Both tests measure different, but relevant, stress factors that fuels experience in storage and purification and consequently offer a more comprehensive picture of how a fuel will perform on board.

The TSP test, which is the existing reference test in ISO 8217 for assessing sediment, does have issues with repeatability, especially in fuels that have high results or where the performance changes over time. Regardless of this fact, it is crucial that any tests used should provide confidence in operability protection to ship operators. In this regard, the Alfa Laval Spin Test performance translates directly into improved purifier operation for ship operators. Consequently, Infineum believes that a combination of TSP and the Spin Test, coupled with effective asphaltene management additives offer the most complete protection for ship operators.

North P&I: Tight Time Bars in the US for Bad Bunkers

Buyers may wish to consider placing seller on notice of potential claims arising due to fuel issues.

Samples were all VSLFO fuels and TSP results ranged up to 0.35% m/m; ships bunkering at these ports should request additional supplier reassurance, it said.