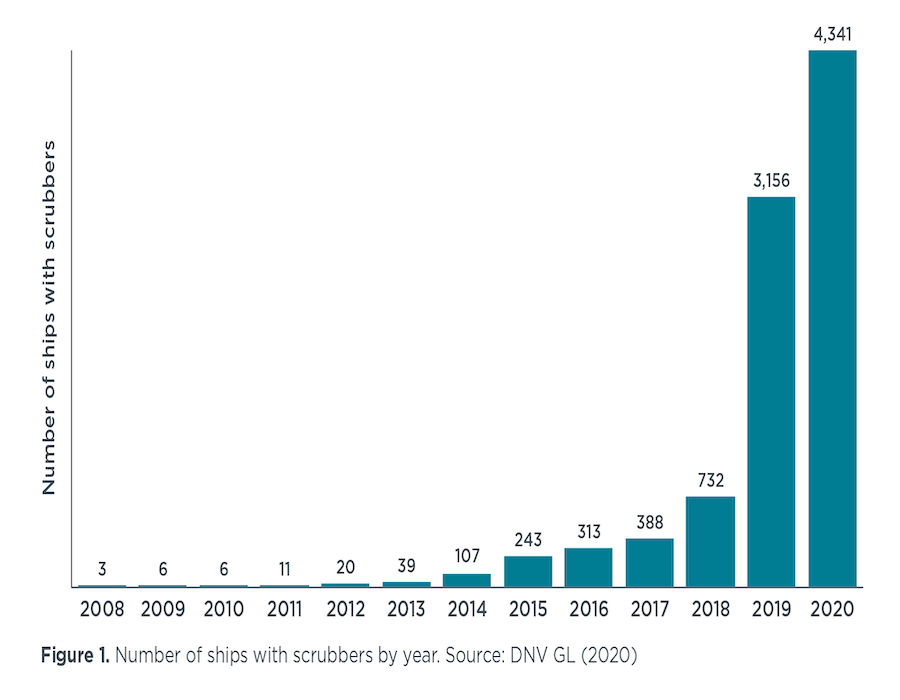 The International Council on Clean Transportation (ICCT) on Tuesday (24 November) published its study Air emissions and water pollution discharges from ships with scrubbers.

The study noted the number of ships using exhaust gas cleaning systems, better known as “scrubbers,” has grown from just three ships in 2008 to more than 4,300 in 2020.

The study acknowledges scrubbers are effective at reducing air emissions of sulfur dioxide (SO2), however the sulfur and other contaminants removed from the exhaust gas—including carcinogens such as polycyclic aromatic hydrocarbons (PAHs) and heavy metals—are dumped overboard in the form of washwater, also called discharge water.

Meanwhile, the International Maritime Organization’s (IMO) guidelines for scrubber discharges have not been strengthened since 2008, despite being reviewed in 2009, 2015, and 2020, and the guidelines ignore the cumulative effects of many ships operating and discharging in heavily trafficked areas.

Such cumulative effects are to be expected given the rapid increase in the number of ships with scrubbers, said ICCT.

The study estimates air and water emission factors for ships using heavy fuel oil (HFO) with scrubbers based on the available literature and the methods of the Fourth IMO Greenhouse Gas Study.

Regarding water emissions, the study finds:

Given these findings, the ICCT said it recommends that individual governments continue to take unilateral action to restrict or prohibit scrubber discharges from both open-loop and closed-loop systems.

This could include an immediate prohibition on scrubber discharges in ports, internal waters, and territorial seas.

Internationally, the IMO should consider prohibiting the use of scrubbers on newbuild ships and phasing out scrubbers on existing ships, because scrubbers are not equivalently effective at reducing air pollution compared to using lower sulfur fuels.

A full copy of the study Air emissions and water pollution discharges from ships with scrubbers is available here.

PGT: Important issues for owners to consider when buying a gas scrubber

Scrubber technology firm advises owners to consider the particular profile and route of a vessel when selecting scrubbers, despite obvious cost benefits accrued.

The notice published in the Marshall Islands Registry suggests for shipowners to utilise other options such as low sulphur bunker fuel when entering NZ waters.