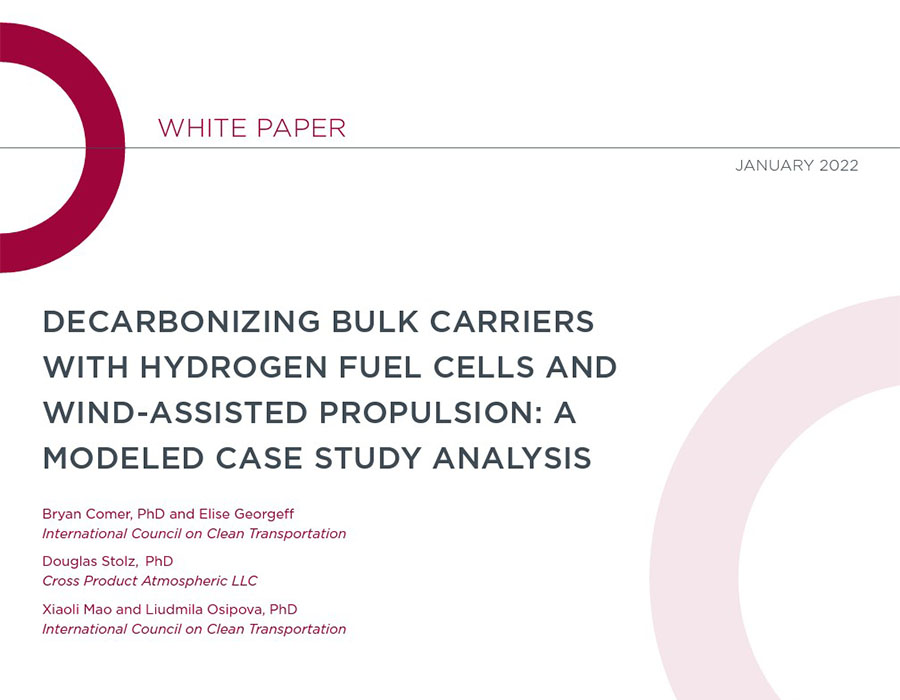 ICCT research has demonstrated both the potential for liquid hydrogen (LH2) fuel cells to replace fossil fuels for container ships on the transpacific corridor and the energy-saving and emissions-reduction potential of rotor sails, it states.

These two technologies could be combined to create zero-emission vessels (ZEVs), and bulk carriers could be particularly well suited because they are more likely to have enough space onboard for the fuel cell and hydrogen fuel storage systems and enough deck space for installing or retrofitting rotor sails.

The authors used 2019 Automatic Identification System (AIS) ship traffic data and weather data observations to estimate the ships’ total energy use and the energy-saving potential of rotor sails for two routes for each ship.

As shown in the figure below, the two larger ships could complete both of their modeled routes using LH2, even without the help of wind-assisted propulsion. The smallest bulk carrier does not have as much space available for LH2, and that makes it relatively more challenging for this ship. Still, results show additional legs could be achieved for the smallest ship by using rotor sails in combination with LH2, and for the two longest legs, by replacing 2.4% of its cargo space with LH2 in combination with four rotor sails. In summary, the paper found rotor sails can reduce the amount of fuel that ships consume and can be retrofitted on existing conventionally fuelled ships to reduce fossil fuel consumption. They can also be installed on new ships, including hybrids and ZEVs, to save on energy costs.

Note: The full whitepaper Decarbonizing bulk carriers with hydrogen fuel cells and wind-assisted propulsion: A modeled case study analysis can be downloaded from the link here.

The plug-in hybrid vessel features a battery pack weighing 65 tonnes that can be recharged in one hour.