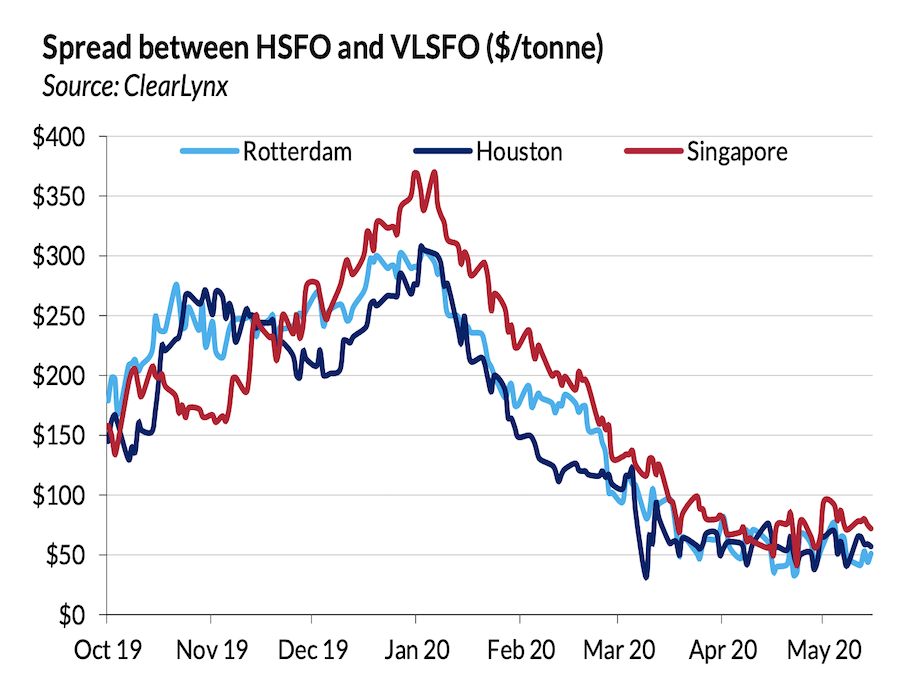 International shipping broker EA Gibson Shipbrokers Ltd.on Monday (18 May) published a report analysing the impact of the collapse in oil prices on the scrubber technology market and forecasting possible strategies adopted by shipowners:

In recent weeks, several publicly listed tanker companies announced their decisions to postpone scrubber installations. During the release of their 1st quarter financial results, DHT Holdings said it would postpone installation of five scrubbers, citing strong market conditions as the reason. A similar statement was made by International Seaways. According to Platts, the company has postponed three planned installations to coincide with scheduled dry docking in 2021. Finally, Scorpio Tankers said it will delay the installation of nineteen scrubber retrofits until at least 2021, while Scorpio Bulkers announced its decision to delay the installation of thirteen scrubbers. These developments follow several scrubber cancellations (by independent owners) scheduled to take place in the 4th quarter of last year, with owners instead opting to take advantage of the strong tanker market at the time.

However, there has been no mention of a dramatic decline in bunker prices and lower spreads between very low sulphur fuel oil (VLSFO) and high sulphur fuel oil (HSFO) in recent public statements. The Covid-19 driven collapse in oil demand saw the differential between the two bunker fuels fall as low as $50-$60/tonne in April and April, compared to around $275-$300/tonne spread back in January 2020. As a result, the premium in spot earnings for scrubber equipped vessels declined substantially. Using TD3C as a guide, scrubber equipped VLCCs on average earned just $4,000/day more in April than tankers without scrubbers. This is compared to a premium of $16,000/day just a few months ago.

Due to these adverse market conditions, it is not surprising that there has been considerably less appetite for new scrubber installations. Wartsila announced a decline in new marine orders, largely due to a lack of scrubber investments. A similar trend has been confirmed by the classification society DNV GL, which also reported a slowdown in scrubber orders during the 1st three months of the year.

The economics of a scrubber retrofit have certainly been impacted by narrower spreads. At a $60/tonne differential between the two bunker fuels, the repayment period of an investment in an open loop VLCC scrubber retrofit is expected to be somewhere between 3 to 4 years, depending on the fuel efficiency of a tanker. The repayment period is shorter if the technology is installed on a newbuild due to lower installation costs and no offhire time. However, even here it would still take somewhere between 18 to 26 months to repay the investment.

Yet, the picture could change again in the future. Oil prices are expected to rebound once the world recovers from Covid-19, whilst OPEC+ is likely to continue its efforts to support oil prices. Further down the line, the upward pressure on oil prices could also intensify due to the major reductions in CAPEX by oil companies seen at present. With this in mind, investment in exhaust gas cleaning technology could come back on the agenda. Expectation of higher prices in years to come is perhaps one of the reasons why delays to scrubber installations and not outright cancellations are currently the preferred strategy of tanker owners.

Ibo celebrates his 10th anniversary with Dan-Bunkering this year.