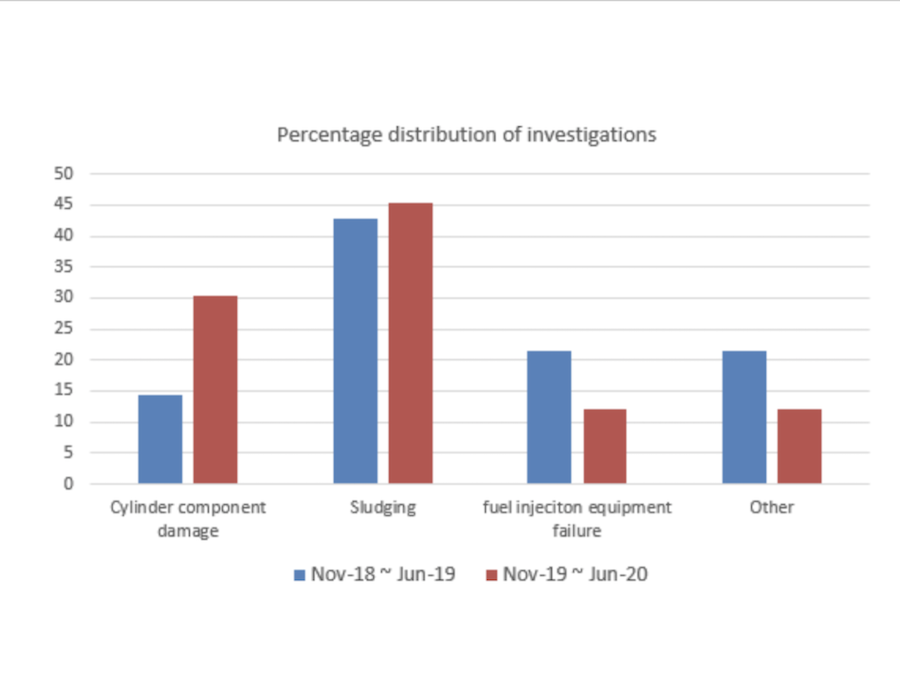 Lloyd’s Register Fuel Oil Bunkering Analysis and Advisory Service (FOBAS) on Monday (21 September) published a bulletin outlining possible reasons behind the rise in combustion related incidents resulting in cylinder liner damages of large two-stroke engines, as well as some advice on how to navigate the situation:

Issue of Excessive Cylinder Component Wear on Large Two-Stroke Engines During the Use of 0.50% Sulphur Fuels

Fuel combustion in an engine is a complex chemical/physical reaction and has been an area of intense research over the years. Inconsistency in composition of residual marine fuels makes it even more difficult to predict. Larger engines, especially two-stroke designs, have enabled ships to burn a wide variety of residual fuels. Since the implementation of MARPOL Annex VI regulation 14.1.3 from 1st January 2020, FOBAS have seen an upsurge in combustion related incidents resulting in cylinder liner damages of large two-stroke engines. These particular incidents started to appear around November 2019 when majority of the world fleet started transitioning from high sulphur fuel oil (HSFO– max 3.5%) to very low sulphur fuels (VLSFO – max 0.50%).

Figure 1 above compares the FOBAS data for eight months (November to June) for the last two consecutive periods. The reported failure modes have been divided into four main categories i.e. sludging, fuel injection equipment failure, cylinder component damage and others.

damage cases seem to have only been reported on large two-stroke main engines during VLSFO consumption. Though since March 2020, FOBAS has observed a downward trend in ships reporting cylinder component damage problems.

There could be several ways the failure could occur on two-stroke engine cylinder components, but it usually starts off with the excessive wear and then manifest itself into conditions such as blow by, scavenge fire, high liner and exhaust temperatures, low power output, excessive vibration, surging of turbocharger and so forth. The following diagram provides the basic wear types and corresponding key description. 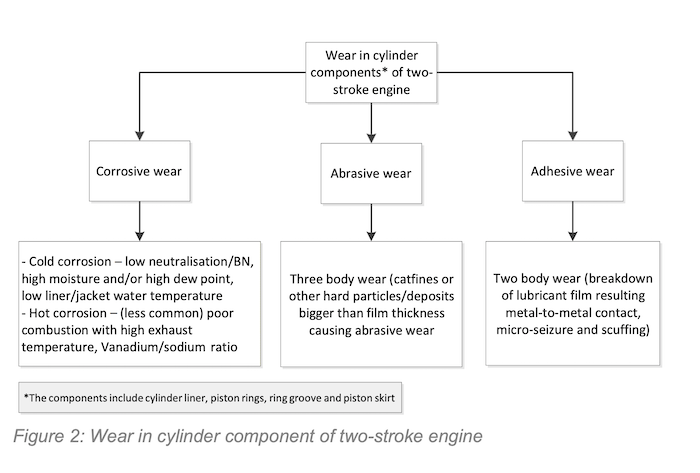 During the high sulphur fuels oil (HSFO) consumption, the two-stroke engines were frequently subjected to corrosive wear also known as ‘cold’ corrosion. Abrasive wear was also not uncommon due to HSFO containing higher concentration of catfines (Aluminium + Silicon) and other sediments making its way to engine inlet due to unsatisfactory fuel management. Ships switching to lower (0.50%) sulphur fuels which were less likely to cause cold corrosion (low acid-neutralisation requirement) and contain relatively lower concentrations of catfines. Though ships still reported excessive wear which is most likely to be associated with the third type i.e. adhesive wear where metal to metal contact takes place resulting in micro-seizure and scuffing.

FOBAS was asked to investigate those incidents and whether VLSFO quality is a contributory factor. The suspected fuels were tested for standard ISO 8217 (table 2) parameters and results were satisfactory. Further testing options in cases where a ship only reported damages to cylinder components are limited. If standard parameters results are satisfactory then FIA (Fuel Ignition Analyser) test is recommended to evaluate the fuels ignition characteristics. Some of these suspected VLSFO fuels were tested and key parameters are compared against the standard HSFO in figure 3. 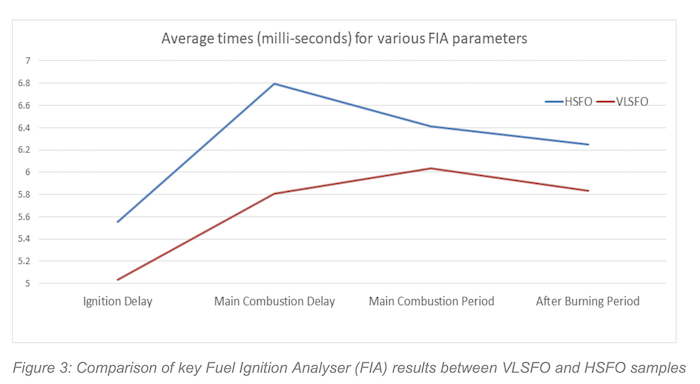 Above results from FOBAS data indicate that VLSFO has seen on average around 10% improvement on various ignition parameters compared to the HSFO. Although FOBAS tested a couple samples which showed relatively poor ignition quality one from Santos, Brazil and another one from Houston, USA with estimated cetane number (ECN) of just below 10. The FIA results from Houston seems to be an exception rather than the rule however Santos fuels are known for low ECN in the past.

Nevertheless, considering the robustness of large two-stroke engines in burning fuels with varying ignition qualities and in view of CIMAC guidelines, it is not straight forward to link the fuel quality with the reported issues. Further information received from the ships reporting these problems were studied and following observations were made;

– Other operational parameters such as scavenge air temperature, pressures, appear to be satisfactory for corresponding operating conditions

The information received from the ships in most cases were insufficient to draw conclusions considering (ISO 8217) analysis performed on the suspect fuel samples were mostly satisfactory.

However, based on our extensive experience of dealing such investigations, following are few observations;

As mentioned in above paragraphs, the frequency of such incidents are on the decline with ships making necessary operational adjustments and getting more experience of burning VLSFO in their engines. At FOBAS, we welcome our customers to report any fuel related incident to help the onboard engineers overcome the problem.

In cases such as damage to cylinder liner and piston rings, it is important to seek guidance from the engine manufacturers. Moreover, ship operators should refer to their engine operations manual, consult the latest service letters and also apply a best practice approach to mitigate and avoid future occurrences.

In light of varying fuel quality VLSFOs, the use of appropriate condition monitoring tools could further reduce the risk of breakdown scenario through diagnostic capability of picking up any incipient failure. FOBAS also provides lube oil analysis and for more comprehensive engine condition monitoring our