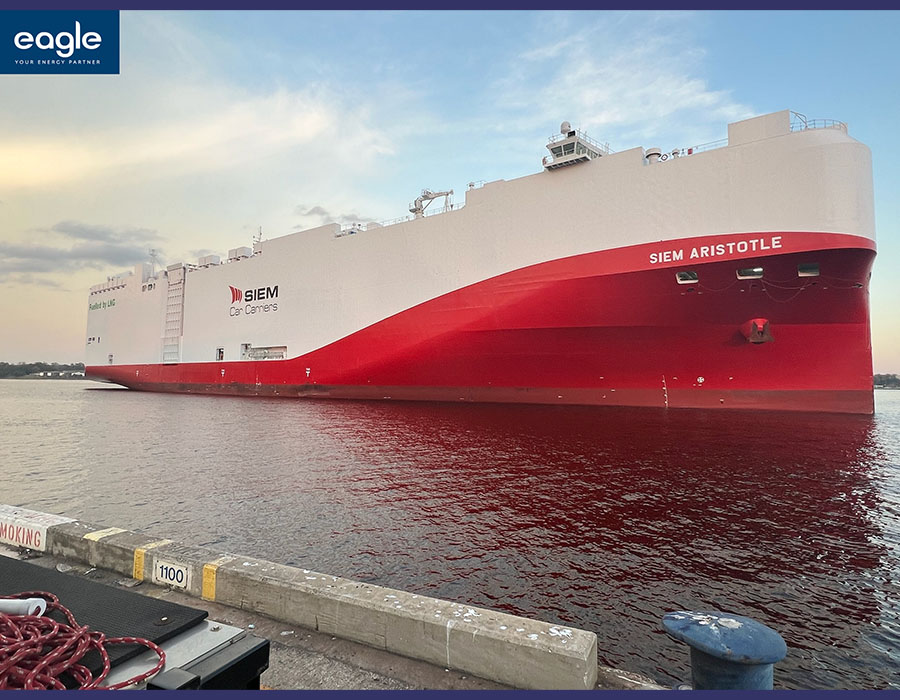 Eagle LNG marked a series of firsts when it fuelled the 7,500-car carrier SIEM Aristotle from its Talleyrand LNG Bunker Station at the Jacksonville Port Authority (JAXPORT) in Jacksonville, Florida.

The 7,500-car vessel and its sister ship, SIEM Confucius, are on a dedicated service to Volkswagen Group Logistics, transporting Volkswagen Group Services’ vehicles inter-coastally between Emden in Germany, the United States’ East and Gulf Coasts and Mexico. SIEM is the deep-sea pioneer in the use of LNG to reduce carbon emissions and the environmental footprint in the automotive logistics chain.

On this voyage, the SIEM Aristotle navigated upriver to the Talleyrand Terminal utilising the skill of JAXPORT’s pilots and tugs ensuring it safely passed under the Dames Point Bridge.

As this was the first time SIEM had fuelled at the facility, the U.S. Coast Guard inspected the ship and shoreside compatibility to ensure that the operation was conducted safely and smoothly.

Crucial to the success of the operation were the skilled and dedicated marine professionals in Jacksonville, including Eagle LNG’s operators and various port staff.

“We are delighted to partner with other pioneers in the move to LNG as a marine fuel. The move to reduce emissions while providing world-class service speaks well of the supply and logistics chain that includes Volkswagen, Eagle LNG, Crowley and JAXPORT — all of whom are committing significant resources in the transition to cleaner fuels.” The reputation of Jacksonville and JAXPORT as a vital LNG bunkering hub continues to grow in importance as additional LNG bunkering options develop while creating an anchor Port for other locations along the U.S. East Coast.

JAXPORT is one of the nation’s top vehicle-handling ports and the only U.S. East Coast port offering on-dock and near dock LNG fueling.

“This milestone is another evolution in the growth of Jacksonville’s LNG capabilities,” reports Eric Green, JAXPORT Chief Executive Officer.

“Our JAXPORT partners have invested more than a billion dollars in LNG advancements throughout the region, making Jacksonville well-positioned to serve the growing clean fuel needs of our customers around the globe.”

2nd Reconnaissance Group inspected the wooden-hulled ship “KG 91283 TS” on July 2 and found no documents proving the origin of the cargo.

European Federation for Transport and Environment calls on cruise company to commit to using cleaner fuel.

Biofuel used for the sea trial was made from biomass, and can be used without changing the specifications of conventional diesel-powered marine engines.

‘The market outlook for the next 10 years is exponentially strong, and CRYO is targeting a lead position in the disruptive marine energy market,’ said CEO.