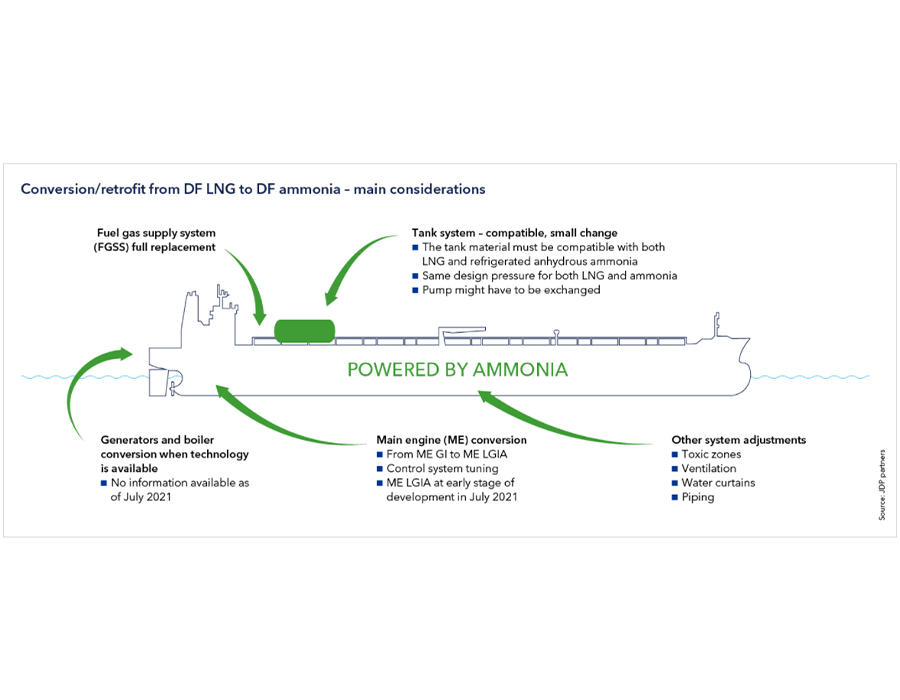 The JIP investigated the rationale of ammonia as a future bunker fuel for a new liquefied natural gas (LNG) dual-fuel VLCC tanker design and the business cases for converting the vessel to ammonia while comparing it to other alternatives.

It analysed a very large crude carrier (VLCC) design assumed to be operating on a Middle East to Far East Asia route at a speed of 13 knots. The ship was assumed to begin operating in 2024 with a 20-year lifespan.

The study found design arrangements for an ammonia-ready newbuild must account for both LNG and ammonia.

For example, ammonia requires larger tanks to achieve the same level of autonomy – which has implications for the superstructure – and a stronger support structure underneath.

Other design properties, such as tank and piping materials, should be chosen with a potential retrofit for ammonia in mind.

Further, it noted the bunkering strategy of the vessel must be reassessed as the energy density of ammonia is considerably lower than that of LNG, almost half in terms of volume.

In summary, the research concluded additional costs to enable the VLCC to run on LNG (rather than conventional fuel oil) were about USD 20 million.

On top of this, an additional estimated USD 2 million was needed at the newbuilding stage to make the vessel ready for a future retrofit to ammonia.

In the study, the most cost-effective compliance strategy in all cases was to operate on LNG with increasing amounts of bio-LNG blended in.

“There is a way towards 2050, but the ‘right’ direction is very ship- and trade-specific, and a range of assumptions need to be established,” it concludes.

Editor’s note: A slideshow with more details of the JIP, including business cases, total cost of ownership, and more, is available for download here.

The Methanol Institute and DNV GL aims to provide shipowners with the information they need to make decisions about adoption of methanol as a viable bunker fuel.

Enters second order for WinGD engines following a similar contract for four X92DF2.0 engines for a series of 14,000 TEU vessels earlier in the year.

‘We need very much the support of many other industries around us in order to make this transition happen and in order also to bring down the costs of those alternative fuels,’ says Peter Sand.