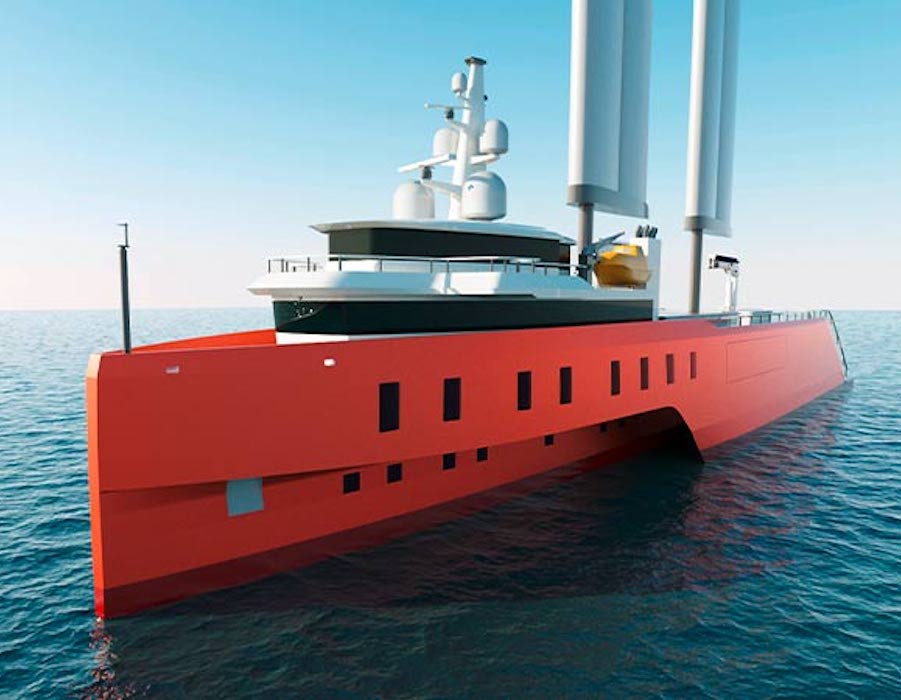 Classification society DNV GL has published an article analysing technological advancements made in wind propulsion for commercial shipping as well as the various applications available for adaptation to different shipping routes:

Wind has never been entirely dead. But now that we have realized the ecological consequences of burning fossil fuels, and IMO has imposed binding international emission restrictions, wind-assisted shipping is attracting attention again. Two French companies have shown how to use aerospace technology to double the propulsion power of wind.

The physical principle is the same one humans have used on sailing boats since eons ago: the wind hits the leading edge of the sail and splits into two flows which are redirected and travel at different speeds towards the trailing edge, causing a pressure difference that simultaneously pulls and pushes the sail and the craft forward. What has changed is the efficiency. Advanced science has doubled the amount of propulsion power per square metre of sail surface, says Marc Van Peteghem, naval architect and co-founder of VPLP Design. Together with the French engineering firm CNIM, VPLP has developed a new wing sail concept they call OceanWings, based on an existing VPLP idea.

From plane to ship

In recent years a number of attempts have been made to combine the propulsion principle of traditional sailing boats with the aerodynamic efficiency of an aeroplane wing with the trailing edge flap extended for starting or landing. “There is a slot between the two elements of the wing, and the air going through the slot accelerates the flow and pushes the turbulence towards the trailing edge”, explains Van Peteghem. While in the case of an aeroplane, the thrust created by the engine moves the craft against the air, causing the airflow to divide at the wings and generate the uplift force, the principle is reversed in the case of a sailing boat: the wind hits the sail rather than the sail being pushed against the wind. The physics is the same, however. Transferring the two-part concept of the plane wing and flap to a sailing boat results in a wing sail, which consists of two vertical, more or less symmetric, parallel “blades” or “wings” with a narrow gap between them. The gap splits and redirects the airflow again, reinforcing the aerodynamic effect and producing an additional thrust.

The concept has been the subject of various experimental designs for some time, including inflatable as well as rigid or segmented hard-shell prototypes. While significant efficiency improvements have been achieved, controlling and reefing the sail has been complicated, requiring exceptional skill and experience.

The OceanWings design takes a slightly different approach: each of the two straight blades has a mast of its own and consists of several horizontal segments, the “body” of each segment formed by a flexible fabric. Raising or lowering these segments along the mast allows the surface of the sail to be increased or reduced, or “reefed”, and lowering all segments to the lowermost position “furls” the sail entirely. The angle between the two parts of the sail can be adjusted as desired; each blade can rotate 360 degrees around its mast.

The second key element of the OceanWings concept is that the complications associated with finding the proper position for the given wind condition and desired direction of travel is eliminated because the entire wing sail is fully computer controlled. All the operator needs to do is choose the heading, and the computer will position the two parts of the sail to achieve optimum thrust, adjusting the camber and twist as required. The sail has been tested successfully on VPLP yachts, including the hydrogen fuel-cell co-powered catamaran Energy Observer launched in 2017, and is commercially available. According to Marc Van Peteghem, OceanWings sails can reduce fuel consumption by 18 to 42 per cent, depending on ship type, route and sail arrangement.

But VPLP has far more ambitious goals than yachting. “It is time to transfer the technology we have developed in the yachting industry to the shipping industry”, says Van Peteghem. His company advertises its OceanWings wind propulsion technology as an auxiliary source of propulsion power for merchant ships to help achieve the desired EEDI. Looking further into the future, hybrid vessels combining an eco-friendly engine fuel with wing sails and solar panels on board could one day be an option for GHG-neutral, sustainable shipping. Of course, not every sea route has the right wind conditions for such a solution, but on those routes that do, taking advantage of the wind as an inexhaustible energy source certainly makes ecological and economic sense.

“A wing sail could be installed on any ship where it is freely exposed to the wind,” says Van Peteghem. Once a new wind propulsion concept enters the commercial stage, it is the responsibility of class to ensure the system is safe and reliable, he adds.

DNV GL certainly has the required expertise and engineering know-how in this field, says Hasso Hoffmeister, Senior Principal Engineer at DNV GL. “Among the advantages of a wing sail is that its three-dimensional cross section improves its aerodynamic efficiency compared with a conventional sail. Therefore it achieves considerably more thrust per square metre of sail surface area.” On the other hand, the forces acting on any sail not only push in the forward direction but also sideways, which means the stability of the ship must be considered when sizing the sail surface area. “But sails intended to provide auxiliary propulsion on a large merchant vessel would typically be small enough to avoid any negative impact on stability,” says Hoffmeister. “Depending on the relative dominance of a sail system and whether it is a new design or a retrofit, a ship design may be worth optimizing for wind propulsion efficiency.” An example is Dykstra Naval Architects’ proposed sailing cargo ship concept “WASP”, designed for a very large sail surface and therefore with an appropriate hull form. A DNV GL certification standard for such ships has been published in November 2019, called DNVGL-ST 0511 ‘Wind assisted Propulsion Systems’.

Projects like the recent successful rotor sail installations by the MariGreen consortium and Norsepower, both with DNV GL certification, as well as OceanWings and other sail types have delivered encouraging results. To support these efforts DNV GL also published its new class notation ‘Wind assisted propulsion systems’ in 2019. What the industry needs now is substantial capital investments in these proven wind technologies so they can enter the mainstream and unfold their carbon abatement and fuel-saving potential.

DNV GL currently offers three services relevant for wind propulsion systems. Its independent maritime advisory network has unique expertise in calculating the amount of auxiliary propulsion power or fuel savings specific wind systems will generate on a specific ship on a given route. This is done using simulations and route-specific weather statistics, and the results for various sail systems can be compared to determine the most efficient one. The second service is EEDI calculation for a given hybrid propulsion configuration; including wind assistance in this calculation is expressly permissible under IMO statutes, Hasso Hoffmeister stresses. The third service is the new class notation involving technical certification and approval of the safety, structural stability and resilience under extreme conditions of a ship using auxiliary sails. This procedure is based on class rules and includes control and monitoring systems as well as the integration of the sail system into the ship. “The technology is there, and we offer the necessary independent advisory and approval services,” says Hoffmeister. “It is up to the shipping industry to seize these opportunities.”

Addition of MPA and Yara means the alliance, first unveiled in January 2020, now has a complete representation from all areas of the maritime ecosystem.

Bunker tanker is the first of two all-electric vessels to be built from the e5 Lab initiative and is expected to go into service in bunkering operations in Tokyo Bay by 2022.

Trial will take place on board the 37,000 DWT chemical tanker Stolt Inspiration as she sails from Rotterdam, the Netherlands to Houston, US.