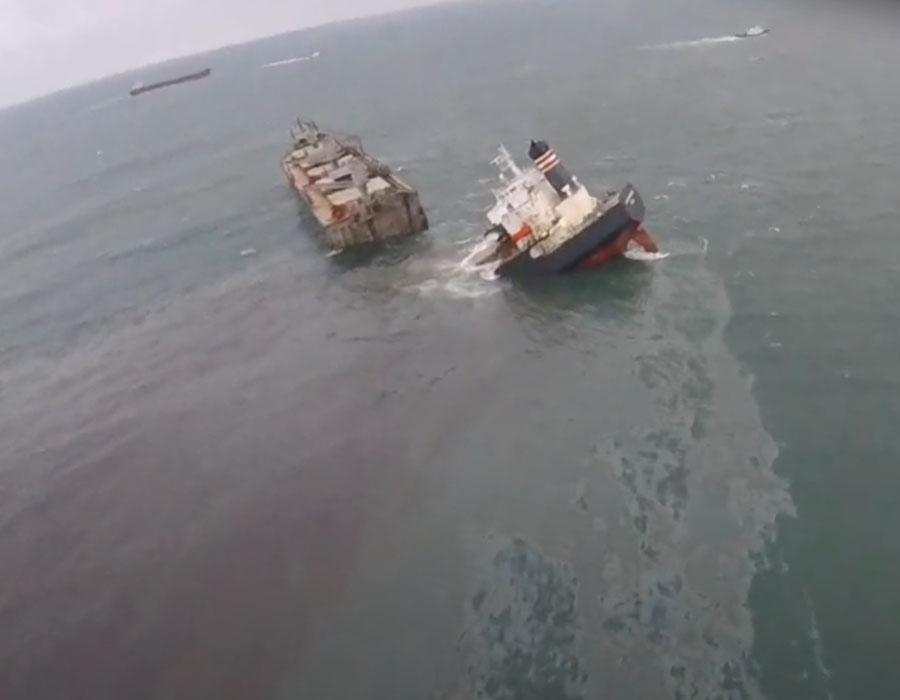 The wood-ship carrier Crimson Polaris chartered by NYK from shipowner MI-DAS Line SA (an affiliate of Doun Kisen Co., Ltd.) has broken into two since running aground off Hachinohe on Wednesday (11 August).

An update from NYK informed the oil spill began after the vessel’s hull split into two pieces on 12 August at 4:15 a.m. (JST).

The ship had about 1,550 metric tonnes (mt) of heavy oil and about 130 mt of diesel oil as bunker fuel before running aground. The amount of oil that has been spilled into the ocean has not been identified.

“A crack that initially occurred between the No. 5 cargo hold and the No. 6 cargo hold at the rear of the vessel worsened, and the hull eventually split into two,” explained NYK.

“The bow is floating and held by an anchor chain, and the stern appears to have become stranded on the seabed.

“The shipowner and ship-management company are currently in discussions with relevant authorities and salvage companies concerning towing and treatment of the separated hull, with the prevention of environmental pollution being given the highest priority. We are carefully monitoring the situation.”

According to NYK, the Maritime Disaster Prevention Center is continuing to control the oil spill using oil-treatment agents and adsorption mats. In addition, as soon as oil is confirmed to have drifted to the coast, oil recovery companies are prepared to perform beach cleaning.

The cause of the accident is meanwhile being confirmed, and investigative authorities are conducting an interview with the vessel captain.

“NYK has organized a crisis management center led by NYK president Hitoshi Nagasawa to rapidly address the situation,” it states.

“Company personnel have been sent to the site, and necessary support will be provided to the shipowner and ship-management company. We hope the situation will be bought to a safe and timely conclusion.”

In the initial stage, the partnership will explore the environmental benefits and commercial and operational feasibilities of various technologies.

Concept development and feasibility study aims for a moored barge to generate, store and provide hydrogen to vessels bunkering at the same port.