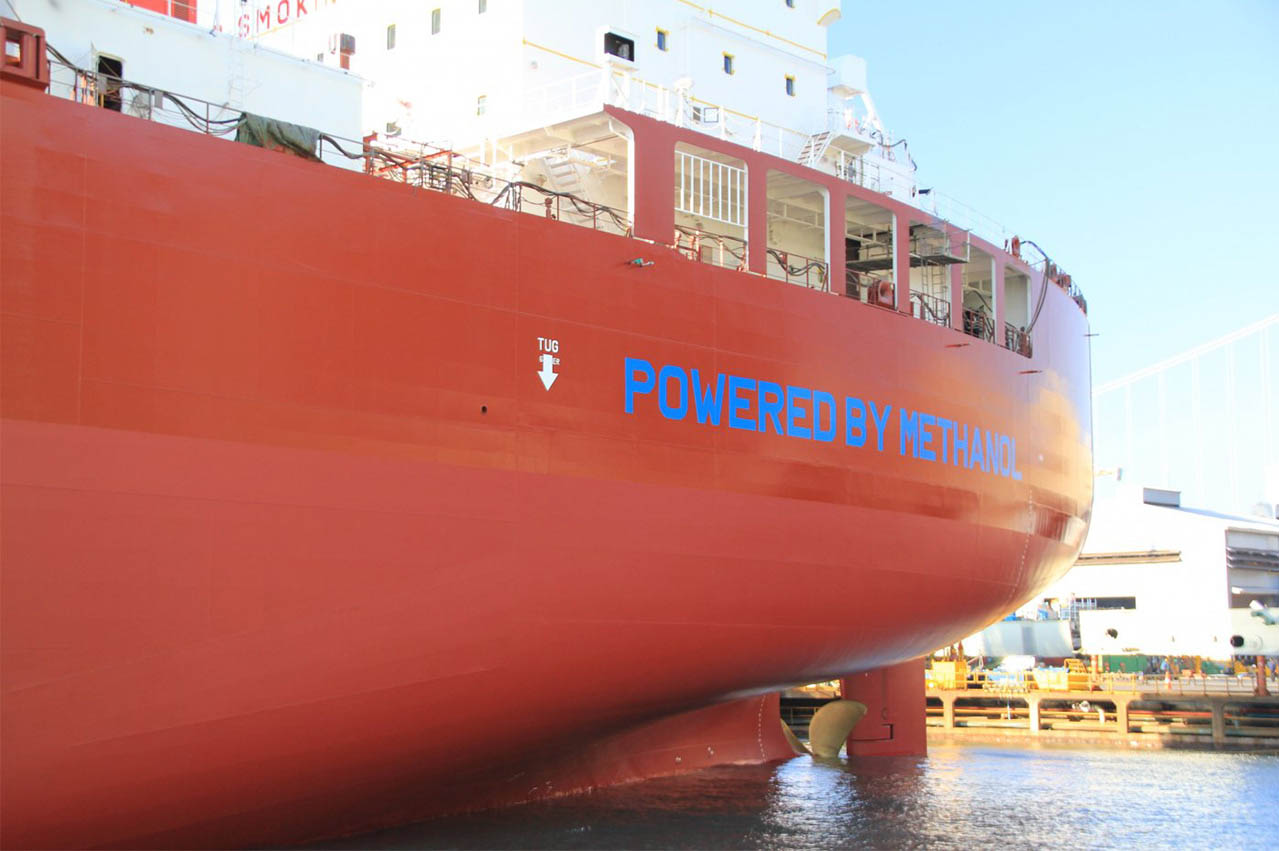 Chris Chatterton, Chief Operating Officer at the Methanol Institute, writes why adopting conventional methanol as bunker fuel is the shipping industry’s answer to its 2050 emissions target.

The ambitious goals for carbon emission reductions set by the IMO have prompted a surge of activity in the investment, research and development needed to produce the low carbon fuels that will power shipping into the second half of the 20th century.

The International Chamber of Shipping recently noted that meeting these goals – a 70% efficiency improvement as an average across the fleet, and a total CO2 reduction by the sector of at least 50% by 2050 regardless of expected growth in maritime trade – can only be achieved with the development of genuine zero CO2 fuels.

This will require the adoption of ‘radical and as yet unproven technologies’ including Hydrogen, Methanol and batteries, with LNG or conventional biofuels playing only a transitional role. Development of these new fuels requires co-operation between shipbuilders, engine manufacturers and classification societies, with research into new propulsion systems facilitated by governments within an IMO framework.

Despite the looming disruption of the 2020 deadline, the industry recognises the political need to start achieving carbon reductions before 2050 – something which can already be achieved by adopting conventional Methanol.

Critically, the ICS believes that to kick-start use of new technologies will require compromises in the form of permitting use of alternatives that are still derived from fossil feedstock but which offer very low ‘in sector’ emissions. In the longer term, as fuel from renewable sources become increasingly available, the ‘well-to-wake’ emissions will fall progressively.

The higher cost of conventional fuel expected post-2020 will not only begin to make Methanol price-competitive as a marine fuel, it also de-risks the investment in newbuilds and conversions, because owners can use conventional Methanol for 2020 SOx compliance then progressively blend in low-carbon Biomethanol as more becomes available to meet carbon emission targets after they are fully agreed in 2023.

A liquid fuel with simple and established safe handling practices, Biomethanol is the most attractive choice of the future biofuels, with no SOx and lower PM emissions than biodiesel and CO2 emissions are lower than those of LNG.

The shipping industry is already beginning to undertake the research it needs to drive the development of next generation biofuels. UK-based E4Tech has concluded that biofuels will provide substantial reductions in GHG and non-GHG emissions, offering a range of decarbonisation solutions in the short and longer term.

E4Tech was commissioned by the Platform for Sustainable Biofuels to draw up a master plan for CO2-reduction in the Dutch shipping sector using biofuels, analysing a range of products to understand their potential for adoption in the shipping sector.

Through qualitative analysis of GHG reduction potential, readiness of production, cost and compatibility with the current vessel fleet in each shipping sector. E4Tech concluded that Biomethanol is potentially a highly attractive option in terms of costs and GHG emissions reductions.

It found that growth in use of sustainable biofuels requires action by multiple stakeholders to address technical, economic and operational barriers. But it concluded that Biomethanol is highly attractive to the inland and short-sea shipping sectors because its energy density suits vessels with regular port calls, suggesting close dialogue with ports will be necessary to drive change.

Separate research undertaken by Lloyd’s Register and University Maritime Advisory Services for the Sustainable Shipping Initiative (SSI) concluded that biofuels could be the most feasible and cost effective means of compliance for some ship types.

Alternatives including hydrogen fuel cells, electric power and biofuels were evaluated using variable supply scenarios and different vessel types with results suggesting that biofuels are likely to be the most economically attractive for the post-2030 shipping industry.

The ability to use biofuels in a similar fashion to conventional fuels in an internal combustion engine means that additional investment costs can be kept low and the cost of running a ship on biofuel will mostly be dictated by the cost of the fuel itself.

The study highlights the need for sustainable non-food derived biofuels and that shipping may need to compete with other industries for supply, creating a potential upside risk to prices. And it also concludes that further research and development is needed into the performance, energy density and cost of biofuels for their viability to be better understood.

The recently-concluded Sustainable Marine Methanol (SUMMETH) project backed the increased use of Methanol as a marine fuel, concluding that there are no obstacles to its use in a converted diesel engine.

The project was designed to understand the technical feasibility and environmental outcomes from conversion of a smaller diesel engine. It studied a road ferry with an engine capacity of about 350 kW making short trips between the mainland and islands in the Stockholm archipelago, carrying people as well as cars.

It found that this type of smaller vessel conversion project is both feasible and cost-effective, with levels of safety that easily meet existing requirements. Switching to Methanol would offer immediate environmental benefits, including close to zero SOx and particulate matter emissions and significantly lower NOx emissions compared to conventional marine fuels or biodiesel.

SUMMETH concluded that there are no barriers to bunkering the road ferries, since this could easily be switched from diesel to Methanol, enabling the ferry operator to immediately reduce particulate emissions and progressively reduce carbon emissions as renewable Bio-methanol becomes available.

Finally, the MethaShip project, conducted under the auspices of the Research and Development Department at the Meyer Werft shipyard in partnership with Flensburger Schiffbau-Gesellschaft and Lloyd’s Register, considered prospects for a Methanol-powered cruiseships and ro-pax ferries.

Its central conclusion is that Biomethanol is a fuel with a future, one which offers the potential for implementing an ambitious maritime climate protection strategy. Some technical and financial details remain to be clarified before Methanol can be used more widely in shipping, however, in the medium term a breakthrough is possible if a statutory framework can be established to evaluate holistic evaluation of CO2 emissions reduction.

We are in a time of considerable uncertainty in the shipping industry, with 2020 looming and the IMO still to decide the details of measures to meet its ambitious carbon reduction targets. But for owners pondering not just how they will comply with 2020 but also with future carbon emissions reduction, there is strong evidence that Methanol can provide a safe, reliable and ultimately renewable pathway into the future of marine fuels.