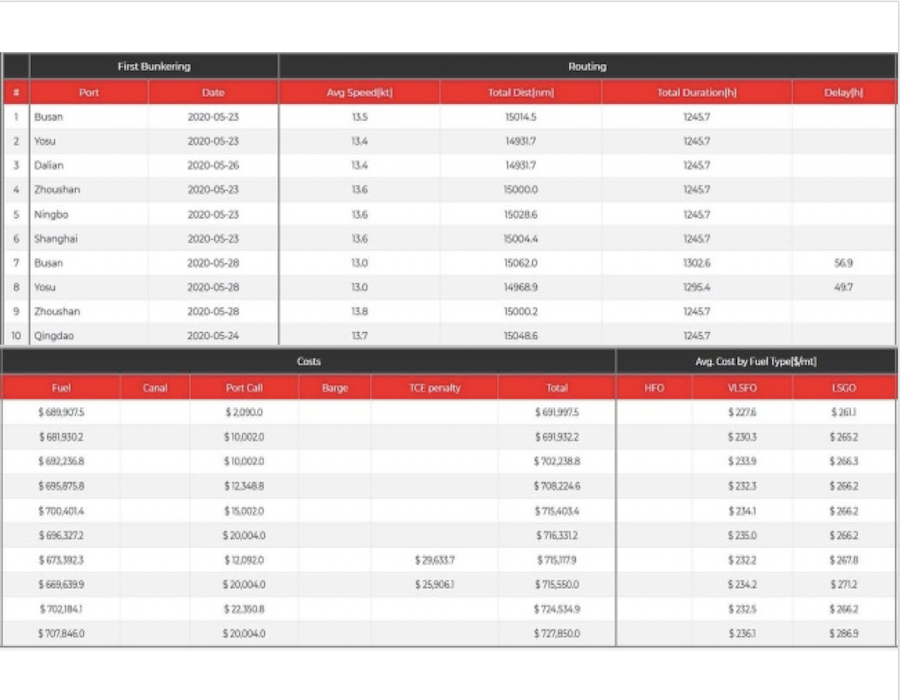 BunkerPlanner, a bunker procurement optimisation tool developed by Scandinavian maritime technology firm BunkerMetric on Tuesday (12 May) said it has rolled out new functionality to assist vessel operators to reduce costs under any market combination of time charter (TC) rate and bunker prices.

BunkerPlanner says it calculates attractive bunker port calls that can be induced on a voyage in relation to the costs of bunkers, port calls, barges, and deviations, while also taking into account a speed up of the vessel to meet a fixed ETA at next port call.

The bunker price of any additional port call must justify any speed-up, considering the vessel’s bunker curve and extra distance to be sailed, it stated.

This makes good sense in most high TCE markets, where the expected TC rates exceed the extra bunker cost of speeding up.

However, there is often an attractive tradeoff by adding a bunker port call and delaying scheduled ETAs while maintaining a fixed speed.

With this approach a bunker buyer would attain a lower TC rate but would save handsomely on bunkers – a beneficial strategy in low TC environments, it explained.

“Deciding on the cheapest port to bunker is a complicated calculation, which should not be reduced to choosing the lowest $/mt,” said Fernando Alvarez, Bunker Metric co-founder.

“Especially interwoven are the tradeoffs related to Time Charter Rate, Speed/Consumption, Deviations and Price, and are only possible to accurately overview with good system support.

“With BunkerPlanner’s tool you can easily save hundreds of $ in TCE per day, especially in low TC markets.”

The company notes the bunker prices in the example were locked on the 8th of April 2020.

It adds that in the current volatile bunker market this rapidly changes and early / mid May, South Korean ports would be preferable on this trade, depending on TC rate.

BunkerPlanner says its automated bunker planning tool is of great value in exploring such scenarios.

With this new functionality, which is already available to its customers, the program can even better assist vessel operators to attain significant bunker savings.

“By including TCE in BunkerPlanner’s calculations, advice can also be given bearing in mind the intricate interplay between the optimal speed for a specified voyage, the TC rate, bunker consumption, bunker costs, banal usage and ECA zones,” said Christian Plum, Bunker Metric co-founder.

“Considering all these factors together is powerful, and unique for a Maritime Digitisation tool.”

Move was done ahead of likely reformulations that will help ensure vessel operators remain compliant with evolving maritime regulations and operational requirements.

Testing of fuels include 100% biodiesel bunkers on commercial ferries and 100% renewable marine diesel on one of the port authority’s patrol boats at Port of Vancouver.