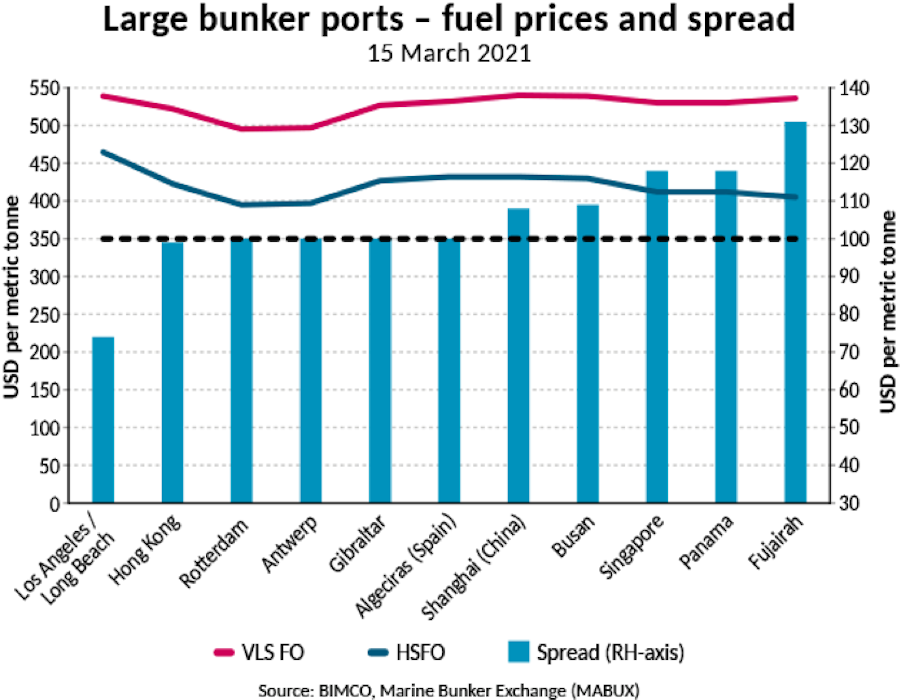 International shipping association BIMCO on Thursday (18 March) published its observations regarding how vital statistics in the bunker market affect scrubber installations as the LSFO and VLSFO price spread steadies; it was written by Peter Sand, Chief Shipping Analyst at BIMCO.

As the lion’s share of the world fleet replaced high-sulphur fuel oil (HSFO) with low-sulphur fuel oil (LFSO) as a mean of propulsion to be compliant with the IMO 2020 global sulphur cap which came into force on 1 January 2020, overall bunker sales rose in the world’s by far largest bunkering hub: Singapore.

Total bunker sale volumes grew by 5% in 2020 and have continued to climb in the first two months of 2021 (+2.7% y/y). An indication of the shipping industry’s ability to deliver all the way through the pandemic. One quarter of total bunker sales in February 2021 was HSFO, a share that has only risen since January 2020, when no more than 17% of sales were fuel oil for ships with a scrubber installed.

The USD 118 per MT difference

From the get-go, the debate was all about the bunker price spread and therefore the choice between HSFO and investing in a scrubber or using LSFO to comply with the new sulphur regulation. As 2021 arrived and the crazy 2020 was nearing an end, the next normal seemed to be in the making.

Prior to the implementation of the sulphur regulation, the then-watched MGO-HSFO spread hovered around USD 200 per MT, but it was clear that a new and lower spread would settle one point. As the ‘new standard’ LSFO is now established, the pricing of the product also seems to have arrived at the next normal.

Who cares about the price spread? Scrubber owners do!

Soon, 15 months have passed since the implementation date for the IMO global sulphur cap. During that time, the number of scrubbers installed on the world fleet has nearly doubled. From 2,011 ships on 1 January 2020 to 3,935 by 1 March 2021.

“There is a clear tendency that it is the large ships that burn most bunkers which have been preferred for scrubber installations. But it goes for all: as voyage costs are lowered, earnings are higher,” Sand says, adding:

“As the bunker price spread now seems to have found a steady level slightly above USD 100 per MT, ship owners and investors are increasingly likely to order new ships with a scrubber preinstalled today, when compared to the sub-100 dollar spread of last year.”

Pursuant to this, Adani ports did send out a circular banning open loop scrubber systems, but this was revoked after pressure from the trade, said the Standard Club.

Recommending a EGCS restriction without supporting scientific evidence is halting progress scrubbers have made towards carbon neutrality, said Executive Director.