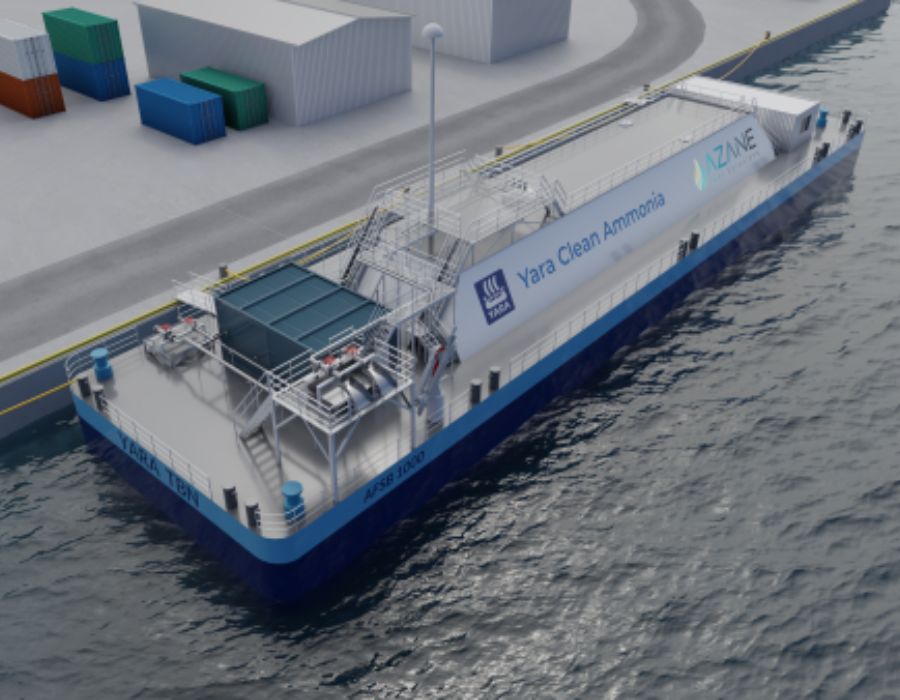 The approval from DNV is a major milestone in establishing the safety protocol for the bunkering of ammonia, enabling the uptake of ammonia as fuel to decarbonise the maritime industry, said Azane.

“Together with Yara International, we are moving as fast as we can to realise carbon free shipping with ammonia fuel,” shared André Risholm, Chairman of Azane Fuel Solutions.

Azane said it addresses barriers for ship owners and cargo owners to decarbonise by providing bunkering solutions for the clean ammonia value chain.

“The AiP is an important step in further verifying readiness for the commercialisation of Azane’s proprietary ammonia bunkering terminals prior to commencing construction,” it said.

“DNV’s AIP is an independent assessment of a concept within an agreed requirement framework, confirming the feasibility and soundness of a design with no obstacles that would prevent the concept from being realised.”

Providing a technical solution and infrastructure to implement ammonia as fuel

Azane sought third party approval to verify the safety of the floating bunkering solution, demonstrating the robustness of the system for commercial deployment.

The approval enables Azane Fuel Solutions to strengthen its position as the leading provider of safe, turnkey bunkering terminal for the maritime industry. Additionally, this approval fits within the larger strategy for the company of forging a new safety protocol for ammonia bunkering in Northern Europe, with plans to expand safe ammonia bunkering globally.

“Safe and efficient bunkering infrastructure is necessary to decarbonise the shipping industry with clean ammonia fuel. We are pleased to note that our partners in Azane Fuel Solutions have now received the approval-in-principle for ammonia bunkering terminals, moving one step closer to construction start,” stated President of Yara Clean Ammonia, Magnus Ankarstrand.

Following the approval from DNV, Azane and Yara will initiate an approval process with DSB (Norwegian Directorate for Civil Protection) to establish several bunkering locations in Norway and Scandinavia.

“Together with Yara, we are moving as fast as we can to realise carbon free shipping with ammonia fuel,” says Chairman of Azane Fuel Solutions, André Risholm.

USTC acquires BunkerEx to streamline digitalisation across its group

BunkerEx provides accessibility and optimisation for bunker fuelling costs, which makes it the ideal fit for USTC activities within the shipping and logistics industries.

Programme will have a special emphasis on the potential application of the system for methanol-fuelled Maersk vessels.