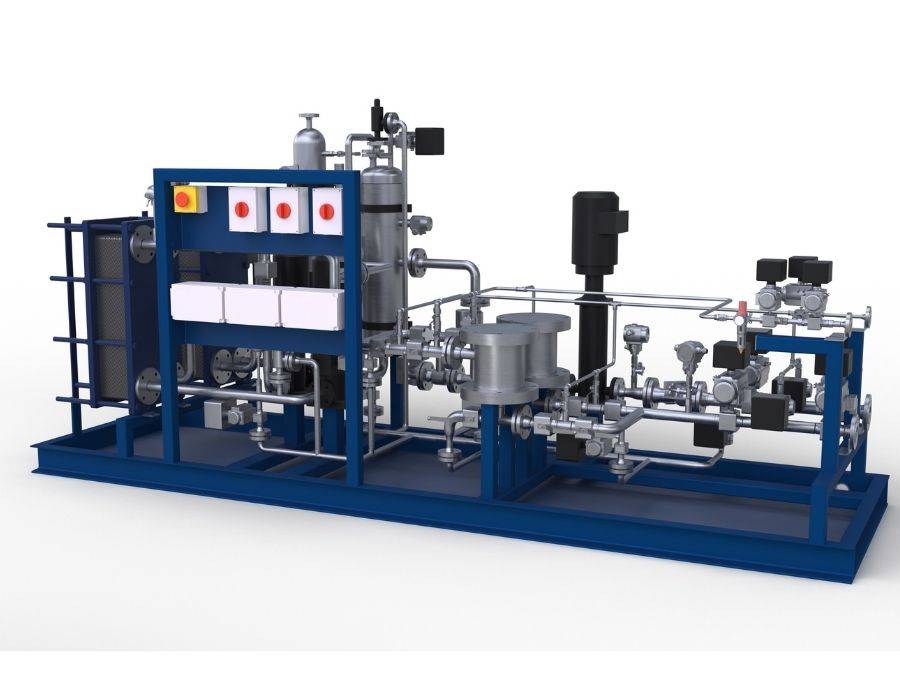 Fuel supply systems manufacturer Auramarine Ltd on Tuesday (31 May) said it has invested in the development of one of the industry’s first Methanol Fuel Supply Units to meet the demand for methanol as a promising future bunker fuel.

The units are suitable for both two-stroke and four-stroke engines and can be adapted to suit the conversion of existing engines to dual-fuel methanol operation.

Auramarine has already received significant interest in the units and is in advanced conversations with shipowners, operators, OEMs, and shipyards on supply and installation, and expects to deliver the first system in 2023.

“At Auramarine, we provide an expert technical review of a vessel or fleet’s fuel supply systems and determine the best possible adaptation of existing equipment to effectively and safely handle methanol and other future fuels such as biofuel and ammonia.”

Existing fuel oil tanks can be used for storage with little modification, as methanol can be stored at ambient pressure and temperature. Although methanol has lower volumetric energy density than LNG, the tank arrangements for methanol can still fit in a smaller space as no cryogenic or high-pressure infrastructure is required.

Auramarine’s Methanol Fuel Supply Units ensure the safe delivery of methanol from the service tank to the Master Fuel Valve, regulating the flow, pressure and temperature of the methanol to meet the specific requirements of the engine. The system actively maintains the supply pressure within the specified tolerances during load changes and filters the fuel to prevent any impurities from entering the engine.

A pilot fuel system is required for methanol operations in dual fuel engines, and Auramarine has extended its experience of pilot fuel systems for LNG to methanol supply to provide ship owners with single-supplier synergies.

In line with Auramarine’s mantra to provide fuel supply solutions for all types of vessels, the methanol unit can be applied as both a retrofit and for newbuildings.

A dedicated design option for constrained spaces allows the unit to be split into parts for smooth transport and installation, as well as for placing the unit in an optimal location onboard. The most straightforward solution is to install an Auramarine methanol supply unit into an Ex-compliant container on deck, but the system can also be installed in Ex-space below deck as one unit or in several parts, depending on the space available. All units are supplied pre-tested to shorten installation and commissioning times at the shipyard.

“Auramarine is committed to supporting the shipping industry’s roadmap to decarbonisation,” adds Bergman.

“With future fuel uncertainty leading to some ship owners stalling newbuild orders, we need to scrutinise every aspect of the supply process and analyse the supporting fuel supply infrastructure to ensure ship owners are empowered to make the right decision.

“Auramarine’s 40 years of knowledge and expertise has enabled us to develop a blueprint for bringing new fuels online from a fuel supply perspective. We have delivered more than 15,000 fuel supply and auxiliary units all over the world, and we look forward to supporting ship owners further at Posidonia in June.”

The application is in relation to an alleged unpaid amount of USD 268,095.42, pursuant to a deed of guarantee allegedly signed by the company, it said.

Maersk said it deems lignin fuels as potentially the most price-competitive net zero fuel with the lowest price estimate, almost on a par with conventional fuels.