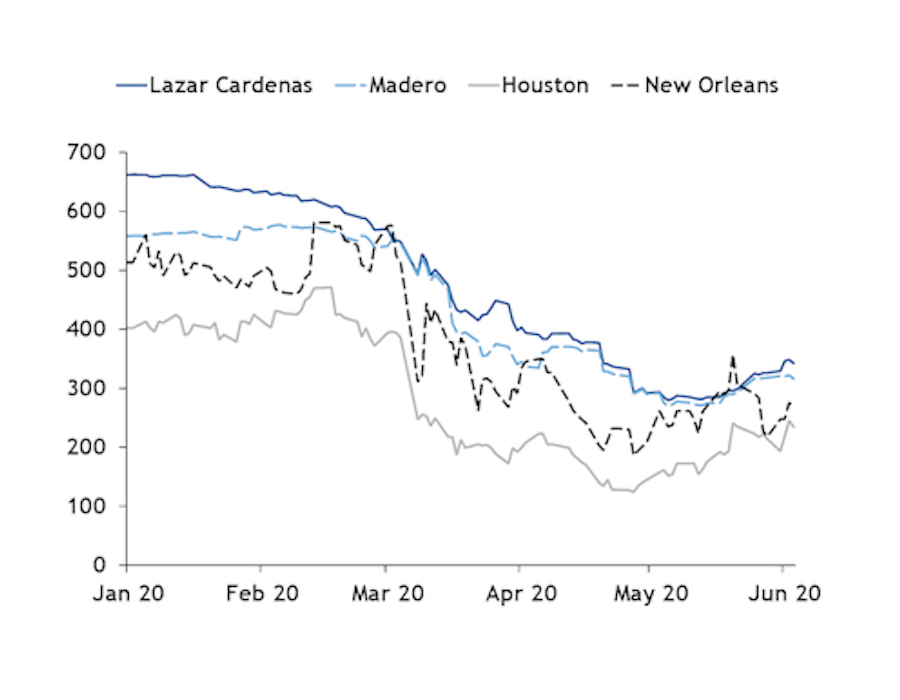 Sergio Meana, Stefka Wechsler and Rebecca Conan of the global energy and commodity price reporting agency Argus Media on Wednesday (17 June) published a report on Mexican state-owned oil producer Pemex’s possible strategies to cope with over production of HSFO as traditional channels become unavailable due to changes in prices and consumption trends:

Mexican state-owned Pemex is struggling to find outlets for its growing high-sulphur fuel oil (HSFO) production, an ill-timed side-effect of its drive to increase refining output given tighter marine fuel emissions rules and constrained demand from the Covid-19 pandemic.

Pemex’s HSFO production, with 4% sulphur content, reached 201,000 b/d in the week ended 1 May, its highest level since October, according to the latest data from the Mexican energy ministry (Sener). This is up by 35% from the same week of 2019, and almost flat with the 199,000 b/d produced the prior week.

Fuel oil output is booming as Pemex is on a drive to produce more refined products as part of a policy to reduce fuel imports. About 30% of every barrel that Pemex processes becomes fuel oil. Only three of its refineries — the 275,000 b/d Cadereyta, 285,000 b/d Minatitlan and 190,000 b/d Madero — have cokers that can process heavier feedstocks such as fuel oil.

Pemex exported about 84,000 b/d of HSFO and sold 63,000 b/d domestically in April. For domestic sales, a portion goes to domestic power generation, with fuel oil firing about 3.2% of Mexico’s 70 GW of installed capacity, state power company CFE said. Mexico may be using roughly 30,000 b/d of fuel oil for power generation, according to Argus calculations.

This leaves approximately 54,000 b/d in need of a destination based on April export volumes and early May production levels.

This comes as general consumption of all fuels has recently hit multi-year lows, and after International Maritime Organization (IMO) regulations banned the use of fuel oil with more than 0.5% sulphur in vessels without special emissions-scrubbing equipment.

The US is not a promising outlet either. Residual fuel oil consumption in the US reached its lowest point since January 2018 in the week ended 1 May at 35,000 b/d. It has since climbed to 199,000 b/d for the week ended 6 June, but that is still 40% lower than June 2019 levels, according to Energy Information

Administration (EIA) data. And while HSFO is being used as a substitute for sour crude as a feedstock for crude units, supporting a recent price increase, the US is mostly importing from Russia in addition to using Gulf coast HSFO.

Moreover, even if US demand returns, Mexico’s production would not be the first option. Prices from Mexico’s Lazaro Cardenas and Madero ports are typically higher than those in Houston and New Orleans (see table for detail).

Other traditional buyers of Mexico’s HSFO are also cutting volumes.

Data from oil analytics firm Vortexa showed Panama HSFO imports from Mexico dropped to about 43,960t (2,000 b/d) in the first five months of 2020 compared with about 308,758t (15,000 b/d) during the same period in 2019 consistent with the decline in HSFO bunker demand. Panama total HSFO imports were about 999,000t (49,000 b/d) from January to May, down from 2.08mn t (102,000 b/d) during the same period in 2019 according to Vortexa. Some of the HSFO barrels were sold locally to vessels equipped with scrubbers, some blended to reduce their sulphur content to 0.5% to sell as VLSFO, and others put in storage in Panama before being reexported.

One possible new outlet is Mexico’s state-owned power company CFE, which the energy ministry is urging to buy more of Pemex’s fuel oil for use in power generation.

The government’s efforts to support such efforts went as far as trying to close the door on new renewable power generation projects. Mexico’s grid operator Cenace suspended the launch of all new renewable power stations from 3 May, although the decision is under appeal.

Yet Morales added that using more fuel oil could be a logical step for Mexico.

“If for some reason we need to burn more fuel oil — we do not have a reason at the moment, but if we did — I would ask myself, ‘Why does Germany burn 38% coal?'” Morales said. “Because that is what they have.”

Maersk’s investment will be used to further develop and commercialise Vertoro’s patented liquid lignin technology, and to enable Vertoro to build a demo plant.