George Collard, Nana Kutin, and Enes Tunagur of global energy and commodity price reporting agency Argus Media on Wednesday (14 April) published a summary on the factors behind the fall in HSFO prices and possible implications for the bunker market:

Ample supply of high-sulphur fuel oil (HSFO) in northwest Europe has widened the “scrubber spread” between the price of 3.5% sulphur product and IMO-compliant 0.5% fuel oil.

The price of delivered HSFO in Rotterdam has declined by nearly $20/t since 26 March, but 0.5% fuel oil has risen by $5/t over the same period, broadening the spread between the two grades from under $90/t in late March to $111/t yesterday, the widest in a month.

Abundant supply has weighed on HSFO margins to crude in recent weeks, with the notional discount to front-month Ice Brent futures hitting an 11-month low of $10.96/bl on 9 April. A flurry of cargoes taking HSFO from the Baltic Sea to the Amsterdam-Rotterdam-Antwerp (ARA) trading and refining hub has piled pressure on margins because export opportunities remain limited. Baltic Sea fuel oil exports to ARA reached a 17-month high of 1.33mn t in March, up from 915,000t in February, according to Vortexa data.

Fading transatlantic demand for Russian Baltic fuel oil drove the cargoes to northwest Europe. And this rise in inflows from the Baltics coincided with fewer arbitrage departures from ARA to Singapore, the world’s largest buyer of marine fuels. Meanwhile, Middle East demand was the main supporter of European HSFO margins in March, with around 610,000t of fuel oil exported from ARA to the Middle East last month, the highest since at least 2018 according to Vortexa.

The bigger the discount for delivered HSFO to 0.5% fuel oil, the quicker the payback time for a shipowner who has purchased a scrubber. Scrubbers are marine exhaust gas cleaning systems that have allowed ships to continue burning HSFO since the IMO’s 0.5% sulphur cap came into force last year. At the start of 2020, Rotterdam’s scrubber spread was above $300/t. But when the onset of the Covid-19 pandemic triggered a collapse in transport fuel demand in March last year, the spread narrowed and spent most of 2020 under $70/t.

The price of 0.5% fuel oil fell significantly last March as bunker demand declined, but HSFO values received support from export demand for use in US cokers and for power generation in Asia. The narrowing spread last year led to scrubber demand dropping off after a rush of orders ahead of the IMO cap. According to data from shipping classification firm DNV GL, the number of ships fitted with scrubbers shot up in 2019-20, with over 4,375 in operation or on order globally at the end of last year, compared with just 731 at the end of 2018, but that tally will go up by fewer than 200 this year.

HSFO consumption in Rotterdam was strong in the last quarter of 2020 after ships retrofitted with scrubbers during the year returned to sea. But with few scrubber-fitted ships set to return to service this year, HSFO bunker demand may have peaked. Bunker demand in Europe has been weak this year, with HSFO supply in Dutch ports more than a third lower in January than in December, according to the latest data from Statistics Netherlands. 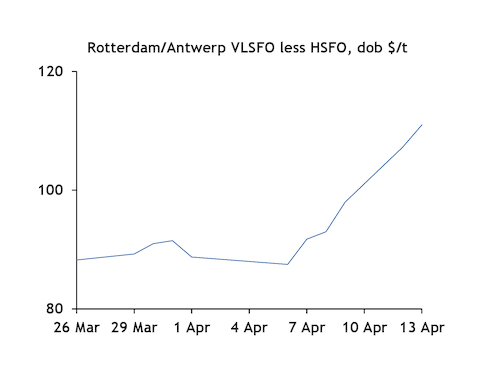 Any person who intends to appear on the hearing of the winding up application must serve on or send by post to Grant Thornton Singapore’s solicitors.